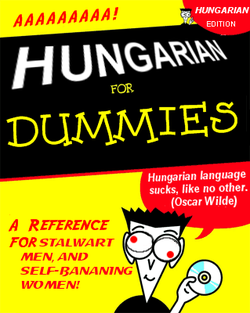 Learn at your own risk.

The Hungarian language (written in classical Hungarian notation) is an Oogry-Moogric language spoken by very hungry people on the floodplains of European Aborigines and in adjacent areas of Romania, Slovakia, Ukraine, Serbia, Croatia, Austria, the Roman Empire, and Slovenia (all these territories were lost in the backyard after World War I).

There are about 0.5 billion speakers, and everybody likes them, except a few people in the Balkans. Hungarians believe that they are the overlords of the universe, even though their country is small as hell and they have never won any wars, not unless they could confuse their enemies to death with their agglutinative language and unique brand of absurd reasoning.

The language will not die out in the same way that Romans did, as nobody is able to get a handle on the 65 grammatical cases of the Hungarian language.

Hungarian enjoys international acclaim for its gratuitous overuse of z's, most spectacularly manifested in its creative spelling of the Old Hungarian word "szeksz" (today found mainly in place names; see further "The Taboo Phenomenon"). An average Hungarian greeting, conversation and farewell is like speaking to someone with Tourette's Syndrome.

The Magyars, the original Hungarians, arrived in Europe in 900AD. For this reason they were not well-liked by their neighbours, and indeed the Emperor of Germany had to raise an army of some 150,000 people so that the Magyars might be enclosed by a human wall, and shat upon for the next one thousand years. The 'human wall' was deconstructed or abolished in 1974.

Hungarians are exceptionally good at football, chess, mathematics, equestrianism, shouting and raping. They are mind-stunningly unfriendly.

The relation to Finnish can be illustrated with these examples:

There is a strong relation between Italian (hung. digó) and Hungarian, even their flags are are very similar. Interestingly, the Hungarian flag predates the Italian. Here are three examples:

Hungarian has very unique linguistic origins. In the 7th century, the Magyars originally spoke an obscure language known as 'Szérgyplőt', which was an aurally displeasing mix of German, Finnish, and native vocabulary unpronounceable to non-native speakers. Grammar was 'almost as loose as Melania Trump', according to Betty White (who was in her 70s when Szérgyplőt was the lingua franca of the Magyars) and communication was difficult as the displeasing mix of vocabulary was hard to master.

Therefore, the leader of the Magyars set to change this by inventing a totally new (and even more displeasing) language. Obsessed with money, he made it so that the only words that remained from Szérgyplőt were those which dealt with money, and acquired the remaining 5 or so billion from forcing North Korean prison inmates to frantically come up with new and unique words by rearranging the 78 letters of the Hungarian alphabet. If one of these inmates invented a word that was too easy to learn in the leader's eyes, as discipline they would be forced to invent yet another case in the Hungarian language. There are now roughly 642, although only 527 are used in daily conversation.

From this immersion with Korean speakers, the leader adapted and butchered their grammar as best as he could, and with this vocabulary and this complicated grammar system, he finally settled on the set of rules for the language now known as Hungarian. Back then it would take roughly 78 years to learn basic greetings, but nowadays the Hungarian people have simplified their language and one can easily learn the language with only 50 years of exposure.

Of the seven billion words that exist in Hungarian, 6.5 billion deal with the concept of "money", or lack thereof. The remainder deal with telling people who don't have any money to fuck off. This unusual imbalance in the vocabulary points to the fact that (despite their unusually large brains) Hungarians are so obsessed with (other people's) money that they will do almost anything to get it - except work. Indeed, there is no real word in Hungarian for "work", the only existing lexeme being "munka", which is a loan word from Slavic, meaning "torture, horror, humiliation". Those people who do not possess money are referred to as "paraszt(ok)" ['peasant(s)']. This unfortunate underclass makes up 99.9% of the Hungarian population. The other 0.1% of the population are alien overlords, who run strip bars, copulate with hamsters, stare at their own faeces in specially designed toilets, and generally believe that the world owes them a living, because they are alien overlords.

One of the features of the Hungarian language that baffles most people is vowel harmony, a long-distance assimilatory phonological process whereby the same kind of vowel is used throughout a word and any of the subsequent 65 cases. This feature is thought to have developed to prevent strokes and other cerebrovascular accidents from occurring in earthlings when they try to communicate in Hungarian. Indeed, in some cases vowel harmony is used throughout entire expressions, as the brain gets stuck using one set of vowels, and cannot stop using them without risk of massive hemorrhage.

These examples are taken from the Hungarian national anthem "God Praise Cicciolina, Horse Cocks, and Goulash"

The effects of vowel harmony on the Hungarians' inability to appreciate variety is as yet unknown, and requires further research.

By European standards, Hungarian has a hugely underdeveloped system for expressing levels of politeness. Most Hungarians go around saying everybody else is stupid, and most verbal exchanges involve the excessive use of profanity. Common phrases include:

These phrases are generally used as greetings or expressions of affection, especially in discourse with foreigners. Also, Hungarians make frequent use of the phrase "(baszd meg) a kurva anyádat" [lit. '(fuck) your whore mother'] when expressing agreement.

Even though Hungarians consider themselves to be a hospitable people, they will frequently abuse you in their impenetrable tongue and rip you off when you go and visit them.