The Book of Boba Fett

The Book of Boba Fett is a 2021 American space-western-gangster TV series set in the Star Wars universe for the streaming service Disney+. It was created by Iron Man Jon Favreau, who was also behind The Mandalorian along with Avatar Dave Filoni. The series takes place after the post-credit scene of Chapter 16 of The Mandalorian aswell as the first flashback taking place a few hours after the bit on Jabbas' Sail Barge in Return of the Jedi. The show follows Boba Fett and his trusty side-kick Fennec Shand, who are trying to become Tatooine's next Lolly Lords.

It is not an actual book, or a novel, or a short story, or a brochure, or any piece of paper with words on it related things, as many had speculated when the series was first announced in late 2020.

Much like The Mandalorian, The Bad Batch, and the Marvel series on Disney+, each episode (or chapter to be exact) of The Book of Boba Fett is released weekly on a Wednesday. 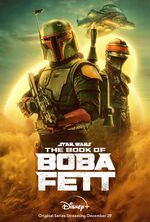 Boba and Fennec do some cool poses for promotional material.

For those without comedic tastes, the so-called experts at Wikipedia have an article about The Book of Boba Fett.

Chapter 1: Stranger in a Candy Land[edit]

Boba and Fennec have taken over Bib Fortuna's, formerly Jabba the Hutt's, Candy Castle on Tatooine. As Boba is taking a bath, he has a flashback to when he was soliciting sex from a Sarlacc Pit and how afterwards he was mugged by Jawas and then adopted by a tribe of sand people. In this flashback he also remembers the time he fought a six armed lizard man and decapitated it, without winning a prize. In the present, Boba and Fennec enter a Candy Strip Club where they introduce themselves to the owners, the patrons and the rest of the Candy City citizens. Upon returning to the Candy Castle, the pair are attacked by Red Sugar Assassins. Boba and Fennec kick some ass, aswell as their two Gamorrean bodyguards.

Chapter 2: The Tribes of Candy[edit]

Boba and Fennec are told that the Mayor of Candy Land was the one to send the assassins to kill them. However, the Mayor denies the allegations. Boba then comes face-to-face with the Lolly Twins, Jabba the Hutts two younger cousins. The two Hutts tell Boba that they want to rule Jabbas former kingdom and that he would just have to find another throne to overtake. When Boba tells them to go "get diabetes", the twins send out a black Wookie, as if it was like a Pokemon battle. Boba and the Wookie exchange a few glares before the Hutt twins get bored and just leave. In another flashback, Boba steals some speeder bikes and teaches his adoptive family, the Tusken Raiders, to ride them. Boba and the Tuskens then plot a train heist (cause no Western wouldn't be complete without a train heist) owned by the Pykes. The Tuskens and Boba rob the train but are disappointed to find that the train only had lollipops on board. Boba is then given a makeover by the Tusken Beauty Department, before the episode ends like it was the video game Just Dance.

Chapter 3: The Secrets of Candy Land[edit]

A concerned citizen begs Candy Lord Boba Fett to 'deal' with some goth, half human-half droid teens who have been stealing soft drink. Instead, Boba hires the teens for less than minimum wage. Boba has a flashback to the time where his new Tusken Raider family was killed by a gang of bikers. In the present, the Black Wookie, known as Choc-Chip Cookie, attacks Boba while he is sleeping on his water bed. The teens and Fennec then trap Cookie in the Rancor cave. The morning after, the Hutt Twins show up and gift Boba his very own Rancor to replace Choc-Chip who is currently in it. Machete from Spy Kids makes a cameo appearence. A speeder chase in the city breaks out when Boba and Fennec pay the Mayor a visit, who turns out to be working for the Pykes (who are from The Clone Wars and Solo).

Flashback time. Boba is camping out with his Bantha eating fried frog-rats. He sees a white flare which indictates that this flashback is set during season 1, episode 5 of The Mandalorian. Boba finds an almost dead Fennec Shand, and so, he takes it upon himself to save her life - cause he's just that nice of a bloke. He takes her to a robot repair shop but the guy working the nightshift there says that he can only fix droids, not humans and that Boba should take her to a hospital instead. Instead of pointing his sharp stick at the man, Boba offers a lot of money. Fennec is saved and offers to help Boba with his mission; to reclaim his ship, the Slave I. Boba and Fennec sneak into Jabba's Palace like ninjas and steal, I mean it's not really stealing if it's his own ship, so more like take back his ship. They succeed and then go on a killing spree on the biker gang that killed Boba's Tusken Raider tribe/family. Boba then goes bungee jumping into the Sarlacc Pit after blowing it up with one of those silenced nukes that Jango used against Obi-Wan Kenobi in Attack of the Clones to retreive his signature green armour - which he doesn't know was stolen by Jawas.

Back in the present, Boba watches Krrsantan rip a guys arm off in the Candy Strip Club and so he asks the Cookie Wookie Dookie Warrior to join him at a crime get together dinner party.

This section will be updated when the episode releases. Jan 26

This section will be updated when the episode releases. Feb 2

This section will be updated when the episode releases. Feb 9 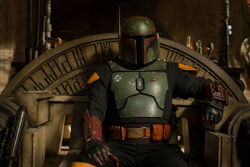 Boba sitting on his Candy Throne.

After first appearing in The Mandalorian as a live-action character, and then going back in time to be an animated character in The Bad Batch, Fennec now returns in live-action form, still played (and voiced) by Ming-Na Wen.

So far, the reception to the first three episodes to The Book of Boba Fett have been mostly positive, although many still believe that it shouldn't have taken this long for a standalone Boba Fett film or series.

Mark Hamill has also teased in an interview that the finale episode, Chapter 7 may elude to his 1981 suggestion to Lucas by revealing that Boba Fett is infact Luke's mother.