General Maximilian 'Walker' Veers was a General in the Empire. He is most famous for delivering various presents to the Rebels on Hoth despite being under heavy fire, and for creating the finest AH-AH (All Haired Armoured Hat) model.

The Life and Career of General Maximilian Veers[edit] 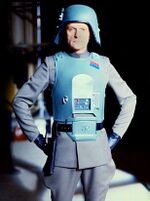 In all of his glory.

Veers never flinches no matter what (if you know what I mean for this pic). 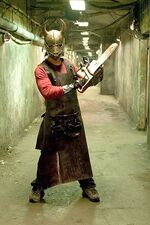 Not even if this was in his bathroom.

To some, he was known as the greatest Imperial General in history, but to those close to him he was the greatest BBQ chef ever to grace the Empire. Born on the planet of Coruscant, he was the son of a poor factory worker and he dreamed of being a lights operator at the local disco. When the soon to be General came of age he applied for a job at The Emperor's Mega Disco Arena (it is disputed if the establishment was truly mega, but Imperial Historians agree that it was certainly discotastic). Not long after Veers received the job came the night that would change his life, the night that Lord Vader came, the true Lord of the Dance. Sporting an enormous afro and platform shoes, the Dark Lord was said to have calmly walked into the arena and bellowed forth a challenge: anyone who could beat him in a dance off would be made an Imperial officer. In his memoirs, Veers wrote that he felt compelled to rise to the challenge, for he said that at that moment he realized that he needed to make something of himself. An eyewitness to the event described it like so:

"Vader and Veers started at opposite sides of the dance floor and stared each other down. Veers didn't even flinch as the music began to play... it was Grand Moff Tarkin's hit single, Burn Rebel, Burn."

Veers left Lord Vader completely astounded, and the Dark Lord was said to have yelled forth, "You have matched my disco skills and I am beaten... it is your destiny to become an officer".

After Veers graduated top of his class at Carida, Vader followed through on his promise and made Maximilian Veers a Colonel, and later Major General, of the Imperial Army. Shortly after this, he ensured that the All Terrain Armoured Hat was deployed throughout the Galaxy. He also requested permission to develop an advanced model of the AT-AH, the All Haired Armoured Hat or AH-AH. Previously, the AT-AH onboard defenses had killed anyone with blonde or brown hair, and no one had bothered to correct the problem because Imperial Grey and Black were traditional hair colours. Surprisingly, Veers was granted permission, and the AH-AH would be deployed in many battles.

A few years later, Veers continued to fight for the Empire. When the Death Star was destroyed at Endor, Veers didn't flinch, as he was focusing on a coooking career (he was cooking dead Ewok bodies). He was later hired by the blue guy with red eyes to be cloned. Veers said to himself, what will this benefit? and declined. While serving the dead Empire, a psycho commander came and later sent Captain Veers on a kamikaze style suicide mission. Veers took the time to think, die as an unknown chef or become a Food Network star. Veers declined the kamikaze mission and left the Empire. He proved his worth in the war against the Rebels in battles like Hoth and Balmora, and after the Empire's surrender many years later, Veers wrote his letter and retired to pursue his other great passion, cooking. He later had his own Food Network show called Maximilian Live! He spent many years on this show cooking Ewoks and other Star Wars aliens.

He opened his restaurant on a planet called Byss, a lightly developed world close to the Galactic Core. It was called The BBQ Emporium and Gift shop, and it soon became a main tourist attraction on the planet. With such savory delights like Grilled Ewok and Sullustian Sausages, it was a hit with food lovers throughout the galaxy and even with former Rebel commanders. He eventually formed a business partnership and lifelong friendship with Lando Calrissian, and they worked together on bettering the restaurant.

Not much is known about the General's current whereabouts, but it is thought that he is on a much needed vacation after so many years of working. There are rumours that he has been sighted one Endor, acquiring more Ewok's for when he returns to his resturaunt. Another rumor appeared that he was killed by a Grue during the battle of Tokyo.

General Maximilian Veers had a huge dislike for the silly and stupid Admiral Ozzel, attempting to take suicide pills when Ozzel joined the Imperial Academy on Carida. It has come to people's attention that Veers never flinched. Obviously, if you see the movie, he doesn't even move when those snowspeeders fire at him. Also, just look at the random pictures, they say Veers never flinch if he saw them. Veers also had a nickname called Walker. This was for the creation of the AH-AH and AT-AT. Veers also had an obsession with cooking, he almost even tried to cook the cooking rat from Ratatoille when they were cooking fried chicken with watermelons.

A tribute to him

An ode to his undying friendship