For those without comedic tastes, the so-called experts at Wikipedia have an article about Death Star.

The Death Star refers to two small moons that are not small moons at all, but space stations. The first Death Star was built a long, long time ago in a galaxy far, far away. This is also true of the second Death Star. 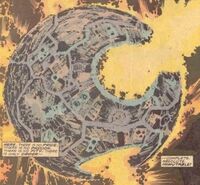 The second Death Star under construction.

The brainchild of a small corporate cabal of delusional Neimodian businessmen, the Death Star was initially envisioned as a monumental flagship that would unify the separatist worlds into a twenty year long construction project, whose costs would bankrupt the CIS during their three year war of independence.

Initially hiring Chinese contract labor, Sidious (by this time known as Emperor Palpatine) decided to shift to Wookiee slaves, to narrow down the language barrier and after a group of workers in the south sector walked off the project site with the schematics and built a bootleg Death Star of their own that played MP3s and had 8-bit GUIs. This bootleg version existed for a total of seven days before shutting down and crashing into the fertile planet of Arrakis, turning it into a wasteland and mutating its worm population.

After an inauguration notable for a particularly disastrous superlaser ribbon cutting ceremony, control was handed over to Grand Moff Wilhuff Tarkin, a man notable for continuing debate over whether his title or his name are more disastrous.

Under Tarkin's watch, the Death Star was famous for being the galaxy's largest productivity wasting meeting room and the largest detention center to hold a total of one prisoner. The big-ass laser would go on as well to blow up a total of exactly one planet, which had a total confirmed population of three.

Unfortunately, due to major defects in construction, this space station did not last for long. Imperial records state faulty wiring on an air conditioning valve caused a gradual critical meltdown, blowing up the reactor core; the Nemodian construction firm responsible for implementing the design flaw were successfully sued by the families of the millions of guys with British accents and Jango Fett clones killed.

Being built in a top secret location known only to Ewoks did not help speed up construction time on the second Death Star; so, Imperial contractors cut corners, constructing less essential decks out of wood and rice paper.

The first Death Star was a fully armed and operational battle station, with a full complement of turbolasers, missile launchers, freeze rays, death rays, disintegrator rays, manta rays, sugar rays, and Ray Charles recordings. Its numerous floors were divided accordingly into defense, administration, a golf course, fine dining, a discotheque, and VHS rental store. The seven washrooms aboard were capable of accommodating dozens of people at one time. It had a fully working kitchen area, with dishwasher and microwave oven, for all those Stormtrooper Burritos. On the 7th level, there was a Food Court with a Taco Bell and TGI Friday's; Darth's Laundromat, and a two-meter-wide hole capable of blowing it up.

The red light district was known as Ukiyo, the floating world, home to Geisha, Kabuki actors, sumo wrestlers, prostitutes and hoards of imperial storm troopers and officers. Like a kabuki stage, various trapdoors hidden in the floor led to trash compactors and airlocks.

Death Star as a weapon[edit]

So reliable is the deadly curse power of the Death Star that it has become a popular mechanism of assassination, the traditional approach being to point towards it in the company of the hapless victim, exclaim "That's no moon!" and watch as their head is caught on fire from orbit. It can also be used to blow up planets, but be careful because there's only so many.

The Superlaser had two generations. When Sidious' spy reported that a NVIDIA GTX590 had exploded because of a driver fault, Sidious came up with the idea of using NVIDIA graphics cards as a weapon. The first Death Star used 4x NVIDIA GTX690 SLI strategic laser emitter to emit the laser beam, and it successfully destroyed Alderaan. The Death Star II used a much more powerful laser emitter, 4x Titan Xp as the weapon, along with Intel Xeon Phi to navigate.