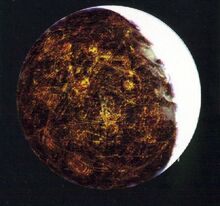 Dystopia wants to be this planet.

Dystopia is the twin planet of Utopia, with which it is locked in a joint orbit called a Death Spiral around the sun called Catholia. Dystopia is a rather large planet. Whether this is due to bodybuilding or overeating, it is hefty enough to make an excellent meal for Galactus, had the Silver Surfer and the Fantastic Four not neatly dispatched him on the way to helping select the place settings for Reed and Sue's imminent wedding.

Dystopia must have been Utopia's attempt to rip off of Coruscant; the two planets have many similarities. Like Coruscant, Dystopia isn't the prettiest of planets, is covered almost entirely in civilization, and traffic is terrible. On Vulcan, the population believes that large families promote "Infinite Diversity in Infinite Combinations (IDIC)," not to mention extra hands during the harvest. However, on Dystopia, a population much closer to infinity has only led to infinite couch potatoes fighting over infinite remote controls for the television, also to infinite tubby women wearing not-infinite-enough Spandex slacks (ICCK). It is like Detroit on a planetary scale, as if anyone still lived in Detroit.

Dystopia is one step ahead of Coruscant in the sense that it's "green," producing almost no emissions. This sizable investment had the pointless effect of preserving an environment that wasn't terribly picturesque to begin with. 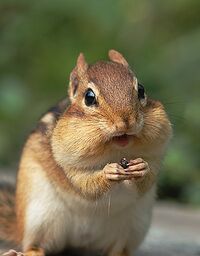 A Utopian dragon. Knowing these things are even in a 200-mile radius, who wouldn't want to move as far away as possible?

Dystopia was first colonized in 1820 — even before the Mormons set out westward from Illinois — after yet another tiny Utopian settlement had been torched by laser-firing, giant chipmunks (pictured). It was clear that, as pretty as Utopia was, the chipmunk problem was just a tad overwhelming. The Utopians needed another place to go, where they would not have to worry about the overgrown, sociable rodents sneaking into their homes in the night and stealing their children.

Dystopia was, in fact, not the Utopians' first choice for a homeworld-away-from-home. But Evora had already been claimed by tree huggers, and Kitiar by catgirls — two populations that simply belonged to all the wrong clubs. Dystopia was then lifeless, while the Utopians were clueless, a match made in the heavens. The first Dystopian settlement, Cornwall Town, was completed in 1882. But it would be far from the last.

As soon as the Utopians back home got word of the big happening on Dystopia, it was a complete and total land rush. More and more cities began to appear across the range of the planet, each new one more avant-garde than the last, each with more neon signs and left-turn-only lanes. Within the span of almost twenty years, practically the entire planet had been covered in cities. Only one small spot remained.

The eight final colony spaceships knew that only one of them would be able to claim that final municipal site. So things got ugly — uglier than your mom, though you might not agree. A gigantic space war broke out, in which fearsome weapons such as space missiles, eye beams, very loud techno music, and carrot sticks were used mercilessly. Only two ships survived. The first of these to reach Dystopia got the last piece of prime real estate, zoned R-1.

The crew of the remaining ship realized that every bit as effective as claiming unused land was to render used land unused. It thus obliterated part of another city, landing and building on the still-smoldering rubble. But the residents of the city that had just been wiped off of the map weren't happy. Yet another war broke out, which led to another, and another. Dystopia had become dystopian — and just like home.

Eventually a peace movement sprang up. The recording of the famous protest song 99 Luftballons was a key step toward the signing of the Treehugger Treaty. The song itself is technically a misnomer, as neither balloon transportation nor balloon warfare has been successful between the two planets.

Dystopia has become as synonymous for a society run amok as Utopia is for the concept of paradise, excepting a few scattered fans of Sir Thomas More who actually read stuff. Nevertheless, deciding between the two planets for a future home is not as cut-and-dried as it might seem.

Those who cannot decide whether to live on Dystopia or Utopia may benefit from the following comparison: