Who's The Justice Leaguer that's a sex machine to all the chicks?

Green Lantern is the wielder of the Bling Ring, an all powerful alien artifact created by an enlightened race of creepy, blue alien little people who spent their first millennium of peace and prosperity searching for the perfect high. He first appeared in the pages of Blaxploitation Comics.

Their quest for the perfect high and refusal to get regular nine to five jobs pissed off their wives and girlfriends to the point they moved out and formed a separate species, thus cursing the creepy blue alien old dudes to depend on their robot butlers for all eternity as their eternal punishment for never taking out the trash, vacuuming, mowing the lawn, or doing laundry or the dishes. The Creepy Blue Dudes (who prefer calling themselves the Guardians of Everything) couldn't figure out how to properly repair their malfunctioning murder machines, so they created the Bling Rings to lure in unpaid volunteers to the Green Lantern Corps to clean up their messes, so they'd still never have to lift a finger. The Green Lantern Corps, however, like all unsupervised work forces, spend most of their time screwing around offsite.

One particular lazy Green Lantern, Abin Sur, was hiding out after faking a sprained ring finger to collect Workmen's Comp. Ironically, while on Earth he did sprain his finger in a kegger accident, and was promptly dissected when he visited a local hospital for treatment. Just before being hacked open by curious scientists, Abin Sur sensed the latent funk soul power in the hospital's janitor, Dave Chapelle, and passed his ring on to him.

Dave Chapelle, like all Earth people, knew how to use advanced alien technology better than any of the stupid aliens that invented it in the first place did, and upon becoming the Green Lantern for our sector ( whatever the hell a sector is ), vowed to use his powers to uphold justice and goodness. To this end he founded the Justice League, fought lots of super villains, and slept with as many beautiful white women as possible.

Today the Green Lantern stands proudly as one of the coolest but most ignored superheroes. His exploits are often overlooked by most of the mainstream media, while a clip of Wonder Woman sneezing gets airplay on at least 5 cable news channels.

Lobo's stint as a Green Lantern lasted about as long as the radioactive half lives of the trans uranium asteroid fields where those planets he protected used to be.

Many have tried, and failed, to live up to the Green Lantern name brand. 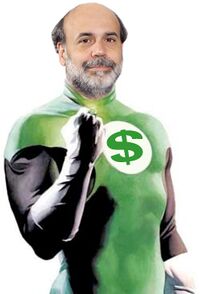 The Green Banker, can also make anything out of green, so long as he recharges his powers in his vault.

Although they carry the ultimate weapon, the Green Lanterns have jurisdiction over one of the 3600 voting districts of the universe, making them spread as thinly throughout space as a two dimensional Dirac sea. There's a number of trans galactic empires and planet wide dictatorships, like on Apokolips and War World, but their possession of WMD's ensures little action is made by the corps. If there's a war between say the feline evolved Tamaranian barbarians and the lawful bird winged people of Thanagar they won't stop them, to the lanterns that would be like stopping all the bears and mountain lions from hunting, they even maintain wildlife preserves for Xenomorphs. The Lanterns let Krypton explode and Rann be desertified by nuclear war, they let plague spread across Mars and Superman has a zoo filled with nearly extinct animals from worlds they abandoned. Don't expect them to shield the cities from a terrestrially bound worlds when their breaking up giant asteroids and fighting space pirates on the hyperspace highway; so if you want someone with more than a few thousand personnel to be breathing down your neck at all times watching your world 24/7, or whatever the rotation cycle there is, than call those independence hating communists at Starfleet.

The Lantern Corps has also been involved with a longstanding inter dimensional copyright infringement lawsuit with the Nova Corps over the exclusive use of the term super hero space police.

For those without comedic tastes, the "questionable parody" of this website called Wikipedia have an article about Green Lantern.

Green Lantern didn't really have to say anything to activate his ring, but got into the habit of reciting a ditty to put his adversaries on notice:

You who is wicked, evil and mean,
I'm the nastiest brutha you've ever seen!
Come one, come all, put up a fight,
I'll pound ya'll cripple asses with Green Lantern's light!

He is usually accompanied by a chorus of random men singing: "Go Lantern! Go Lantern!" or sexy female back-up singers who repeat whatever Isaac Hayes says in his omnipresent jazzy introductions.