For those without comedic tastes, the so-called experts at Wikipedia have an article about Peace Corps.

“We are peacemakers, not to mention peacekeepers.”

~ Peace Corps on themselves

“I was drafted into the Peace Corps and served five years in 'Nam.”

“This country needs a peace corps because the protection of peace by force is a primary objective of this free country!”

The United States Peace Corps is a wing of the military responsible for keeping the peace in a public setting, sort of like a nice way of referring to a secret police. Inspired by the ideas of former president John F. Kennedy, and ratified by Congress several months later, during the height of the Cold War. The original duty of the Peace Corps was to beat Hippies. Today, the Peace Corps has been stationed all over the world to maintain the peace in regions of the world where people aren't too happy about having an American military base. As of 2006, the Peace Corps has brutally assaulted and killed three times the amount of casualties and injuries in the Vietnam War caused by the US Army. 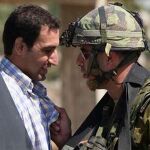 "Now, I told you once to be peaceful with those people over there. If I have to tell you one more time your ass will be hanging in my office"

During the Cuban Missile Crisis[edit]

The Peace Corps was first deployed during the Cuban Missile Crisis of 1962, when the United States cut off Cuba's missile supply for several days. The main job of the Peace Corps was to invade Cuba through the Bay of Pigs, cut through the Cuban military, and then beat Fidel Castro with an M-16 because he was a communist Although this would certainly spark an international war and possibly lead to a nuclear holocaust, the raid continued, and in 2006 it was finally successful.

During the Vietnam War[edit]

The Vietnam War was the next major deployment of the Peace Corps. During the Tet offensive of 1968, the Peace Corps was deployed into North Vietnam, with the goal of forcing the Vietcong to be peaceful through force, and beating Ho Chi Minh with an M-16. They were able to disable much of the Vietcong before they were able to get to South Vietnam after 1968, thwarting the Tet offensive using their combat knives (at the time the Peace corps's funding was cut, so M-16s were scarce for the year). Finally on September 2nd, 1969, they were successful at "beating the ass of Ho Chi Minh...to death". His death would be later covered up by the Vietnamese government as a failure of the heart.

Following the election of Richard Nixon, a new strategy in the war was developed. This new strategy of "Peace, with Honor" would be to send the Peace Corps down to Vietnam, and fight the Vietcong while thousands of gallons of Napalm would destroy the surrounding areas. After the strategy clearly did not break the spirit of the Vietcong, a new strategy of "Vietnamization" would occur, where the American troops quickly escape while dropping thousands of gallons of Agent Orange atop the Vietnamese jungles. Though the war in Vietnam was a complete and utter failure of the Peace Corps, Washington scapegoat John Kerry, took most of the blame for the incompetence, even though he wasn't even affiliated with the Peace Corps.

The Peace Corps in the US[edit] 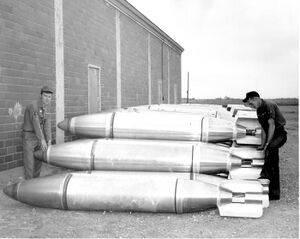 Although the Peace Corps was deployed into Vietnam, there were troops were still stationed in the United States. These troops took down Antiwar protesters near the Pentagon, resulting in seven dead, ninety seriously wounded, and ten with minor wounds(not counting Hippies). The Peace Corps would also be sent into the Kent State protest, where they were able to establish martial law onto the campus, establishing the peace needed during this time of war.

In the 1980s, rebellious Palestinian youth attempted to fight the Israeli Defense Forces with several limestone rocks, which was called the First Intifada. Though the Israelis did not ask for the assistance of the Peace Corps, due to the poor nature of the weapons used, they still came to stop the Intifada. The end result of the Intifada after Peace Corps interference was thirty dead, and fifty mortally wounded, not counting the Palestinian casualties. The mission was a success, and the Peace Corps had reestablished confidence in the Government.

During the Gulf War[edit]

The Peace Corps was actively involved in the Gulf War, where they had used depleted uranium rounds to control the populations of Iraq and Kuwait while the US Army dealt with Saddam Hussein. In addition to protecting the peace by assaulting citizens, they had also assaulted the presidents of neighboring countries - physically and by some accounts sexually(some debate that shoving a Stun baton into the buttocks of a world leader is not sexual assault). Another success was played by the Peace Corps, though unsung.

During the Iraq War[edit]

Due to reasons unknown, the Peace Corps had joined in on the Iraq War, and completely skipped the War on Terror, possibly because the Peace Corps was not configured to fight in such conditions. There, they were able to control Iraqi citizens rejoicing for the fall of Saddam Hussein. They were also able to stop several suicide bombings via napalm carpet bombings on troubled cities. Currently over 1/3 of all troops in Iraq are part of the Peace Corps effort, though it accounts for 2/3 of all confirmed kills in Baghdad and Syria. 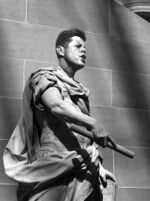 "The reason why this bill isn't passing quickly is because you senators are concerned about a situation which shall never happen! If I am wrong God should strike me down!"

The Structure and Capability of the Peace Corps has not been released to the public since the time of the Gulf War due to reasons involving terrorism, though many say that the structure hasn't really changed.

The Peace Corps is divided into three legions, each for different operations. The first is for operations inside the US. The second is for operations outside the US. The third governs NASA's extraterrestrial operations. Each of the legions are headed by a Centurion, and all the legions are controlled by the Emperor of the United States of America as a balance in the power that the President would have with the Army. Because of this, the Peace Corps can be sent to fight the Army.

The Peace Corps has 200 different offices in 251 different countries, and is ready to deploy any amount of troops to any place, any time to force a country to chill the fuck down. Over seven of the bases contain a helicopter for fast transport of troops, and four contain humvees. Due to lack of funding, the remaining locations have been given surplus bicycles from various landfills, though the preferred method of transport is via foot.

Clean up is arranged by the Peace Corps itself, often employing the use of the native peoples of the region that was brought peace.

Note that this time table is not approved by the White House. 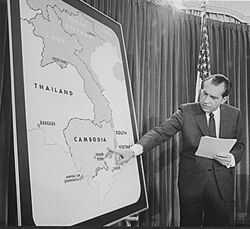 Without the help of the Peace Corps, communist radicals from Cambodia would have killed Checkers, a day which almost certainly would have been mourned by the nation

The Peace Corps since its creation during the Kennedy administration has had a significant impact on America, though the extent of the impact is yet to be determined. The military wing has touched the lives of millions of people with bullets, possibly more, and aided others with their deaths in their times of need. And what was the US going to do about the surplus Napalm left over from the Vietnam war? Who is going to save Nixon's dog from Cambodian Communists? Who was going to beat down innocent civilians in times of boredom? The Peace Corps was a viable solution to many of these problems and more.

The Peace Corps had also received many criticisms over the years as well. One of the most daunting ones is their apparent hippocracy of beating people into being peaceful. Officials from the Peace Corps have responded to these allegations over the years with tear gas. Some of the more vocal critics criticize the Peace Corps of being to totalitarian and "a secret police state". However, such allegations have been blown off as false by many respected members of the American political system including Joseph McCarthy, Lyndon Johnson, Richard Nixon, Bill Clinton, George W. Bush, and most recently Donald Rumsfeld. The reassurance from these respected politicians have always calmed the critics, whether by truth serum, or by the words alone. The Peace Corps is here, and it is here to stay.