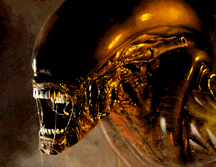 OH MY GOD, I WILL NEED TO BUY A NEW PAIR OF PANTS!!! Delicious!

“I'm going to breach the ships hull by causing an acid leak!”

~ An incredibly stupid person about to shoot a xenomorph

For those without comedic tastes, the "questionable parody" of this website called Wikipedia think they have an article about Xenomorph.

The Xenomorph is an alien that exists solely to kill you. Delicious!

This is not paranoia talking. Xenomorphs can be commonly seen running around killing everything. Xenomorphs exist for the sole purpose to seek out and kill you. A hungry Xenomorph will kill you and eat you. Xenomorphs are a super-evolved form of the Grue, which means that it is fucking dangerous to fight. You will die. You will be eaten. The only variance is whether you're eaten from without or within. They also have acid blood which is like lava, it can MELT anything. Except for some reason themselves. Their only documented weakness is being sucked out of airlocks on board interstellar spaceships. 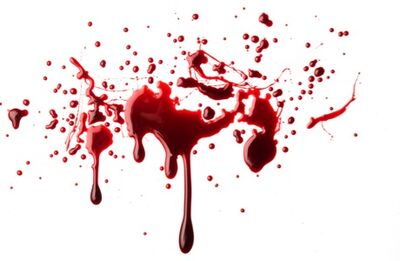 A typical victim of a Xenomorph. Delicious!

THE XENOMORPH WANTS TO KILL YOU!

And eat you. Raw. The Xenomorph can't cook. It would like to have a nice human being sautéed in clarified butter with some leeks, chives, crushed mint leaves, and sodium hydroxide sauce. Sadly, the aspiring Xenomorph gourmet invariably ends up burning the butter, dropping the the chives on the floor, and getting the pH of the sodium hydroxide sauce too low.

No human has ever lived long enough to be sure what happens to Xenomorph-slain comrades, except for Sigourney Weaver (a.k.a. Ellen Ripley), and she ain't talking. No matter how cleverly you think you hide yourself, a Xenomorph will always find you. They don't use eyes. They instead smell out your sweat, fear, blood, and usually urine. Of course they might have eyes somewhere, but nobody has examined one long enough before getting brutally murdered to find out.

Xenomorph blood is a strong acid, but when mixed with sugar and babies forms addictive low-fat, low-carb baby cake. However, this is not to be confused with LSD which, unlike Xenomorph blood, does not melt through your jaw when you put some on your tongue. Many LSD addicts can attest to this. Well, actually, they can't because they don't have a lower jaw. Oh, and a Xenomorph ate them.

Xenomorphs are constantly 0wn3d when encountered by fat kids. Just kidding. They killed and ate him too. Delicious!

Although no human (except Sigourney Weaver, of course, and possibly Machiko Noguchi, but really, Aliens didn't really show up in the book) knows what happens after a Xenomorph has concluded one killing spree, Spanish gorillas have documented several cases in which kittens befriended Xenomorphs and their little bastard alien counterparts. Accounts written by these turncoat kittens have given us a precious few glimpses of the Xenomorph culture.

A kitten participating in a Xenomorph rite of initiation. Delicious!

Xenomorphs inhabit barren, seemingly lifeless alien planets in obscure reaches of outer space. Or sometimes they live in temples beneath the surface of the Earth, possibly beamed down or built by the Xenomorphs' rivals the Yaujtas (who are also going to kill you, but slower and without sticking a sharpened penis through you). The Xenomorph temple takeover happened during a time when Antarctica was quite warm and would not turn one's ass blue in five nanoseconds, or basically otherwise had no snow whatsoever. Humans served as sport animals for the Antarctic temple-dwelling Xenomorphs, which is basically all they're good for. When Antarctica turned cold, the Xenomorphs retreated underground and subsisted on dancing penguins, plankton, and large quantities of drainall. 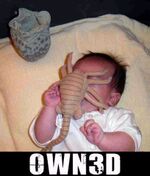 When knowledge of the nearly-extinct Xenomorph population became widespread, several organizations were created with the sole purpose of saving this almost-dead species. Experts, conservationists, and volunteers from around the world journeyed to Antarctica, where they were immediately devoured or impregnated. Surviving ecologists have since removed Xenomorphs from the Endangered Species list and placed them on the Extremely Dangerous Species list.

In this day and age Xenomorphs can be found living all around you. Under your kitchen sink, in your children's closets, and wedged inside your home ventilation system. Xenomorphs found in the toilet (known as aqua-xenos) are particularly ill-tempered and will kill you in an especially gruesome manner, up said toilet. It's only a matter of time before the attacks begin. Honestly, I'm surprised that you've lived long enough to read this paragraph. Wait, wait. Okay, move a little to your left. No, the other left. OK? Alright, now hold reeeeeeel still, aaaannnd... delicious.

Xenomorphs care for their young, teaching them Xenomorphese early on. Delicious!

When a mommy Xenomorph Queen loves herself VERY MUCH (and "herself" is used because it appears no fertilization or sexual processes are required for reproduction), eggs containing these seriously horrible spidery things (A.K.A. face-huggers) are laid.

If you are unfortunate enough not to be immediately eaten alive when the Xenomorphs find you, it means they're dragging your sorry ass off to one of these eggs. They'll glue you to the wall of their hive, set an egg right in front of your face and just leave. Resist the temptation to feel relieved by this, because what you actually face is a fate worse than death. Adding insult to injury, death will follow almost immediately afterward. And even if it doesn't it'll get pretty boring clinging to that wall until you starve to death.

Just when you're starting to think you might get out of this alive, the top of the egg will slowly peel back and in an instant a ten-pound spider will come flying out and have constant oral sex with you. You will again feel tempted to be thankful that at last you're being allowed to die. Resist this temptation! You'll need to have your wits about you so you can beg any shotgun-toting passers-by to end this hellish nightmare of a face and belly full of alien wing wong.

If that were you instead of Signourney Weaver, you would currently be absolutely boned. Delicious!

There you will hang weeping until suddenly the scary little snake-like Xenomorph larva eats you alive from the inside out until it manages to snap your ribs apart with its viscious claws and rip its way out of your chest. The slimy, bloody Chestburster Alien (technically a baby Xenomorph proper) slithers off to grow into the terrifying killing machine known as the Xenomorph (the entire process takes less than twenty-four hours) and the cycle begins anew.

Seriously, just shoot yourself in the head right now. At least it will be quick.

There are several types of xenomorph, all of which will kill you in seven seconds when you finish reading this sentence, , , ... nothing? Oh my watch is slow, wait ten minutes. Or better yet read this article. One weakness is ❦ 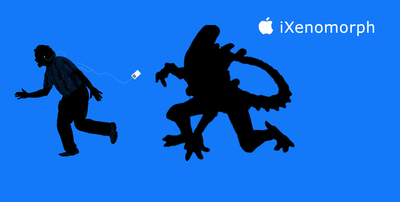 The iXenomorph, an especially vicious breed of xenomorph that will definitely make you run like hell. Delicious!