The novel Dracula is also available in paperback. 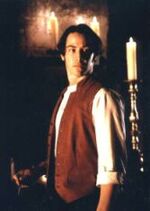 Today I arrived at last in the little village of Butpluk in the Carpathian Mountains. This is the village nominated by Count Dracula as the place I should meet his agent, Michael Fate of Grim, Black, Fate and Associates, who will convey me to the Count's castle in a Ford hire carriage.

How I do hope that I am successful in this enterprise! If my firm is happy with me I shall have a promotion! At long last, I shall be Junior Undersoliciter grade IIb! With an extra four shillings thruppence per annum I will at long last be making enough money to buy my beloved Mina a fruit bowl! Perhaps, when she realises how I have triumphed in the organisation of her melons, she will wish to marry me!

The locals are rather withdrawn. The landlord was friendly at first, but since I mentioned my business with Count Dracula he has treated me very oddly. Every time he sees me, he waves a crucifix or a string of garlic at me. I imagine that perhaps this is some form of local menu. I mouth "NOT HUNGRY" back at him and point at my stomach, but then he just laughs and makes a throat cutting gesture, and then mimes dying, while his wife tries not to weep helplessly. It's perplexing but there's nothing you can't solve with a smile. Glad I brought some sandwiches, though.

Explored the village, somewhat. The local children followed me around, pointing and laughing. Some fashioned little sets of canine fangs from orange peel, and mimed biting each other. After this strange act they would point at me and laugh again. Eventually, I put some peel in my mouth and sang "The British Grenadiers". How we all laughed and laughed then!

Passing the town church, the village priest stopped me and handed me a crucifix, a string of rosaries, a string of garlic, a jeroboam of holy water, a wooden stake and a book entitled Vampires for Dummies. I thanked him as best I could for this traditional present, whereupon he slapped me. He told me that this is a local custom called svorkua, or 'the slapping into sense'. What queer customs these foreigners have! I tried slapping him back but he just ducked and kicked me in my manroot. I managed to choke a "thank you", though. I don't want any trouble.

Dracula's coachman arrived shortly after nightfall. He is a tall man with glowing red eyes, huge horns, cloven feet, a black cape and a mocking laugh. I waved goodbye to the Innkeeper, who was making the traditional gesture of farewell, which involves standing in a predatory pose, baring the upper teeth and pointing to the coachman. I responded in kind, whereupon he rolled his eyes and returned to his inn to board up the windows with his wife and children. What a nice man! 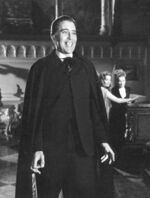 My word! What a nice big friendly smile my host has!

The Castle - arrived at last at my destination, a crumbling, overgrown castle surrounded by flocks of bats and packs of wolves. It has promise though. Remove the bats, wolves, crumbling and overgrown - set to work with a bit of WD-40, a buzz saw and a lick of paint - it could be a lovely place.

I was met by the Count himself, a tall, dark sinister looking man with nasty sharp pointy teeth and an indefinable aura of evil. No business cards though. Not professional. He took mine and pocketed it. I complimented him on his cape, stepped over his threshold and sat down to dinner.

He served a fine local wine, but would not have any himself. 'I do not drink wine,' he said, adding 'Just the blood of the innocent' under his breath. "What's that?" I asked, "Some kind of local tipple"? "Er, yes, he replied, embarrassed. It's a kind of ...ummmm... plum brandy". I told him about the WD-40, but he didn't seem interested.

Have sorted out the conveyancing on Count Dracula's new home in England. I would rather like to go home, but every time I try to leave the castle, I find my way blocked by wolves. What rotten luck. Maybe they're migrating. Give it a few weeks, and they'll have left the hallway. I have yet to receive any mail from my beloved Mina, in spite of having given the Count several letters which he put right into his 'wroklu' or 'letter-fireplace'. I expect the mails here must be awfully slow, since the postmen are bats. 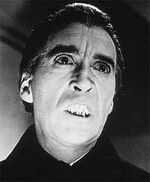 Look at the poor fellow! He really needs to get more rest.

Today I saw the Count and his three ghoulish brides feasting upon the blood of babies; as well as well as crawl downwards.. Thought "Oh". Weather continues fine.

Finally got around to reading that vampire book the priest gave me. It seems that, upon mature reflection, I am a fucktard. Yes indeed. A complete fucktard. A dimwatt, a blasted onion, a fool's scrotum and a fuckity fuck fucking fucktard.

Dracula has left for England; I suppose I'd better try to escape. If he gets to Mina's melons before I do, he could cause all kinds of havoc.

Today I was proposed to by a Doctor, a minor aristocrat and some sort of American Western stereotype. I think I'll marry the rich guy, as he has the largest. We made the "teapot and the stricken snake" 3 times in the drawing room. How's your junior solicitor going?

Whitby, Thurday The Russian vessel Czarina Katarina was wrecked upon the beach at Whitby. Locals naturally desired to leave the beastly foreigners to their well-deserved fate, but regulations imposed by unelected Eurocrats required them to go to the aid of the stricken vessel, which they did, with half-hearted British pluck.

The passengers and crew were all thankfully dead, each suffering from twin puncture marks in the neck combined with extreme loss of blood (a foreign disease), thereby saving the British taxpayer the cost of processing and repatriating them.

One of the patients in my asylum, one Mr Renfield, has been acting unusually strangely of late. He keeps eating bugs and talking through the window to a bat that he calls his 'Master'.

Mother was right, I should have been a dermatologist.

That goddamn cock-blocker, the Hon. Arthur Homewood came to see me. It seems that Lucy is sick. I thought of saying that if his fiance was sick why didn't he deal with it, but a house call fee is a house call fee.

Lucy's symptoms include two puncture marks to the neck and low blood pressure. I am at a loss to understand it, as I have not read June 15th's Daily Mail. I prefer the Sport. I will summon my old teacher, Dr. van Helsing. If anything goes wrong, I summon him and he fixes it. Last Sunday it was a leak in the washing machine. Then there was that wine stain on the stair carpet. He gets annoyed with all the summoning, but one more time can't hurt.

Dr. van Helsing has come up with a rather odd diagnosis. Vampirism, he says. It's exactly the same thing that caused the washing machine to break and the wine stain! I am relieved. Van Helsing knows a lot about Vampirism. I was pretty sure that it was really just a headache, but he was rather insistent. He points to recent changes in Lucy's condition as evidence; namely, her strange insistence on rising from her grave of a night to feast upon the blood of virgins. I took issue with him here, pointing out that cravings for unusual foodstuffs could be an indicator of pregnancy, and headaches.

3 pairs of socks. 2 pairs of underpants. One shirt (slightly bloodstained). One pair of trousers. A hat. Tie. Truss. One Prince Albert (rusting, but hardly used).

Dr. van Helsing visited after breakfast. His breakfast, not mine. It was 4am. He took from his doctor's bag a stout two-by-four with the words 'clue stick' painted on the side. He then proceeded to belabor me with said stick for half an hour, leaving me sore and bruised and yet convinced that Lucy is a vampire!

This morning I had a meeting with that bally prole Dr. Seward and some Dutch chappy, who seems to be a fellow medical wallah. Seems that m' fiance's a bally vampire. Bad business, that. Tonight, we're going to have to break into her tomb and give the poor gel's heart a bit of an old staking, dontcherknow.

6am. This morning I had a meeting with that bally prole Dr. Seward and some Dutch chappy, who seems to be a fellow medical wallah. Seems that m' fiance's a bally vampire. Bad business, that. Tonight, we're going to have to break into her tomb and give the poor gel's heart a bit of an old staking, dontcherknow. Oh, now wait a minute. I could have sworn...

Mr. Fucktard is home from Transylvania. I'm going to pretend I got amnesia, so I don't have to tell everyone what a fucktard I was and remain still. Didn't get my promotion, but I got Mina to marry me after she saw how beat up I got escaping from the castle. Her melons were all in disarray. Ah, sweet pity!

Sir William Batten was right - the Devil shits Dutchmen. Mina's skanky dead friend's doctor's mentor has been hassling me about Dracula. Apparently he's in England and going nuts with the whole vampire shtick. I mean, for Christ's sake, I come ALL THE WAY HERE, and that BASTARD follows me. Right to Whitby. Who the hell wants to COME to Whitby anyway? Bloody goths.

I told van Helsing the whole story, leaving out only the bit about the three vampire brides laughing at my manroot.

Must put an add in the paper. Shall move to Morecombe.

Hello, every vone. Move forvard, fill up the front seats first. I don't want any vone sitting out of range of my clue stick; I think I'm going to need it.

Mina has been bitten by a vampire. No, Quincy, she isn't a vampire herself; not yet. Put that down. You were about to do two things vrong: first, stake a non-Vampire. This is vrong. Second, staking any vone with a rolled up copy of Le Monde is just plain foolish. Alvays use Ze Daily Mail!

Quincy Morris does illustrate our central difficulty in our campaign against Dracula... namely, that you're all idiots. Except Mina, who is under partial mind control by Dracula. Yes, Mr. Holmwood? Good question. An idiot is someone with poor cognitive abilities or someone who acts in the manner of such a person. Yes, Mr. Harker? The answer to your question is no. You should have gone before the lecture started. Fucktard.

Stop sniggering at the back!

Obituary - Count Dracula Beloved war-hero, aristocrat and former cabinet minister Count Vlad Dracula, Hammer of the Turks and Hero of Wallachia was brutally murdered yesterday by a ruthless gang of accountants and lawyers from England.

In his youth, Count Dracula fought to keep his country free from encroachment by the Ottoman Empire. In more recent years, he was Minister for Transportation in the Ludoc cabinet, and was widely acclaimed for modernising Transylvania's transport infrastructure by building roads wide enough to accommodate four donkeys at once and in the shape of a pyramid too. He will be sorely missed (as in life, he was sorely kissed... arf arf).

The Count was stabbed in the eye, leg, left pinky, vermiform appendix, nasal septum and, finally, the heart with a bowie knife. Those responsible have since been taken into custody. Their leader, allegedly a Dutch scientist, has so far evaded the police by confusing them with hand signals. The Britishers will stand trial; their lawyer has already indicated that he will be pleading 'not guilty by virtue of fucktardity'.