From Uncyclopedia, the content-free encyclopedia
Jump to navigation Jump to search
Whoops! Maybe you were looking for Linux? 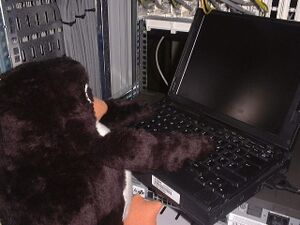 “I am Morgan Freeman, and I am talking about penguins in a deep bass voice.”

Penguins (also known as Pinguins or Paingwins) are a species of flightless black-and-white birds. To us, they are a cute but hostile and genocidal species out to eradicate all non avian life.

Penguins are an ancient alien race whose origins are mostly unknown, but it is speculated that they are extra-galactic. The Penguins have returned to the Milky way, as they have always done every fifty million years, to exterminate all non-avian lifeforms. Why the penguins do this will forever be a mystery as their goals and desires are unknowable. It is known that humans once had an interstellar empire spanning the Milky Way of its own at the peak of its power.

Times were good back then - kittens and puppies had yet to start their endless, savage war, and penny-sweets actually were a penny each. However, it was gradually realized that a sinister beaked force was infiltrating our very way of life, and attempted to steal the bomb. Then-emperor of mankind Jesus realized humanity was facing inevitable defeat when he awoke one day to find the dread lieutenant penguin Satan had slaughtered his entire counsel and scattered his fleets. Desperate, he fled to the fortress world Terra, and negotiated a peace treaty with the bears. However, Ursine reinforcements came too late - the inhabited worlds had been consumed by the plague.

Penguins are known to be ruthless in their attacks, especially against humans, puppies, and bears. They have already infiltrated the Antarctic and are actively planning their next move.

An artist's impression of an early penguin.

Indoctrination is the term used for the "brainwashing" effect the Penguins and their technology have on intelligent beings. A signal or energy field surrounds the penguin, which subtly influences the minds of any individual in range. It was first reported by colonists on the fringe worlds, who claimed there was a "horrible noise" emanating from penguin dropships as they descended. It is said that even the interior of said dropships contribute to this; the strange angles of the rooms are confusing and make you uncertain of yourself. The effect seems to extend to Penguin artifacts.

Indoctrination is one of the most insidious weapons the Penguins have in their arsenal; Human scientists describe it as a greater threat than reality TV. As history records show, indoctrinated slaves from conquered planets were used during the last Penguin incursion as sleeper agents. They were taken in by other Humans as refugees, then betrayed their own people to the avian menace. But the Penguins viewed them as disposable. When they moved on, the Penguins abandoned their indoctrinated slaves, leaving them to starve or die of exposure.

Penguins and Humans fought a war for the galaxy, and after a thousand years of war with quadrillions dead, the Human race was facing certain defeat. Unfortunately for us, the massive penguin invasion has only just begun. The penguins have infiltrated various important places including the White House, The Kremlin, NERV, The Great Wall of China, and various zoos across the world as well - they are also indoctrinating the human race in zoos as well. The primary fortresses are located at their home bases of Youngstown and their various colonies in Antarctica, which are used to help raise their numbers here on Earth.

The cuteness of penguins makes them perfect for advertising.

“We have no beginning. We have no end. We are infinite. Before us you are nothing. Millions of years after your kind has been eradicated and forgotten we will endure.”

~ Sovereign on the human race.

“Your words are as empty as your future.”

All penguins worship the master penguin, a living god known as Sovereign. It is unknwon when it was brought into existence. Sovereign created his evil race in his image with all of his hatred of life put in them. One especially hated human was Jesus. Sovereign would meet his match when he invaded the Milky Way. He saw humans as the only force that could stop him. Humans fought fiercely under the living god among humans known as Jesus, who stood in Sovereign's way of galactic genocide but unfortunately Jesus died in his final act to save mankind.

Towards the end of the Milky Way War. Sovereign's physical form was destroyed by The Divine Blast of Jesus. This was a tragic loss for the penguins, but it did not completely defeat them. Now he watches over them in his ethereal form, guiding the Empire of Antarctica. Many followers still say Sovereign is immortal, ruling in a hidden area, supposedly known as the dominion of Sovereign which is a twisted perversion of the earth.

Penguins and humans have fought in space, land, sea and air. They have become flightless nowadays because of man's recent tampering with a genetics bomb that destroyed the gene that made them fly. With humanity's space fleets wiped out in the Milky Way, all fighting is set in resistance pockets on the few remaining inhabitable worlds like Earth. Some say the human fleet was not lost but resides on the fringe of the galaxy awaiting the return of Jesus to return to Earth and cleanse the penguin population and rebuild.

A prophecy was told by the Church that Sovereign would return. In the year 3009, great battle will occur on Earth that will determine the fate of the galaxy. Jesus and Sovereign will do battle while the armies of humans and penguins will engage in their final battle. The battle will destroy much of the planet and blood will flow but humans will be victorious. As Jesus slays Sovereign and establishes terms with the help of Gene Simmons and Ace Frehley, they will begin to rebuild the human interstellar city and the seat of this new empire. Then He will give mankind his blessing to set forth and conquer the stars, to hunt down remaining penguins. Then the universe will fall under the iron fist of the Imperium of man.

Recently the true origins of Penguins have been discovered - a small star cluster that orbits the small Magellanic Cloud is home to the nefarious penguin empire. It is speculated that the penguins first scoured that small cluster of stars with their terrible indoctrination techniques and razor-sharp beaks, before turning a beady eye to the great Milky Way next door. Scientists even now prepare to chart a course there in an effort to stem the tide of evil.

Considered by some as the penguins of the North. Penguins envy them for their ability of flight and plan to kill them as well as humans.

One of the many secret penguin organizations working to enslave the earth.

A place where a famous homicidal penguin resides.

An unexplained part of the prophecy of what will happen to most of the penguin race after the chickens are wiped out. But you won't be eating there. You will be working there as a slave, making delicious fried penguin dishes for your leopard seal rulers.

Another cute and cuddly creature that will kill you.