“I totally would....wait Sigourney Weaver is a woman? Well she is very fit.”

Ellen Ripley or Sigourney Weaver (the names are interchangeable) is the only person known to have survived numerous xenomorph attacks. In fact, to this day only her word has been used to substantiate the existence of xenomorphs. She remains to this day a militant bug crushing feminist, even though she sometimes seems to lead a life of submission, such as in 2500 when Ellen seemingly disappeared from public life to live in the middle of a gorilla-infested forest, presumably to avoid xenomorphs. She is also the author of Ripley's Believe it or Not, a rambling, delusional autobiography written during her incarceration on that prison planet from the third one, space Alcatraz or whatever it was called. 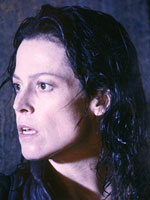 Ellen Ripley presumably has had numerous "early lives". Ellen claims to have been cloned and now part of her DNA is Xenomorph and the tabloids report she's dating the much younger Spyder-Man. The woman is a compulsive liar. Parasitic reproduction? Acid for blood? Penis-like head? That second ghostbusters? She is clearly out of her tiny little mind.

Numerous "credible" psychoanalysts such as Sigmund Freud and Isaac Newton have weighed in on the debate. They believe that the whole Xenomorph nonsense is a pathological projection of her violent sexual urges, an elaborate hoax used to personify the murderous impulses within her that has, so far, claimed the lives of hundreds of innocent insects, brought about the destruction of over 30 billion credits worth of Company and Military spacecraft and equipment, and resulted in an undisclosed number of very expensive cover-ups.

Ripley was held at Arkham Asylum for six weeks before being judged fit to reenter society as long as she promised not to kill any more people. Ellen moved back to New York, but her condition soon worsened and she began seeing ghosts and started thinking a Sumerian god lived in her refrigerator. Soon she was recommitted after an incident of public indecency in her underwear covered in molten marshmallows.

The strange case of the Sulaco[edit] 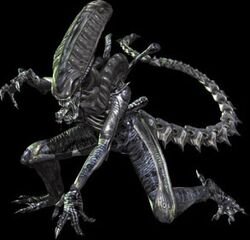 In 2347, the Space Marines, in order to boost recruitment began a campaign to enlist cadets from insane asylums. Ripley was conscripted and sent with her new squad to a routine Bug-Hunt on an outer Rim colony. What happened next is not entirely clear, but later investigation revealed that Private Ripley somehow crashed the Sulaco's shuttle, activated the colony reactor's self destruct, and depressurized the entire vessel through the cargo airlock before retiring to a well-earned cryogenic nap. The entire crew, consisting of a lean, tough marine squadron with everything to prove, the commanding officers, the pilots, the ship's android, and one civilian, was never found. They are presumed to have been vaporized by the colony's reactor breach incident.

The "Death" of Ellen Ripley[edit]

Sentenced to life without parole on a prison moon, Ellen turned to religion becoming muslim. This was short lived, however, as Ripley had a hard time facing Mecca to pray, and the killings soon started again. She had been prudently incarcerated in a facility with no self-destruct mechanism, as a precaution against her unique form of arson fetish. Sexually frustrated, Ripley decided instead to flood the place with molten lead and then dive off the deep end. And so at last Ripley had become another sci-fi metaphor for Jesus; sacrificing her own life to terminate the inhuman pregnancy within her rather than birth her demonic baby onto the earth. The Vatican immediately commissioned a sequel.

By this time, the military began to take interest in this strange woman's destructive potential. Every place she had been, every ship she had ever been on, was depopulated and blown up in a matter of days, sometimes hours. It was theorized that an army of Ripley's would be unstoppable, and could cripple an enemy's infrastructure and defences while simultaneously spreading demoralizing rumors about face-raping alien monsters among enemy troops.

So, after many fun failed attempts they successfully cloned her, with predictable results: the ship was destroyed and everyone on board was dead; the couple of seconds of CGI aliens were terrible; they had to remove the Newborns sagging tits penis and vagina; the director had no idea what the script was actually about until he watched it with french subtitles on DVD; Joss Whedon finally got a clone of the infamous technophobe Ripley to accept robot lesbianism, even though he signed up for a movie about a teenage Newt; and the franchise burned up in reentry with it's debris crashing into the antarctic on top of Kurt Russell.

According to one time director of Alien 5 Neill Blomkamp, Ripley currently sits in cryostasis next to the corpcicles of Newt and Hicks as everyone hates 3 and 4. The original Ripley died diving into a pool of lead so unless everyone wants to just pretend that didn't happen we're all stuck with the new Ripley no one really cares about, because she's a bio engineered weapon from some laboratory instead of an every woman. She bleeds acid cause she's part alien, which is kinda cool, but getting fans to care about clones of popular characters didn't really go so well for either Spyder-Man or Star Wars.

Mean whiles Ridley Scott takes the path of George Lucas and explores the Prometheus and Alien Covenant prequels and is fine with the ending to Alien 3, she's Jesus, what ever; James Cameron says give her a grave next to Sarah Connor.

After years of therapy to help her bury the lifetime of deep space atrocities she has witnessed behind a control console, a gun, and bars; Ellen is now the chipper host of her own daytime talk show. After all, they mostly come at night...mostly.

For those without comedic tastes, the so-called experts at Wikipedia have an article very remotely related to Ellen Ripley.
Retrieved from "https://uncyclopedia.com/w/index.php?title=Ellen_Ripley&oldid=6169579"
Categories: