Uncle Grandpa is an educational show on Cartoon Network aimed primarily at young school-aged children. It is the brainchild of Bill Nye the Science Guy, Piers Morgan and Simon Cowell, with the scripts of most episodes written by Neil deGrasse Tyson.

It is the spiritual successor to Bill Nye's first children's science show, and has been praised by parents and educators for making advanced topics such as logic, spatial reasoning, conservation of matter and energy, and multiple universes accessible to elementary and middle-school students.

Episodes often begin with a kid facing a science-related problem, at which point Uncle Grandpa appears with a cheerful "Good morning!" This greeting is aimed primarily at the audience, who is assumed to be a roomful of kids watching the episode on a VHS tape so the teacher can take a break. Uncle Grandpa's Research Vehicle (RV) usually pulls up soon afterwards, along with the rest of the supporting characters. Uncle Grandpa and his assistants then proceed to demonstrate important scientific principles to resolve the issue at hand, and the kids watching the tape are typically handed a quiz afterwards to test their knowledge gained.

The show includes some fun quips and home science experiments kids can do for enrichment exercises, but primarily takes a straightforward, serious approach some children consider unimaginative and dry. 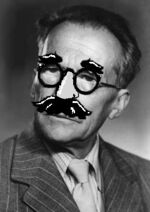 Uncle Grandpa, Ph.D, is the titular main character. He holds multiple doctorate's degrees in physics, philosophy and calculus, and strives to share his knowledge with children around the world (primarily in America, where they demonstrate how to pay for tuition using loans). His intelligence is so great, he built an offscreen device to bring in additional Uncle Grandpa clones from parallel universes, so they can assist in teaching. He is everyone's uncle and everyone's grandpa thanks to the wonders of genetic engineering, time travel and hillbillies.

Belly Bag is an important part of lab safety equipment that Uncle Grandpa carries his supplies for experiments in. In an attempt to make the show more interesting, Uncle Grandpa uses ventriloquism to make it seem like the bag is talking. The inside of the bag holds many different objects, demonstrating a practical application of bending the space-time continuum using elementary quantum physics.

Pizza Steve learns the horrifying details behind his creation.

Pizza Steve is another ventriloquism act put on by Uncle Grandpa, with a character in stark contrast to his own dusty professionalism. Even though Uncle Grandpa does all the talking for Pizza Steve, the slice of pizza is actually alive and moving on its own. The character was added to the show by Bill Nye to promote stem cell research and bioengineering principles.

Giant Realistic Flying Tiger is Uncle Grandpa's lovable animal mascot for his show. The tiger helps explain in plain English to viewers what is going on during experimental procedures. She can also fly using a form of biodiesel jet propulsion. She mostly promotes the science of aerodynamics to students interested in flight and the physics of fluids.

The process by which Giant Realistic Flying Tiger converts her jet fuel into thrust results in a rainbow of carcinogenic material being expelled from her anus at velocities exceeding Mach 2. These chemicals have caused concern and controversy amongst more conservative parents and educators, who fear the combination of so many colors close together in an orderly spectrum are a form of subliminal messaging promoting homosexuality, furthering scientists' Liberal Agenda for America. This was a contributing factor for the inclusion of Mr. Gus in later episodes.

Mr. Gus is Uncle Grandpa's bipedal brontosaurus, brought back to life using recent techniques in DNA manipulation which previously were predicted to develop by Jurassic Park. His role in the show is to provide comic relief, where his goofy antics, hyperactive demeanor and constant joking around are all that holds the attention of most children forced to watch the show.

The writers originally did not want to include Mr. Gus, as they felt he distracted too much from the educational topics at hand. However, pressure from creationists to have a science show give equal consideration to their scientific theories, including the important fact that dinosaurs coexisted with mankind 4000 years ago, led to the character's inclusion. Public reaction to Giant Realistic Flying Tiger's toxic flatulence trails also necessitated the creation of a new character to restore political balance to the series.

Tiny Miracle puts schoolchildren to sleep with yet another lecture on sorting algorithms.

Tiny Miracle is Uncle Grandpa's robotic assistant, utilized for experiments deemed too dangerous to be performed by humans. He promotes computer science, programming and robotics to young children. He is decidedly male despite being a machine, to attract the interest of adolescent schoolgirls. This is an attempt to try and fix the lack of aspiring females in the field. Tiny Miracle was not present in the first few episodes, but was later on added at the request of the majority of lonely male programmers at Google and Microsoft.

The show met near-universal acclaim from parents, teachers, and critics alike for its intelligence and carefully constructed plot. It won a pair of Emmy Awards for Best Educational Children's Show and Outstanding Storyline in Animation. Piers Morgan himself described the show as "a refreshing break from the utter nonsensical crap that Howie Mandel made me sit through on America's Got Talent."