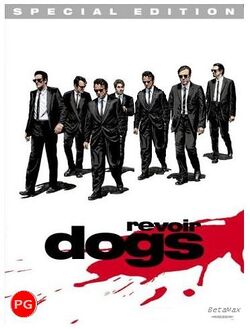 The poster for Reservoir Dogs. Tarantino is dyslexic, hecne the speelign mistake

~ Steve Buscemi on his role in Reservoir Dogs

“Because you're a faggot, alright?”

~ Lawrence Tierney on the reasoning behind Steve Buscemi's role

The Reservoir Dogs get to work.

For those without comedic tastes, the so-called experts at Wikipedia have an article about Reservoir Dogs.

The film opens in a diner, with these guys in suits talking about Madonna and playing Monopoly and some shit. Then they start talking about old 70s music. Then one of them takes some book off some other guy, and he gets real pissed off. Then that guy from Fargo says he doesn't tip, but eventually he does. Then they leave. (Not much of an opening, is it?) But then come the opening credits. This is the best bit of the film. Here we see the guys in suits walking along a street in time to Little Green Bag. (Doo-doo-doo-duh-doo-doo-duh-doo-duh-doo) It might not sound like much but they do it in - wait for it - slow motion. Now that's just badass. For real.

Right about now we hear some guy called Mr. Undercover Cop screaming that he's been shot, and Mr. Keitel tells him to shut the fuck up. Crybaby. See, they all have fake names so no-one knows who they are. I suppose the others never suspected Mr Undercover Cop could be, say ... a cop!? So anyway, Mr. Keitel drags him to the rendezvous point, and tries to comfort him. Then Mr. Undercover Cop asks Mr. Keitel to hold him. That bit's kinda gay. Then, Mr. Faggot shows up, and he tells the others that it might have been a set up.

So, it's pretty boring at this point, until Mr. Psycho shows up. He's played by Michael Madsen, which makes him super cool. So cool that he stops for fast food after the diamond heist. Now that's cool. Mr. Psycho pulls a cop out of the trunk of his car (cue the trunk shot Tarantino uses in every movie), and they all start to beat him up. But, just as it's getting interesting, it goes all weird, and we travel back in time to earlier in the film. I didn't get that bit. I mean, why didn't they just show that bit first? Or maybe they forgot about it, and had to put it in at the last minute. Whatever. Now, I fell asleep for a bit, and missed a coupla minutes, but when I woke up,

Mr. Psycho turned on the radio. Then just to prove what a badass he is, he tortures the cop ... for no reason. While dancing to Stealers' Wheel. That's how cool he is. Cuts his ear off and everything, even though we don't actually get to see it. Bummer. Just as Mr Psycho is about to burn him alive and give us more reasons never to listen to "Stuck in the Middle" the same way again, Mr Undercover Cop shoots him to death. Then we get a flashback containing his entire life story; how he became an actor, him rehearsing his lines, him getting hired as a cop, him meeting the Thing, etc.

He hasn't the slightest idea what you're talking about.

Mr Professional is the only one left. See that? The most unpopular guy there survived. He takes the diamonds and runs out of the warehouse. Mr Keitel crawls towards Mr Undercover Cop, who promptly tells him "Larry, I'm a cop". Mr Keitel is heartbroken, since he just killed two other guys just to prove this guy wasn't a cop. Mr Keitel plans to kill him, but police burst in and say "PUT THE GUN DOWN". Mr Keitel kills the policemen, takes Mr Undercover Cop to a hospital and they both reappear in Pulp Fiction, where Mr Undercover Cop robs a café.

So the film goes from "PUT THE FUCKING GUN DOWN! BAM BAM BAM" to "put da lime in da cocunut" just like that.

The film had a huge cultural impact. Oh yes. It did. At least on Monopoly players.

CONTINUITY ERROR: Tim Roth's character's shirt is absolutely soaked with blood in one scene. Yet in the next scene, it's totally clean. Then it's covered in blood again in the next scene. Can't believe they didn't spot that.

FACTUAL ERROR: Marvin Nash gets his ear cut off by Mr. Yellow. Now, THAT IS AN ERROR!

EQUIPMENT VISIBLE: Boom-mike visible in the scene where they're all swearing a lot and shooting each other's skulls off. It actually hits Mr Yellow on the head and kills him - totally changing the plot of the film.

EQUIPMENT VISIBLE: One of the camera crew can clearly been seen in the rear-view mirror of the car just before Tarantino snuffs it. He's holding a sign saying "Hello mum".

Joe Cabot: Here are your names - WP:Mr Happy, WP:Mr Brave, Mr. Clever, Mr. Cheerful, Mr. Jelly, Mr. Shut the Hell up before I beat the living Shit out of you with a stick, and Mr. Silly.

Joe Cabot: 'Cause you're a faggot, alright?

Joe Cabot: You're not Mr. Perfect, you're Mr. Silly.

The film's score was released as a soundtrack. As Mr Tarantino does not really understand what a soundtrack is supposed to be, it is merely a collection of random sounds from the film.

Note: not actually a song. Should not be counted as a soundtrack listing

Note: not actually a song either. Doesn't count

Again, not actually a song

No, this isn't a song either

Still not an actual song