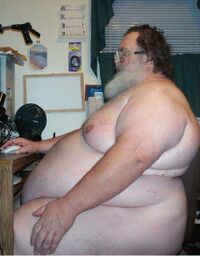 Tom, a typical contestent of the show, this picture is a before photo but also the after photo because tom gained weight during his attendance on the show

The Biggest Loser (also known as "Big Fat Losers," and "Big Fat Fucks") is a television show aired in America and Australia. The Biggest Loser show is a show where a bunch of fat emo jerks all gather up and get fatter and lose weight. In real life, losing weight is much easier, but the show duplicates the drama and emotion, making a hill seem like Mount Everest.

Usually there is a video diary done by the Fat Jerks, ranting and raving about how much they missed their fat sloppy joes and pizzas. At Every week, the Fat Jerks are weighed and the Host bags the shit out of them because their small weight loss.

The Fat Jerks are put in teams, and if the team has the lowest weight loss (most of the time becoming a draw), they have to be eliminated. This is totally rigged, because the stupid women on the show are "threaten" by the males who are just doing there own thing, and gang up on the strongest guy on the team. This Leads to betrayal and back stabbing.

At the end of each season, Only 3 Fat Jerks are left. They all compete for a $2,000 prize check, at the end, one Fat Jerk must win. By the time they've won, they look like super models but this is just all Photoshop, easily done with a Green Screen.

Usually the winner uses the money for Junk food and gets fat again, and tries to sign up for next season.

Usually the Contestants are all human and all have Diabetes. In Rare Cases, they let A Fat Pig in. The Pig was sadly Ambushed by the Other Contestents and was eaten the next morning.

Poppin Fresh also Appeared one season and was sadly beaten to death by a contestent who suffered from schizophrenia.

Super Mario also appeared in a season, but tragically was booted off because he smuggled Fat Food & Drugs shaped like Mushrooms into the biggest loser House.

Superman also appeared one season when he found out his father Jor-el was dead and just a stupid spam robot in a crystal, he got emotional and ate too much. Super Man suddenly Disappeared when he was to swim a 50 meter pool full of Oil, that was coincidentally filtered with Kryptonite. Some Say his body still lies at the bottom of the Pool, Some say they fished his deep fried body and fed it to the other contestants. Both Theories are most likely.

Zoidberg from futurama appeared one season, but he was booted out because he was not real and just an animation, even though they still accept aliens in the show.

Pac-man appeared in one season but suffered from a Compulsive Eating Disorder, due to the amount he eats in his games, Pac-man ate the other contestants, hosts and trainers. Pac-man was set free to roam the lands of Africa, and ate anything that came in its path. Some has said he found his way into the ocean and travelled to Japan and ate everyone. The Show Had to get new Contestents, hosts and trainers, and pretend to continue on with the same season, as like nothing had happened, but covered it by saying the contestants, trainers and hosts all had plastic surgery.

The Biggest Loser House is a Giant scary Mansion placed on a African National Park. The House had to be expanded because the Fat Jerks that go there were Fatter than the Show expected. The House has a giant pool of "soapy" water where all the fat jerks are sponge bathed.

The house also has a large trough where all the contestants eat from. The trough mainly contains of old food scraps, dead bodies, corpse's of any dead Contestants, Chip Bark, Cow Guts and other crap you wouldn't eat.

The House also has a giant gym and an Elimination room for the fat jerks to betray each other in.

The Trainers at the Biggest Loser house usually a Male and Female. The Male is usually a Homosexual Gorilla and the woman is usually a Transexual Prostitute from the streets.

They train the fat jerks in a giant mouse wheel where they generate electricity for the house. Usually the trainers have whips and usually beats the shit out of the fat jerks. Usually in the wheel, if a fat jerk falls down, they will be walked over.It is common for that contestent to die from a Heart attack, Sezius, Diabetes, Face Spasms, or even for being trampled on to much.

The Trainers are also equipped with a Tazer. The Trainers make the Fat Jerks swim a 50 meter swimming pool with burning oil in it.