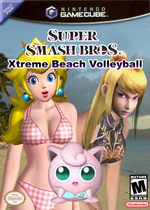 Cover Art for SSBX. It features Princess Peach (in the Cyclamen suit), Samus (in the Phoenix), and Jigglypuff (in the Lamina), three of the characters from the game.

Using his winnings from the SSBM tournament, Mr. Game & Watch heads off to Vegas for some gambling. He hits the jackpot playing slots and wins a rather large sum of money. Using this money, he procures himself an island and names it Mr. Game & Watch Island. He then sends out invitations stating that the next SSB tournament, SSBB, will be held on Mr. Game & Watch Island. As the competitors begin to arrive, however, they realize that he's tricked them. He only sent out the invitation to the female competitors, there is no tournament, and the girls are now stuck on the island for two weeks with nothing to do but play volleyball and shop.

Zelda prepares to serve the ball. At the top of the screen, character icons indicate the character's mood, which affects how well she will play. Also shown is the score and the percent damage each character (and the ball) has taken. The ball's damage is reset each point, while the character damage can only be cured by an item such as a Heart Container or a Maxim Tomato, or reset if the character is hit by the ball so hard that she flies off the screen. 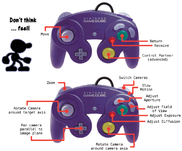 The object of volleyball is to knock the volleyball to the ground on your opponent's side. As the volleyball gets spiked back and forth, it takes damage. The more damage the ball has, the faster it will fly, and the harder it is to return. In addition, characters hit with the volleyball without blocking take damage, and if they go unhealed, will fall harder and take longer to get up. Randomly appearing items such as mushrooms and baseball bats may affect gameplay. Different characters damage the ball at different rates. The game is played first to 7 points by 2 or to 10, with money earnings based on score spread. In addition, nice points can be earned if your teammate likes you and you hurt the opposing team.

The true object of SSBX is to collect each of the 1243 bathing suits for each character. Each character has a unique set of bathing suits that they can purchase and give to the other characters as gifts. However, the skankiest and most expensive bathing suits also tend to be the most hated, and often will get tossed in the trash by the recipient. In order to prevent this, you must first butter up the character by giving her many many love items. If she likes you enough, then she can be tricked into wearing even the skimpiest and most embarrassing of bathing suits.

A young princess and heir to the Mushroom Kingdom and SSBTec (Super Smash Bros. Tournament Executive Committee, a front for an organization experimenting in Genetic Engineering with the goal of creating a perfect soldier), Princess Peach originally entered the SSB tournament to find out who killed her mother. She was originally disinterested in the politics of her father's company and wanted nothing to do with the tournament, but was left with no choice when Roy sent an assassin after her. Peach believes Bowser is the assassin, but in truth, Samus is.

Originally disguised as Princess Peach's maid, Samus is later revealed to be a bounty hunter originally hired by Roy to spy on Peach and eventually kill her. Although seemingly a strictly for-sale killer, Samus has her own reasons for getting involved with SSBTec; her parents were murdered by Ridley, an associate of Roy, when she was a young girl. She was then raised and trained as a bounty hunter by the Chozo.

Zelda in the "Venus" bathing suit. The Venus is the most expensive and whorey suit in the game.

Zelda is the Princess of Hyrule, but was once kidnapped by Ganondorf and SSBTec, where she was experimented on, brainwashed, and crippled. When she came to in Dream Land, suffering from amnesia, she was taken in by Kirby and Waddle Dee and trained in their dojo under the name Sheik. Link has abandoned his village to find Zelda, a course of action that makes him an outcast and earns him the scorn of Young Link. 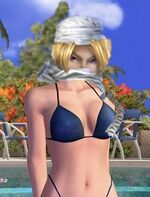 This proves, beyond a doubt, that Sheik IS a woman. And what a woman...

Nana wearing the bathing suit "Pixie", a one-piece suit cut down the middle to the stomach. She is accessorizing it with her favorite jacket and hat.

On his deathbed, Popo, Nana's lifelong ice-climbing partner, uttered the words "The girl I love is the strongest girl in the world." She entered the SSB tournament because she is insecure.

Jigglypuff, the spoiled only daughter of the famous Jigglypuff family and a famous opera singer, is considered a child prodigy in the martial art of Jigglypuff. She was once saved from a gang of street thugs by Pikachu. While grateful, she feels that she didn't need the protection and could have taken care of the thugs by herself. She entered the SSB tournament in order to beat Pikachu for her own pride.

Pit, while actually male, is mistaken for a female by Mr. Game & Watch. He seems to work for Mr. Game & Watch, showing the girls around the island as they arrive. (He did not appear in SSBM, and is first introduced in SSBX.) Little is known about Pit other than that he and Samus seem to be old buddies, and that he played volleyball in college. In SSBB, it is revealed that Pit is really the mysterious luchador Kid Icarus and a former research scientist under the employ of SSBTec who left when Roy tried to recruit him for his anti-King Toadstool faction.

In the opening movie of SSBX, Jigglypuff does some naked cliff-diving in the dark. These five seconds got the game its M for nudity rating.