For those without comedic tastes, the self-proclaimed experts at Wikipedia think they have an article about Hyrule.

The Land of Hyrule, third seat of Hylia, located in the Miyamoto region of the Indo-Nintendo Empire, is the main setting of the Legend of Zelda series, which is a set of dozens and dozens of video games wherein the hero Link must rescue the damsel in distress, Zelda, from evil forces, most of them pig-like. Many regions of Hyrule appear repeatedly over several games, such as Death Mountain, the Lost Woods, the Moblin's Head Pub & Grille, and the Creepy Haunted Island.

In the beginning there was nothing but a nebula where three goddesses, Din, Nayru and Farore hanged out and played Frisbee golf to pass the time. Eventually they got bored of that because it isn’t even a real sport and shouldn’t have even been invented, let alone played, so Din created a big ball of dirt and called it art. Din was very proud of her art project and thought it deserved an A so she showed it to her art teacher. Unfortunately Din had taken the coarse pass/fail, so she didn’t get that precious A, just a pass, and since an A is capitalized and a pass is not, that proves that an A is more important and totally awesomer then a simple boring pass.

So then Din went crying to Farore about how totally unfair this all was, and then Farore, to teach Din a lesson in humility, created a bunch of little critters to live on the ball of dirt. Then Farore declared “I rule!” and the little critters misheard it as “Hyrule,” so that’s what they named the ball of dirt they lived upon. Din was obviously angry about Farore covering her precious art project with annoying little creatures, for some of them, the Gorons, actually ate dirt. Then Din and Farore started slapping and pulling each other’s hair out, but then Nayru stepped in and created the Law to stop the fighting. Then the little creatures lived by themselves for a while and even created a few civilizations and war monuments on their own.

Then this cool dude whose name was, coincidentally, King of Hyrule, decided to become the king of Hyrule. To accomplish that he created an army. Unfortunately, they could only move in geometric patterns and could only see three yards in front of them and couldn’t stop a boy dressed up like a paranoid elf from sneaking into the castle garden, but they were the best he could find. Then the King took his self-fashioned army and conquered the fair city-states of the Zoras and the Gorons, and created for himself the Kingdom of Hyrule so he could rule it and feel good about himself. At first Din was happy about this, for it would be the end of the ferocious and brutal Gorons who threaten the very existence of her art project, but then the King decided to live in perpetual harmony with his newly-conquered people and Din was a tad furious about it all. Then, with the fate of her work of art in mind, Din decided to do something about the Goron problem. To elaborate on her scheme she paid a geometry professor from Kakariko University to design a cool triangular energy contraption to be used for her own mischievous designs. Thus the legendary golden trio of triangles was created: the Triforce!

Din then took this magical golden object and put it in this totally awesome place called the Temple of Time (lame name, but it does have a catchy background music plus a room that can change form a polygon shape to a square shape before your very eyes instantaneously), and that was all she needed to do. Then this totally rad dude named Ganondorf Dragmire ransacked the Temple of Time with a fleet of Airwings he borrowed from Starfox 64, in what is today called the Battle of the Five Armies. Four of the said armies were on the side of Ganondorf, hence his victory. 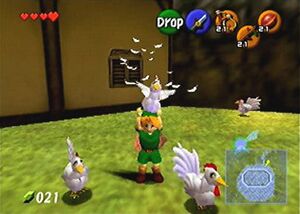 Who cares about history when you can play with chickens?

Then Ganondorf took the Triforce and used it to kill the King of Hyrule and established his omnipotent domain over the known world, which included giving out the order to his most trusted servant General Bongo Bongo, to feed the entire Goron race to a giant wyrm in a glorious act of genocide, and then retired to his evil fortress of darkness, which he positioned over a boiling lake of lava for added effect, to practice playing his beloved and most cherished pipe organ. Then the great goddess Din was satisfied, or at least so it would seem…

Then a racially and mentally confused Hylian who grew up with a bunch of Kokiri left home because he was bored earning his living by jumping off a bridge for quick cash and getting run over by a passing rock every time he tried to get the lame Kokiri Sword. This child, named Link, decided to overthrow the evil emperor Ganondorf and his evil empire and evil clothing lines for no good reason at all. After several repetitive episodes of crawling through dungeons, Link succeeded in defeating Ganondorf, right before the Goron genocide was officially completed, but only because said process fell behind schedule when Bongo Bongo accidentally cut of both of his own hands when making sushi and was hospitalized.

So the chubby lil’ Gorons survived, then Din overreacted with a big flood to wipe out the entire universe. Thus all of the Gorons were killed, along with everything else, and the only things left alive were a giant bird, an obese ghost, a lava crab, a mean green eating machine, and a giant sand worm, so Nintendo would have enough bosses to make the next game in which Lord Jabu-Jabu makes a cameo. 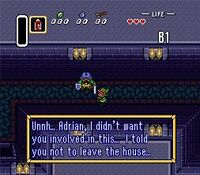 Link receives his uncle's sword, only to immediately discard it in search of a slightly better one.

In the totally awesome land of Hyrule, which is located just north of the not-so-awesome Somalia, there was a terrible blight called the Black Death which spread from nation to nation killing all who stood in its way, and the land of the Hylians was no exception. People were dying right and left, and a seemingly stand-up wizard named Agahnim offered to eradicate the disease from the land. So this wizard cured the dreaded plague, and the King said "Well, that's kinda cool, I guess" and made him his personal advisor. Much like any other advisor to a politician, Agahnim usurped the throne and began a rule of blood and fear, and also a change in color pallete.

Well, Link's old man, Uncle Hub, didn't care much for the New World Order this dark wizard was creating, so he snuck out in the middle of the night, leaving nothing for his beloved son except a rusty old lantern he bought at a Tripoli Tourist Shop from a Somalian on clearance, and marched off to make a one-man assault on Hyrule Castle. Contray to popular belief, a good guy can die in battle, and that's what happened to poor Uncle Hub. Now Link wasn't too happy about only getting a lantern, so he marched off himself to find the old buzzard, just in time too, and he forced his uncle to give him something besides a rusty old lantern. Uncle Hub then gave Link something he can actually know how to use, a sword, and then died. Only to be brought back from the dead just in time for the credits, suspicious...

Now Link decided to put his inheritance to good use, and snuck through a secret passage in the Eastern Gardens, leading his own attack on the keep. He was unable to stop Agahnim from banishing Princess Zelda to an alternate reality where soap sinks in water and hamburgers eat people, but Link did manage to travel to that reality as well and free a series of less attractive maidens using his many tools such as his lethal bug-catching net. Not content with settling on a homely lass, Link finished his quest by defeating the dark wizard Agahnim, who turned out to be Ganondorf again, and rescuing Zelda.

Hyrule’s economy is doing terrible, but in the past, at the height of the golden age, long before Ganondorf blew everything sky high and learned how to play the pipe organ, things were awesome. There were a ton of shops, shooting galleries, mini-games, Deku Scrubs that sold you worthless stuff, suspicious flying carpet salesmen, marketplaces and people’s problems to solve, but now all there is in the entirety of the latest adventure is some lame STAR game that has no point and a sweet looking café that refuses to sell you anything and the stupid Malo Mart with their "invincible" armor. Bottom line is that the king just SITS their. and right when people were getting downright bored of being bored (one townsfolk commented that Ganondorf was 150% better than the lazy old king, another townsfolk commented that the aforementioned townsfolk didn't know much about mathematics) The Burger King regime began. You can find out more about this regime if you click here: King Harkinian