Throughout the games, King Harkinian is portrayed as the obese, unintelligent, but lovable obese ruler of Hyrule. He is widely known for his catchphrases "Mah boi" and "Dinner", as well as his appearances in thousands of YouTube Poops.

For the religious among us who choose to believe lies, the so-called experts at Wikipedia have an article about King Harkinian.

King Harkinian is the rather jolly, yet gluttonous and incompetent sovereign leader of Hyrule. Renowned for his great obesity and simple mind, he is widely regarded as the most inspiring video game character ever. His hobbies include drinking wine, feasting on dinner,[1] pondering what's for dinner, forcing his enemies to scrub all the floors in Hyrule, and saying "Mah Boi." Despite his jolly and gluttonous demeanor, the King is noted for having some courage; unfortunately, having no magical powers or combat skills, and being a middle aged lard-arse, this only results in him being defeated or captured by his enemies.

Despite Ganon's repeated invasions, monsters roaming the lands, and massive inflation due to naturally occurring rubies, the King's autocratic rule is secure thanks to his loyal army and horrifyingly efficient secret police, headed by Link. In his kingdom, free speech has been curtailed, dissidents have been publicly hanged, and government-sponsored raids on political opponents have become part of everyday life. With his mind becoming more insane following every invasion by Ganon or assassination attempt, the only thing keeping the King's mind from snapping completely is his daughter and the thought of freshly cooked Octorok for dinner.

In 1989, Nintendo and Sony teamed up to create the "SNES CD" (or "Nintendo PlayStation"), an add-on to the SNES. However, before production could begin, Nintendo backstabbed Sony and instead teamed up with electronics company Philips to produce the add-on. After witnessing the failure of the Sega Micro CD, plans for the SNES CD were dropped altogether. As part of its alimony, Nintendo gave Philips the rights to characters from their The Legend of Zelda series, and signed an agreement that allowed Philips to give all control of game development, beta testing, marketing, coding, and writing to third-party developers. Nintendo's responsibility in this deal was to politely suggest how the characters should look.

When Philips asked Nintendo for input on the upcoming Zelda games, they threw their hands up, took a longer than advised drink of sake, and told them "Do whatever you want with Zelda, as long as we get some money." Buoyed by these magical words, Philips hired Animation Magic to develop two games (Link: The Faces of Evil and Zelda: The Wand of Gamelon) on a very small budget. Under the guidance of master programmer Dale DeSharone and veteran scriptwriter Jonathan Meritt, the King was born. Igor Razboff produced the games' famous cutscenes and helped create the King's iconic look.

The voice actor for the King was Colin Fox, a parking garage attendant in Animation Magic's studio. On the way back from work, the games' voice director chose him to voice the King. The King had a very limited role in both games, because Fox had some grocery shopping he had to do and thus was unwilling to commit his time to voice acting.

The eldest and portliest son of the mighty Burger King, Harkinian was born with a rare disease known as Bearded Baby Syndrome (BBS), and was often looked at with scorn. Instead of joyous cries of, "What an adorable baby!" the Burger King received remarks such as, "Could you shave your baby, please?" about his first born son. The Burger King attempted to give Harkinian a proper education, enrolling him in expensive private schools. However, the king benefited little from this, receiving very poor grades and spending his time drinking, partying, fornicating, and wondering what's for dinner. Despite his lack of ambition and intelligence, he did manage to graduate, most likely because of his father's "gifts" to the school.

As a child, Harkinian was quite effeminate, preferring to play with girls and do such girly actives as jumping rope, playing with barbie dolls, wearing dresses, going shopping, painting fingernails, and wondering what's for dinner. This obviously displeased the Burger King, who attempted to make his son more manly by exposing him to more masculine recreations and "beating the gay" out of him. This proved successful, and by his teenage years, Harkinian became a noted womanizer, having several mistresses.

At age 14, Harkinian became very dissatisfied with his appearance (his beard in particular). His self-esteem was lower than ever, and he was constantly harassed at school. Once he was old enough to get a job, he decided to save up money for plastic surgery. Working hard in his father's restaurant chain, Harkinian was finally able to afford beard-removal surgery at 16 years old. "He would've had it sooner," his first manager recalls, "if he wasn't eating all of the food instead of selling it!" The beard was gone for awhile, but started to grow back in the King's late 20s.[2]

The King's sister, co-leader of the rebellion against the Burger King

The last straw came when the Burger King instituted conscription for his restaurants, to deal with a labor shortage and keep wages down. Naturally, the time was ripe for Harkinian to lead a rebellion against his father. However, he was too busy feasting and fornicating to realize or care. Despite, or perhaps, because of his utter incompetence and complete indifference to the welfare of the kingdom, the rebel leaders offered Harkinian the crown if he supported the rebellion.

Initially, Harkinian was hesitant to rebel against his father. To incite him, the rebels introduced him to McDonald's, KFC, Wendy's, and other outlawed fast foods. The young prince quickly became addicted, and joined the rebels. After several years of civil war, the rebels proved successful, and the Burger King fled the country. His despotic laws were repealed, and new fast food restaurants appeared in every city, much to the new King's pleasure.

Link: The Faces of Evil[edit]

The King made his first video game appearance in Link: The Faces of Evil (1993). While the King was in his throne room drinking wine (as usual) and musing about the long-term ramifications of avant-Koridianism on post-colonial academic thought, Link made a rather strange comment about being "bored" with the peace in Hyrule following his countless beat downs of Hyrule's nemesis Ganon. The King in his infinite wisdom explained that peace is what all true warriors strive for. Since Link wasn't pleased with the boredom brought about by THIS piece of peace, that logically means he isn't a true warrior.

Link then wondered what Ganon was up to, since he had foolishly let Ganon live the last time. By unrealistic coincidence, Gwonam (or has he better known by his hundreds of fans, "Squadala Guy") arrived on his magic carpet (which is every Arab's choice of transportation) and let everyone know that Ganon was indeed up to something. In fact, that devilish pig had seized the island of Koridai! Link just grinned, as usual.

The King, who was particularly fond of Koridai's exotic dinners, with Link and a thousand-man army at his command, wondered if there was anything he could do to help. Gwonam looked at Link as if to ask, "Is he serious?" then said to the King, "You can help by defeating Ganon." The King clapped his hands. "What a brilliant idea! But first, let us feast!"

"No," said Gwoaman. "There is no time. It is written: Only Link can defeat Ganon." Link decided to grab his best items, including his Burnination Rod, Nukes, and Level-2 Sword, which would enable him to go straight to Ganon's castle without having to go through lots of tedious traveling and puzzle-solving in order to gather the necessary items elsewhere. But Gwonam said there was no time for him to run upstairs to his room, for Ganon would become ruler of everything in a matter of minutes. Thus, Link set off on his quest with nothing but his clothes and his sword to save Hyrule.

The King decided to stay at home and ponder such deep philosophical questions as "What's for dinner?" and "What makes a good dinner?" and "Is there an objective standard by which all dinners are judged?" Zelda was ordered to endure his thinking aloud for refusing to kiss Link, and she nearly lost her mind.

Zelda: The Wand of Gamelon[edit]

"Enough. Talk to the hand."

After Link single-handed defeated the army of Ganon, Harkinian received a desperate distress signal from his richer and much less obese cousin Duke Onkled, whose island of Gamelon was under attack by the evil forces of Ganon. Getting off his lazy ass for once, Harkinian decided to go to Gamelon to aid him. Zelda questioned his actions, but the King claimed he would take the Triforce of Courage Dinner to protect him and that his ship would sail in the morning. Impa also assured Zelda the fat oaf would return. Before the day of the big battle in which hundreds of lives would be slain, the King looked out the window at his small kingdom and wondered, "What's for dinner?" He spent the rest of the night stuffing his face with various foodstuffs, just like every other night.

And so, the King's shit ship sailed in the morning. Unfortunately, a month later Zelda was crying because there was no word of her father or his dinner buddies, even though Impa was certain he was alright. Link cheered her up, saying that the "old evil wizard monster who shoots lightning bolts from his hands is no match for a middle aged fat man." (This was complete bullshit, but everyone was too stupid to realize it.) Zelda then sent Link to find her father, but in a bizarre twist of fate, Link didn't return either. Sensing a plot device, Zelda grabbed a sword for the first time in her life and set out to defeat Ganon herself (HA!) even though it was written that only Link can defeat Ganon.

In the end, the King was rescued thanks to the efforts of his loyal subject Fari (the resident Mexican and Don Quixote impersonator). Somehow, Zelda learned that Duke Onkled had betrayed them, but Onkled was brought to justice. Onkled begged for mercy, but Harkinian said that he must scrub all the floors in Hyrule.

Oh, and Link apparently got himself stuck in a mirror, from which he was freed.

Recently, Philips has sued Burger King for copyright violation, as their mascot "the Burger King" is a blatant rip-off of King Harkinian.[3] 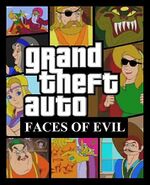 The King has also been involved in several video games