The Legend of Zelda

From Uncyclopedia, the content-free encyclopedia
(Redirected from Legend of Zelda)
Jump to navigation Jump to search 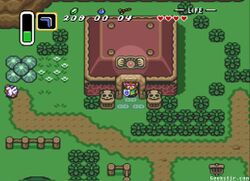 Nintendo is known to pay tribute to Goatse, especially in their Legend of Zelda series.

The Legend of Zelda, released in Japan as a name that ends in no Densetsu, is a series of videogames that are considered Nintendo’s strongest non-Mario-related work. These games seamlessly mix together elements of action, adventure, puzzle solving, and pottery destruction. The main story follows Link, a boy/man who leaves his comfortable home at 12/17 to save Hyrule/Zelda/The World from Ganondorf/Vaati/The Imprisoned/Ghirahim/Onox/Veran/Agahnim by collecting/rescuing three/four/six/eight gems/maidens/pieces of Triforce/shards of Triforce/shards of Mirror/Instruments/map pieces/sacred flames/Fused Shadows/Sages/Fairies/Giants (circle all that apply).

Fannious Boyous, a species of Geek common in the 80s theorized to have spawned from games such as this.

Link starts off the game jacking off, going into some cave where he is given a sword by some Old Man, and is presumably raped (this is why you don't accept gifts from strangers.) Tempted by the shittyness of the sword, and aided by the fact that he didn't take his pills, he goes on a retarded rampage, ass-raping every living thing in sight.

For those without comedic tastes, the so-called experts at Wikipedia have an article about The Legend of Zelda.

During the course of the game, Link locates eight mansions and slaughters the household's servants (with an assortment of bombs, ponies, arrows, and penis shaped swords) and eventually the owner of the household. He eats their hearts in a Satanic ritual to make himself stronger and then steals the poor dead monsters's triangle, after robbing their house of valuables of course. Along the way, he steals a variety of stuff from other people that helps him to go on his killing spree. He eventually finds his way into the pleasant household of Ganon, rapes his well paid servants, and proceeds to kill Ganon. Ganon's wife, the shemale Zelda, is forced to watch this happen. If this weren't enough, Link eventually has his way with him/her over a pool table. The end.

When The Legend of Zelda was released its gameplay defied categorization. The game begins with the player controlling a young delinquent named Link who finds himself in the magical world of Hyrule. Seeing a green cave, Link headed inside and received a wooden sword from some old guy. Feeling like a million bucks, Link sets out to destroy 9 different gangs on a miss-guided quest to "save" Princess Zelda from the clutches of the infamous pimp daddy Ganon. However, Link doesn't realize that he's really the bad guy and not Ganon.

The Legend of Zelda has multiple theories to which no one seems to have a proper answer. The best explanation so far is that there was a temporal explosion created by Link grabbing the Master Sword, ripping the space time continum into two where Link must save both worlds from an insane, maniacal evildoer named Ganon or Ganondorf. However one must ask why he (Ganon(dorf)) doesn't appear in every game? Well, the answer to this is that he does not have to appear for him to be involved. For example, why was the moon crashing into the town in Majora's Mask? Ganondorf. Anytime there is a problem in the Legend of Zelda the person behind it should ALWAYS be assumed to be Ganondorf, no matter how obscure it is.

The Legend of Zelda seems to have four constants, Link, Ganondorf, Zelda and Garthe Knight. Yes that's right, the characters have somehow traversed space and time. This leaves us to believe that Link may be behind who stole the the Doc's train and thus why Back to the Future 4 was never created. Ganondorf is a witch by common belief and witches can pass through time as they please. One puzzling aspect of all these games is why Link never ties the knot with Zelda. Like he only saves her in virtually every game. The only way to explain this is that Link is sexually inept and cannot produce children with Zelda, or that Zelda is too jealous of his previous affairs with Malon the prostitute, Saria (Link's childhood butt-buddy), and Ruto the creepy fish-lady princess.

Now how do we tell which game is in which timeline. Well this is easy, put every game in their own timeline. Yes, the beauty of alternate universes. Twilight Princess and Ocarina of Time, Multiple universes. Minish Cap, definitely hopefully its own universe. Super Smash Bros Brawl; yep, our own universe. Does anyone else notice that Ganondorf is one of the main baddies in that game as well? Then perhaps he can replace Bowser in the next Mario game?

Are you glad that you finally slayed Ganon? Guess what? The game rewards you for that. With round two!!!! After Ganon came back from hell, He realized what went wrong and made each of the gangs way more stronger. Fuck, you can't even walk into Level 1 without swords getting thrown at you...Unfortunately for the bad guys, Link trained Rocky style and then proceeded to go psycho on everyone's ass...The game ends Link fucking Zelda forever. 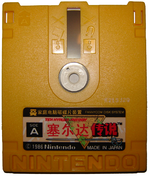 A cheezit cracker made from refined Nintendium.

Designer Shigeru Miyamoto was responsible for the development of Super Communist Bros. and decided to corrupt America's youth with yet another controversial character, this time in the form of a silent psychopathic, terrorist thief with a six-by-six pixel face incapable of any emotion or being identified.

With The Legend of Zelda, Miyamoto wanted to blur the lines between reality and illusion even further, giving players "a miniature garden that they can put inside their drawer."[1] A perfect example can be seen in 'the ocarina of time' where as opposed to reality, where a cow is milked by its utters, link obtains milk by playing a song for them. He drew his inspiration from his experiences as a boy around Alaska, where he explored nearby fields, woods, and caves, and through the Zelda titles he always tries to impart to players some of the sense of exploration and limitless wonder he felt. "When I was a pixel child," he said, "I went hiking through the pixellated country and found a bright blue lake made out of pixels. A pixellated fairy appeared out of it and circled me with pixellated red hearts, and I felt as if I had to let the players experience the sense of pixellated wonder I felt at this beautiful occurence."

In the initial game designs, the player would start the game with the sword already in their inventory. According to Miyamoto, those in Japan were confused and had trouble finding their way through the multiple path dungeons. Rather than listening to the complaints, Norris took away the sword out of spite, making the game even more difficult.

In the later game designs, after Shigeru Miyamoto stepped aside, the nintendo team would get high each day before working on the game. This resulted in Zelda "The Windwaker" where link has somehow turned from a tall manly master rapist into a small cat eyed freak who looks like he has been on the opposite side of some of those rapes. players must also shoot frogs made of gold with a bow and arrow in order to be taught a symbol that allows them to teleport via tornado, because thats what frogs do. After shooting the frogs and taking their symbols, Link must make them do a perverted dance so that Link can take pictures for later and then rapes them until they're dead. 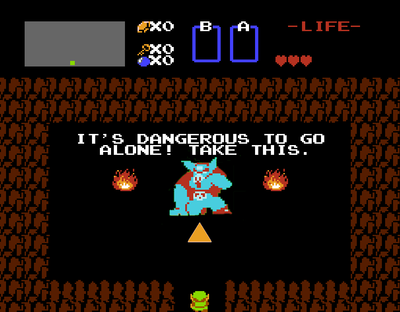 Oh, if only the games were as simple as this. Link is probably just having candy-coated dreams...

The Legend of Zelda's thief character, Link, warped the minds of players around the world on its initial run. It was reissued in 1990, in the hope that people would be too stupid to realise it was the same game. It was re-released for the Gayboy Advances for the same reasons, and you morons just lapped it up, didn't you?

The game places prominently on rigged popularity polls run by Zelda fans and spawned many cheap cash-in products such as toys, watches, trash, sequels, and the worst animated series in the existence of mankind. Even Michael Jackson, who was seriously turned on by Link and loved watching his show in the nude, abruptly stopped for fear of turning into a child molester.

In the future, Nintendo is planning to add Link into the real world through a time teleporter. Anyone living on Earth should lock their doors and get ready for a mini-apocalyspe of a live action Zelda.

Zelda has been re-released on multiple platforms, because Nintendo is a company that thinks you won't notice the difference and will keep paying for the same old junk over and over again. Judging from the way you lap these games up, they're right.