Yellow is a bright and cheery color. It is the color of the sun rising over a meadow still sparkling with morning dew as a choir of birds pleasantly chirps their greetings to the day. It is the color of a lovely sunflower glowing in the sunlight, or a cozy cottage in the country, or a butterfly flitting gaily from flower to flower. When mixed with blue, the color of a cool mountain stream, yellow helps to create green, the color of plants and nature in general, a symbol of all life on earth. Interior decorators use yellow furniture, paint, or wallpaper to make a room feel bright, cozy, and cheerful to all who enter. Scientists have actually linked the color to mental activity that corresponds with feelings of joy. In general, yellow is a jubilant color that invokes an emotional response ranging from contentment to delight. And it makes me fucking sick. 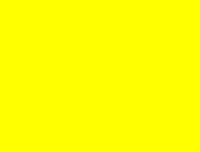 Things that are yellow 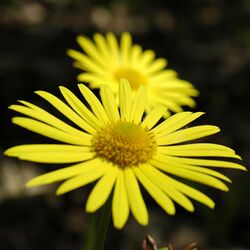 Lovely yellow flower, all perky and sanguine, right? Bet that's what yellow itself is like, right? WRONG.

Oh sure, everyone's heard of daffodils and daisies and tulips and tropical birds and sports cars, but they're not the only things that are yellow, you know. Let's look at some of the others, shall we?

I bet this sounds like the most chipper, lighthearted disease you'll ever die from, huh? WRONG. You know what this thing's other names are? I bet you don't, because I didn't either, until I looked them up. Black Vomit is just one of them. How does that sound? A whole lot worse, I bet! And let's look at the 'fever' part, too. I bet you think this is like Saturday Night Fever, where you'll just dance and dance until you internal-hemorrhage yourself to death. ALSO WRONG. There's no leading role played by John Travolta in this disease, no defining background music by the Bee Gees. Instead, there's fever, chills, bleeding into the skin, rapid heartbeat, headache, back pains, extreme prostration, nausea, vomiting, constipation, and some kind of weird deal that turns your skin yellow. I bet now you're all like "oh, but I'll be all peppy and effervescent now that I'm yellow, right?" FOR THE THIRD TIME, WRONG. You won't be peppy or effervescent. You will be feverish, chilled, internally bloody, rapidly heartbeating, headached, back-pained, extremely prostrated, nauseous, vomity, and constipated.

Bees are a terrible excuse for an insect. Oh sure, they flit merrily around and make their delicious honey, and it's all very lovely listening to their drowsy buzzing on an afternoon stroll through a flower garden, but you know what else bees do? They sting. And it hurts. What's worse, bees communicate by dancing. If that's not fucking gay, I don't even know what is. I mean, really. Dancing? How do you talk that way? Waltz for yes, tango for no, and electric boogaloo if you need more time to decide? That's just fucking stupid.

When it's a miserable, dreary day outside, there's always one item that acts as miserable, over-sweetened icing on the miserable, dried-out cake: A yellow raincoat. Now, I have nothing against yellow raincoats. Well, actually, yes I do. Otherwise I'd have no reason to include them in this list. You see, a yellow raincoat once assaulted my father. It was a rainy Sunday afternoon, and dad was just putting his raincoat in the hall closet when the coat decided that it was a good day to attempt murder. Apparently the whole thing was actually the result of a misunderstanding--my father had remarked "thank goodness for this raincoat, or I would be rather moist right now," which the coat heard as "raincoats are gay." Anyways, my mother had to pull the enraged raincoat off of my father, completely emasculating him. Soon he lost his job, and then our house. Allow me to reiterate that, for the sake of emphasis: A raincoat made me homeless. But not just any raincoat. A yellow raincoat.

Bananas are the almighty source of the life substance known as POTASSIUM. POTASSIUM is needed for all daily functions. An apple a day keeps the doctor away. A banana a day will increase your POTASSIUM intake tenfold! People often associate humor with the banana and they don't know why. This is it: a long time ago, Arthur Fonzzerelli picked up a banana and held it in the sky and said, this fruit shall be above all other fruits. That's it. It isn't that exciting of a story. Plus it kind of looks like a penis. Allow me to say why I dislike them: TOO MUCH POTASSIUM!!!

Other "fun" facts about the color yellow

If you didn't pick up on it, the title of this section is completely sarcastic, and the following facts about yellow will actually not be any fun at all. Prepare to not have fun.

What yellow did to my girlfriend's cousin

My girlfriend is related to a guy that was mugged by the color yellow. Yellow fractured one of his ribs and took his wallet, and almost ran right over him when he drove away, laughing, on his motorcycle. What's worse, yellow never even got caught. When my girlfriend's cousin went to the cops to tell them what yellow did, they were all too busy thinking about the lonesome, melancholy warbling of the Yellow-breasted Chat to do anything about it. Yellow has them all totally snowed. Probably bribes them, too. That rich, sneaky bastard.

What yellow did to my cousin's girlfriend

No, seriously. I know it sounds crazy; when I say that, everyone usually says something like "what?" or "that doesn't even make sense" or "ugh, dude, you smell like stale beer and vodka, lay off the hooch" or "who are you and what are you doing outside my window at 3 in the morning? I'm calling the police." But it's true.

It had all started two weeks before in a club in Boston, where my cousin and his girl were dancing and having a good old-fashioned, innocent, fun, non-yellow time. Well, guess who shows up. The goldenrod dickweed himself. Yellow. In all fairness, it's not like he was there trying to rape someone. He was just out clubbing. Yellow was chatting with my cousin at the bar, when my cousin mentioned how nice the weather had been lately. Unfortunately, the music was remarkably loud, and yellow confused the innocent comment about the weather with a decidedly less innocent, and more sarcastic, comment. Specifically, this one: "Oooh, look at me, I'm yellow and I'm a gigantic faggot, please rape my face."

Needless to say, this did not go over well. Instead of talking things out with my cousin like a human being(which would have probably resulted in the whole misunderstanding being cleared up), yellow decided that it would be better to just take cruel revenge on my kinsman. After thinking about several plans, yellow decided that the best one was revenge rape. So he held my cousin and his girlfriend at gunpoint and made him watch while he raped her.

You know how when something really really great happens and you feel awesome for the rest of the day? This was the opposite of that. He and his girlfriend broke up two months later: every time she had sex with him she felt yellow inside her, and every time he had sex with her, he saw yellow raping her when he closed his eyes.

He's a pervert, too

Ok, here's a story that will fucking creep your shit out, ok?

I'm asleep, in my bed for a change. Passed out on the floor had started feeling played out, and I required variety. I'm in my bed, asleep, facing my window. I wake up in the middle of the night and see movement through my shades. Huh, I think, probably just wind blowing trees or something. You know how crazy the trees go when wind blows them. Wind probably gives the best tree-head ever. I wonder what it'd be like getting dome from the wind... And so my thoughts wandered like the mind of a child, some kind of freaky nympho-maniacal child, and I drifted from wakefulness to slumber. OR SO I THOUGHT. See, maybe forty-five minutes later, I woke up again.

But yellow was just all like, "Hey, brah, chill! Chill out, brah! Bro, you need to chill, dude. Man, brosef, chill. Dude, I just wanted to bum a cigarette, broski."

And then yellow got all offended, in an effort to somehow transfer blame of this whole thing onto me. I was gonna beat him up, but then I thought better of it. And then I did it anyways. Stupid fucker.

All in all, yellow has a pretty positive reputation. A lot of people seem to like a lot of the projects in which yellow has been involved. However, anyone who likes yellow is wrong. I have proven this indisputable fact in the above essay. Yellow is neither cheerful nor jaunty, vivacious nor ebullient; yellow is a liar that maintains an image clean enough for Disney for PR purposes, and secretly rapes people in its spare time. In conclusion, chartreuse is, like, way cooler.