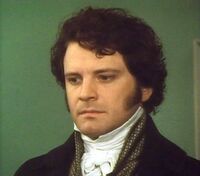 Darcy looks more pleased with himself than present company, I, the writer of this article, presume!

“This article is tolerable I suppose, but not interesting enough to tempt me.”

~ Mr. Darcy on Pride and Prejudice

“Bitches love me on account of my fat stacks.”

~ Fitzwilliam Darcy on Himself

Pride and Prejudice by G.I. Jane Austen is a book based on a mini-series based on a TV show based on the Off-Broadway version of the smash hit mime drama, "Where's My Top-Hat and Cane?" It was published in an edition of 7 ox-leather-bound chapbooks on October First, 1611, at midnight. Due to its immense critical acclaim and wild popularity, it was reprinted yearly until 2204, at which point the already prevalent tradition of simply injecting it ocularly into the fetuses of the unborn was universally adopted.

It is currently the number 1 cause of teen suicides among teenagers in the English-speaking world. 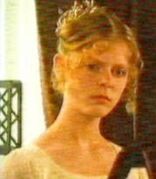 "How the hell should I know? Perhaps you left it at Mr. Collin's house. You two seem to be quite... comfortable together, mm?"

Because it was originally shot as a mime drama, Pride and Prejudice had a very silent tone about it. Mister Darcy, played by Marcel Marceaux, was the first Victorian-era character to wear face paints in a stage production. In addition, when recreating the drama for Off-Broadway, TV, and the ensuing mini-series, the score composers had a very difficult time piecing together the almost non-existent soundtrack. During its first performance, the performers themselves had to hum the music.

This show, like many others, debuted in London, and subsequently in New York City – once the producers and directors figured out how to get the mime actors past Customs. The New York Production featured a stage with multiple lifts and elevators and a kick line of idyllic, pastoral sheep. Also it was the first show in over 50 years to have a social register with its program, printing names, titles, seat numbers, yearly income, and estate property holdings of each audience member for every show. However, the show failed once on Broadway, due to lack of comments given to the press by the performers.

The TV show, "Where's My Top-Hat and Cane: The Next Generation" tried to wow its audience with crazy special effects. No, seriously, they were like HOLY SH**!! The mini-series, was only marginally crazier than the TV show. Filmed in Russia, and produced by George Lucas, the mini-series had proved the WMTHaC series' best and most profitable effort yet. It ended up making around an estimated $245 Million in its opening month.

The movie version stars the skinny chick from those pirate movies. Nobody gets naked in it :-(

Pffft. Austen's cheap attempt to rip-off the beloved WMTHaC series, with a cheap pile of literary devices and characters and plot.

The sequel, "Pride and Prejudice II: The Revenge of Catherine de Burgh" was written by Austen's budgie in 1615. However, the abduction of Mr. Darcy by zombies proved unpopular with the critics and every single copy of the book was subsequently burned and tossed into the ocean.

The Prequel was written in 2034, by G.I. Jane's nephew, a forty year old virgin named Mr. Collins who was appauled by the representation of himself in the book in question. Determined to clear his good name, he wrote the prequel, "Mr. Collins: Neither a Virgin, Nor a Preacher." This novel was full of brash claims and exaggerations about the life of pleasure Mr. Collins supposedly lived. The book, however, was never published, as no publishing companies wanted to be associated with such a baffon.

Another Prequel.. Prime and Prejudice, was written by someone who once read the book, and impecable taste in film.. Prime and Prejudice was a TV remake staring "Optimus Prime" as Mr Darcy, also Chuck Norris played Elizabeth, and Wesley Snipes played all the sisters, definable only by different facial hair he grew for each part.. The film was never actually released to the general public as it was so awesome that anyone who watched it went blind (the result of Chuck Norris in a dress) but the tapes are still somewhere in one of optimus's many "tape slots" for any brave enough to try and view them.

Charles Dickens sued Austen over the book in the Bleak Courthouse in London for copyright infringement in 1858, but m'lud Judge Dredd of the Queen's Bench dismissed the case with prejudice. The judge was heard to say he took no pride in doing so.