“I haven't read this article yet and I doubt I ever will, because I'm damn sure that it's going to be crap anyway.” 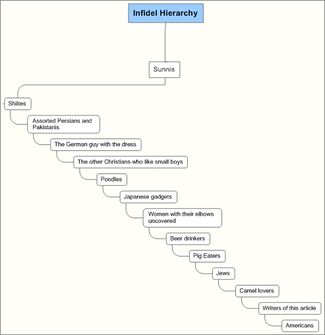 An example of a well researched power-point Prejudice Chart

Prejudice is a means used for ranking humans. If you are considering meeting or purchasing a human it is worth noting suitable prejudices so you can find the best human for you. Popular forms of prejudice are: All types of "bigotry" (such as by class), racism, sexism, religious intolerance and being nasty to the disabled.

There are three races: black people, white people and the in-betweens (see Hispanics and Indians for more info.). The only major difference between any races is that ‘white men can’t jump’ as depicted in the 1992 film (the year of the good ol' days known as the L.A. riots). Due to the white man’s inability to jump the white race is now on the brink of extinction. The majority of white men have died out after getting stuck in shallow holes or falling down narrow chasms. Ironically, mexicans can jump higher than anyone else. Asians, Arabs, Eastern europeans, and kinky fetish Germans (what german isn't kinky? huh huh) currently control the porn industry. They have overcome quite a lot to prove that they are good at fucking.

Only recently racism was considered uncool, unacceptable, immoral, even illegal, wrong or evil. Back in the 1950's, it was perfectly alright in America for white people to give black people their space (i.e. separate "Colored" entrances) and to refer them as "Negroes" (nicer than the N word). Also back in the 50s, white people didn't consider Jews as "white", Asians as "Cauc-Asian", Puerto Ricans as "Americans" and Native Americans were here first (with souls). Plus in Canada the Frenchies in Quebec had to use English to get by without the official "bilingualism" (French only in the province) nonsense, the British still thought the Irish and Pakis were throwbacks to the time when primates ruled the earth, and Australians openly hated Italians as well hunted Aborigines like wildlife. It comes to show everyone is a lil' bit racist.

There are two types of gender (although puppets are attempting to extend the classification.). These are known as ‘Man’ and ‘wo-Man’. There are significant disadvantages to getting either of these genders so be careful.

‘Wo-men’ cannot get things down from high shelves, this is the simpler ‘Man’s main advantage. With the invention of the stepladder some scientists have accused the male of going the way of the whiteys.

The male’s most significant disadvantage is its one-track mind. It is often said that men are only after one thing and obviously this is true, they can’t multi-task. This means that in any sort of debate with a wo-man the man will lose, as shown in the following example:

Fe-male: Why is the gate open?

Male: Nothing to do with me, I shut it, perhaps the latch is broken?

F: Then why haven’t you fixed it?

F: Well perhaps you would have if you stopped staring at other girls asses all the time!

Notice how the male’s logic is easily defeated as he can only concentrate on the thing he’s talking about.

While men conventionally lose in one-on-one debates, men are generally better at mass-debating, a skill that many wo-Men will force upon the Man as a result of aforementioned conflict because the Wo-man is a frigid, arrogant bitch who thinks she's always right about everything and will make a Man suffer for her imperfections. The above has been widely proven by extensive scientific research into the gender, most of which was carried out by experts in the field, fat, bloated, beer-soaked college students who were watching a late show, belching loudly and indulging in booze, potato chips and ice cream tubs in lieu of completing vital assignments due in the next day. The ground breaking findings were presented to the student council posing as a board of directors on a scrap receipt from a dime store off-license late the next day, hours past the deadline.

Men still think they got balls to make them "bad", although women know how to "naturally" deal with Men-struation, Men-opause and Men-tal breakdowns. Women are very skilled in being pregnant for 9 months, physically give birth and can nurse through her boobs.

And least not forget homophobia towards gay, lesbian, bisexual and transsexual people. It's so...queer of you to do that.

You may want to be careful when selecting a human for any purpose if the human has too much to little or even the right amount of religion. It is dangerous in all forms (including where it isn’t). The following religions are particularly common.

Many people suffer from disabilities that hold them back during life. These people have been removed from society so that they don’t do damage to others. Once in every few years (the exact number is not known) these people are let out to re-enact the Olympics. The sickening twist is that each competitor is chosen so that they have a specific disability stopping them from taking part. For instance people without legs may be chosen to run marathons. The court of human rights has outlawed this practice.

Despite the general one-sided prejudice in society against ‘disablos’ (a.k.a. tards, spazs or aspies) some have gone on to have quite successful lives, for instance Stephen Hawking who has both several disabilities including being a wheelchair man has had his voice machine featuring as a guest on The Simpsons. Another famed retard/cripple/handicap is "TIMMY!" on South Park. TIMMY.

Some people consider being old, poor or just plain stupid a disability but the government is yet to find a suitable method of dealing with this issue.

What about fat people? autism? and the AIDS? Oh yeah, everyone is all focused on the deaf, blind and crippled to give a shit on them.

And remember, they aren't disabled they are HANDICAPables. Don't call them retards either, just refer them as "special". :-D

The main social strata in nearly every country in the world (plus the USA), it's to be born "rich", "poor" or in the "middle" class. Rich people are always afraid of those poor welfare-check receiving bums to make their taxes go way up, same goes to the middle class who shun the poor's unwillingness to find a job and go to work, and may I mention the middle class hates the rich and poor equally? A majority of poor people are just unlucky not to be born with cash inherited from their ancestors, or they became poor after they lose a job, mostly from outsourcing. Time to eat the rich! and tasty in the middle too. The rich would say "nah we taste bad, eat them instead". In class-less Soviet Russia, the "people" run you.

If you have already narrowed your choice of human down by traditional prejudice you may need to used some refined form of prejudice to find the best buy. The following are types of human you should try and avoid.