This article was written about a peckerhead.

The author knows this because he is also a peckerhead and has frequently chatted with David Duke at the meetings. 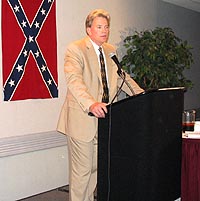 For those without comedic tastes, the so-called experts at Wikipedia think they have an article about David Duke.

“He is a tough albino nigga!!”

Lord General Sir David Ernest Duke, 1st Duke of the Confederate States of America (born July 1, 1950), otherwise known as Duke Light, is a fugly American politician, racist and founder of the Knights of the Ku Klux Klan. Duke was born in Louisiana and early in his life, he started a movement against all things black. His most recent crusade involves hunting panthers, black cats, and crows as well as conducting rap cd burnings and hunting down black rappers.

He does however have a soft side and is currently building an amusement park in Mississippi for white people called 666 Flags (all confederate) and will feature such attractions as a haunted house full of men in white sheets and hoods, bumper squad cars, and a carousel made of German Shepherds and Pitt Bulls. No chicken, watermelon, or grape kool-aid will be served and only confederate money will be allowed.

Duke eventually became Grand Dragon of the Ku Klux Klan, slaying the previous dragon and becoming the first Grand Dragon to have all of his original teeth. [1] The Ant-defamation league described Duke in this period as "fiery". After an accident involving his dragon fire-breath and peasants, Duke decided the more appealing career was in politics. David Duke was knighted by King Arthur after joining the Republican Party. During his run for election to the round table, every Republican who felt like getting on television denounced him. Duke was elected to the General Assembly in Louisiana for some reason. Duke got in trouble for selling frisbees with Swastikas on them. Around this time, Duke decided to be "born again" so he could run for higher office. He climbed inside what he thought was the womb of his girlfriend (it was actually her colon), and she spent 3 hours giving birth to a grown man/turd.

Unfortunately for Duke, the voters of Camelot, Louisiana found him way too creepy to be Governor of their state. Duke lost 61% to 39% to corrupt politician Edwin Edwards. After Duke's defeat, he randomly ran for more offices, and then faded off of the face of the Earth. it is believed that he later became David Icke.

Nobody knows where Duke lives exactly, only that he's secretly working as a special advisor to Dick Cheney, and that his one remaining ambition is to break a chair over Geraldo Rivera's head.

Duke has had a successful musical career. He first came to prominence with the self-penned yuletide classic I'm Dreaming Of A White Christmas. He later collaborated with Michael Jackson on the 1982 hit Ebony And Ivory. In the video for this he controversially appeared in blackface make-up so that it would contain at least one non-white singer.