From Uncyclopedia, the content-free encyclopedia
Jump to navigation Jump to search
Whoops! Maybe you were looking for Uncyclopedia?

Sexism is the widespread and common belief that the main, or possibly sole, use of the opposite sex is, well, sex. While controversial amongst the opposite sex, the theory is strongly supported by the fact that women are inferior to men in a lot of stuff, except, most notably, causing an erection of the heterosexual male.

God created the Man, Adam, and the Woman, Eve, in His image, and they were equal before Him, and He saw that this was good. As well as this, all television channels were unprejudiced, and used no stereotypes. 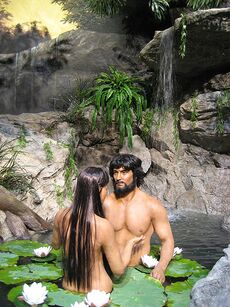 Sexism first started when Adam was walking through the Garden of Eden and in him grew a great hunger. So he called out for Eve and stated his need for something to eat in his "Urgent voice" expecting the proper and subservient reply but instead he received something different, something that we now call "Sass". Eve responded by making some lame excuse that she was "Busy" and suggested that maybe Adam (a man) could maybe "Get it for himself."

However, chances were that in that very moment, Eve came across a snake which showed her the tree bearing apples, of which she gave to Adam to shut him up. This angered God who had just only been able to succeed in having the tree bear Pink Lady apples which is notably difficult in the desert and He was thus quite protective of the apples. So God threw humanity out of the Garden of Eden and damned women to the pain of child birth.

Adam found that indeed he could - and should have - solved the problem himself. Adam asked Eve: "What use do thou serve, woman?" To shut him up, Eve showed him a jolly good time. Thus, the idea of sexism came into existence. Coincidentally, this is also the history of the origins of make-up sex.

By the beginning of historic times, alternative - or rather additional - uses had been found for the women most notably cleaning, cooking and child-care (the so-called holy trinity). These tasks are still performed by women. However, this does not pose a problem for the idea of sexism: 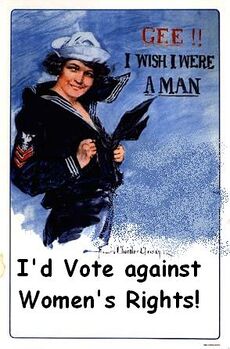 During the Industrial Revolution, the ingenuity of men made more tasks much less physically demanding and thus open to women, however, these jobs were always performed slower and thus to compete with more efficient men, women were offered significantly lower wages. These jobs are no longer performed by anyone.

The ingenuity of men also made significant advances in medicine, raising the average life expectancy and thus made secondary positions in nursing the sick and the elderly open to women. Also, the advent of public bureaucracy made administrative positions which require neither physical nor mental capabilities available to women.

The womens' rights movement defeated their opposition in the 90s and made men their slaves. All public displays of Sexism got banished to a parallel dimension where only one gender exists. However, secretly the idea of sexism lives on, in particular in password-protected internet chatrooms, anonymous message boards, Islamic-run countries, and non-sensical, open source, free-to-edit encyclopedias.