Cloud floating by, on a peaceful summer day.

Cloud Strife is the name of the hero who turned out not to be a hero but in the end was a hero of Final Fantasy VII. Cloud is distinguishable from afar by his sometimes blocky appearance and unique hairstyle. He's also the spokesman of a group founded to raise awareness of "Compensation through Hair". The group enjoys mild success. He currently lives in retirement at an undisclosed location, tending to his chocobo farm.

While Cloud may act like he's a real badass, he actually isn't. He thought he was though, but then he started to realise that he was actually insane. So, he isn't badass, but he's pretty insane. This explains many things about him: The fact he is oblivious to love of any kind (Even if you told him, you'd probably get a blank stare.) and he also seems to hate anything with long, silver hair, and HUGE, THIN swords, that take the mark from over compensating to extremely over compensating. It is rumored that his mental state played a big factor in his retirement late 2006 to his Chocobo farm, which is about the only thing he'll ever admit to loving even though he is oblivious to it. Sometimes he may even show a smile, but that's just because he has an extreme fetish of Necrophilia and is imagining you as the body of his dead friends- when you get a smile you pretty much should just run.

Cloud's overall appearance is considered his special way of telling everyone that he isn't someone you'd want to approach. Then again, nobody really likes approaching emos anyway. Cloud is usually seen as the guy who made it popular to have blood all over your face in public. While this is was originally considered socially unacceptable, Cloud is considered socially insane, so he can do whatever he wants, even if it means the world will be hit by a meteor- its just "Not My Problem".

In Canada, Cloud joined a elite group known as S.O.L.D.I.E.R, where he met Zack Fair. During this time, the two took a peaceful vacation to Nazi Germany, however things turned bad for Cloud and Zack. They ran short on money, and started having some fights. Eventually, Cloud would discover that Zack had been in an affair with a man named Sephiroth. This led to quite the confrontation, as Cloud buried Zack in a cave for a while, came back a bit later, found him dead, bloodied him a bit more, then was told he will have to live for the both of them. A perilous task that Cloud would actually accomplish somewhat, before going after Sephiroth 10 years later.

When he finally took the train between Nazi Germany and Japan, his memories became somewhat confused, and he took on the persona of Zack. Cloud hoped to go to Japan so that he could start a new life as a Terrorist. It is in Japan that he met Osama, who taught Cloud how to bomb the sections of Japan in a way that would lead him never being captured. The rest sort of gets a bit boring, so we'll skip to the middle. One of Cloud's terrorist helpers, Aerith, was killed by Sephiroth, reigniting the long forgotten rivalry. Instead of using a phoenix down (magic thing)on Aerith, he instead attempted to drown her, in what would be followed by the biggest investigation in history, the Aerith Gainsborough Murder Trial.

After Cloud helped kill Aerith, he went through angst. Eventually, he'd defeat Sephiroth, stop the big-ass meteor Sephiroth was going to use on earth, but he'd still never get to diddle Tifa.

While in post hero syndrome, Cloud started a delivery service. The service would deliver packages across the borders of Japan and Nazi Germany, while also being undetectable by S.O.L.D.I.E.R. This Delivery company helped Cloud build his retirement fund, and would also pay for the massive amounts of hair gel he used daily. Cloud also invested in buying a Motorbike, and a pair of sunglasses to wear while driving it, because apparently in Japan, you don't need to wear helmets-only sunglasses. Cloud's delivery service came under attack from many protesters when it was discovered that Cloud had delivered a large quantity of Children to a group known only as "Remnants". This accusation would be the end of Cloud's delivery service. Luckily by then, he had made enough deliveries to fund his Chocobo farm, which would serve as a valuable source of income throughout his retirement.

When Cloud was touring earth with his motorbike, he suddenly ran out of gas. Lost somewhere upon thousands and thousands of regional farmland, he waited for 2 years living off the food of thousands of wild Chocobos, when he was suddenly discovered by a farmer. Cloud traded his motorbike for a can of gas, before setting off on his way. Around 2 months later, when he had realised how stupid he was in the fact that he didn't bring any Chocobo meat with him, he started to feel depressed. Hauling the gas tank with him didn't make any sense anymore. Just as he was about to give in and collapse, he came across one little chocobo. From there, he started an empire of chocobos. Then he found out he could've just bought a home with all the money he had, but it was still very fulfilling. Upon his prized collection of chocobos include the flat chocobo, Which Cloud takes great pride in owning. Cloud's farm, appropriately titled "Cloud's Chocobos" is actually little known. However it makes up a major part of supplying KFC, and this business deal helps keep Cloud's Chocobos OFF the map, because the Chocobos are the only thing Cloud will actually ever love. 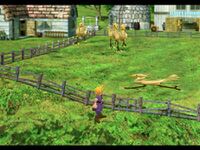 Also, he doesn't want to come in contact with any S.O.L.D.I.E.R members yet.

Made in China, this huge plastic sword is half the reason Cloud's known for. The other half being his hair. Anyway, not surprisingly, both his hair and sword are larger than his body. While it took Cloud a while to learn how to hold the huge sword, and then how to actually use it, and then how to use it safely when in the presence of vital organs, he did eventually get around to using it. The one time he used it was when he had to spread some butter on his bread, but couldn't find the knife. Naturally,as one does, they go through ridiculously huge amounts of training that spans 10 years and a dead friend to finally be able to enjoy the buttered bread. It tasted like victory according to Cloud's biography. The butter knife/sword was passed down to him from the aforementioned Zack Fair. Cloud later replaced it with a higher, more advanced, unknown named sword. It was possibly named Fuck This Shit Up since he was so fucking good at it. 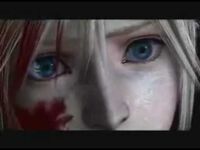 While Cloud's ability to put anything behind him (not really. he just can't get over tifa) is astonishing, he seems to "reach his limit" and go crazy at someone whenever the word "Mako Junkie", "Wheelchair", or "Plot Device" is used. It was a unique event in Cloud's life that forced him to become a paralysed mako zombie, confined to his wheelchair. While the mako did do some good, such as giving him super powers that he later lost (his short term memory loss also made it difficult to determine the difference between an assassination target and his fellow troops in S.O.L.D.I.E.R) it's generally considered by himself to be the "darkest time of my life...". While this would make sense, seeing as he was in a coma, he was deemed mentally unstable for the remainder of his coma. When he came out of it, he was just deemed mentally retarded.