Gnomes are the basic creatures for your economy.

“Age of Empires is about building empires.”

~ Captain Obvious in his cameo in the William Wallace Campaign

~ An AOE player on AOE's AI

Age of Mythology is one of the best mythical real-time strategy computer games. Its goal is to kill the enemy, creating first a powerful economy with a lot of gnomes (or workers) gathering resources for your god. Then He-Man gives you fabulous creatures. Your god is an important thing in Age of Mythology.

This is about the firsty game in the Age of series. Gameplay hasn't changed since then.

The game begins with all you need to start getting fun: three gnomes or more, a gnome center, a magician (also called priest), a superhero (known as a paladin) and a catapult. Then you will have a great time until the bling-bling runs out, as it is the most important resource and the one that your god likes most.

For those without comedic tastes, the self-proclaimed experts at Wikipedia think they have an article about Age of Empires.

How to win the game[edit] 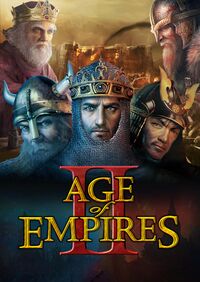 The most common way to win the game is by killing all enemy's creatures. However, it will be sometimes a hard task because once you have shown the superiority of your army, the enemy starts to play "fags"; that is, scatter his creatures all over the map and you would have to seek them. Some of them may attack your cities and this is a bad situation.

You can also win the game by getting your god happy, which can be done in three ways:

If your god is particularly depressed, you have no hope. Except that's a lie, because there are still ways to win:

The real winners, however, are the people who alt+F4 and find a better game to play.

Yes, the game is so awesome that it has an infinite number of "most important units of the game" (The awesomeness mainly comes from the inclusion of Dwight D. Eisenhower).

This is the last age in every age of empires game. In this age your Dwight D. Eisenhower units get an extreme power-up that makes them possible to roundhouse kick 4 enemy buildings at the same time. The only way to beat the enemy once he's in the OWN age is get into the POWN age. This age is only accesable by buying it on e-bay. While in the POWN age your Dwight D. Eisenhower units can not only round house kick 4 enemy buildings, it also enables them to make a nice cup of tea. This makes sure you don't get completely dehydrated while being addicted to age of empires, so you still have a 10% chance to live when you finally kill your enemy.

The game features a number of campaigns based on the wars of famous historical characters:

William Wallace: The noob campaign which teaches you how to be a wild man in Scotland. The story is related to Braveheart, according to Bruce Shelly.

Joan of Arc: A French maid dusts the boots of the English, gets a midget onto the French throne, and rides her horse into Hitler's burning stake. Don't let the British rape Joan.

Saladin: Drive out the Americans from Iraq, and scream Allah-Allah in front of them.

Genghis Khan: Making the worst parody videos possible and then getting banned after alleged Copyright infringement.

Barbarossa: Barbarossa runs forth and back across Europe searching for his boyfriend Henry IV, only to find out that Henry was cheating on him. Twice.

El Cid An anti-Islamic nobleman wants to kill all the rapists in Iraq. Not recommended for Muslims.

Attila the Hun Attila must defeat his big brother, Bleda, then slay all the Roman soldiers!!!!!

Some other, unimportant scenarios are all clumped into a giant Map of the World, including the Modernization of Japan under Nobunaga, the flight of the British who lost to the French at Agincourt, the Turks raiding the Byzantines and the building of a big ass tower close to the sea.