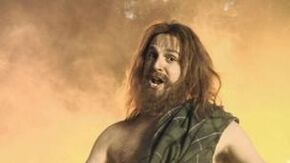 William Wallace delivers a monologue to the audience.

In a time of oppression, fear, and haggis, the great strategist Sun Tzu sought, in a little known conflict, to force Scottish men to wear pants. Having recently invented war, the great Tzu realized that he could use this new technique to force the Scottish to adhere to his will. It was in these times that a legend was born...

Sir William Wallace was a mighty Scotsman who fought against the English invasion of his land in the late 1200s by King Edward I. The invasion started when King Edward I had conquered Wales, and decided to go for Scotland, completely failing to realise that Hadrian's Wall is just a sign that the Romans failed to do so many years earlier, and they were twice as badarse as him. Wallace fought a fierce campaign against the English using tactics such as guerilla warfare, long hair, heavy metal and pure distaste for the upper class. Sadly, despite his awesome head banging skills, Wallace lost and was executed in the early 1300s.

For those without comedic tastes, the so-called experts at Wikipedia have an article about William Wallace.

The invasion started when King Edward was done with slaughtering innocent Welsh children, as part of a new sport invented by the English for upper class folk. Of course, King Longshanks was upset because all the other nobles kept beating his score. Ever the sore loser, King Edward successfully conquered Wales, just so he could have all the Welsh children for himself so that the nobles couldn't win. The nobles were annoyed by the king's reaction to losing, so they went to pick on Scotland. An Englishman called Shelby decided to bully the Wallace family, and what better way to bully a family than to kill someone's wife. Wallace was upset at such a distasteful deed, but came to his senses and realised that he towered above the Englishman and was twice as strong. So, Wallace killed him.

An English sheriff arrived at the scene, because the country were convinced that they could police other nations. Wallace killed the sheriff too, officially starting a huge sense of anarchy. Wallace got out his trusty record player (which were new back then) and blared heavy metal over the forests of Scotland. Soon enough, the rest of the country joined in on Wallace's awesome riot.

Unable to defeat the English militarily, Wallace set out to offend their sensibilities and became his generation's equivalent of the emo.

William Wallace decided to go out for some hot dogs, for he was feeling a "wee bit peckish". Upon he and his army buying their food, they each sat down at the other side of Sterling Bridge to eat. A large crowd of English tourists appeared on the other side of the bridge, but needed help crossing. Wallace mistook them for the English army, and set out to get them. On closer inspection, he realised they were tourists. He was extremely apologetic for nearly killing them, and they accepted his apology, becoming friends quickly. Upon realising these tourists were inspired to go to Scotland because of Braveheart, Wallace instantly destroyed the bridge. Bridge collapsed, hundreds drowned. His army slaughtered the rest of the tourists. Wallace insisted from that day on he'd beaten the English army; old king Ed believed him, and wanted a retaliation as soon as possible.

The fall of Scotland[edit]

At 19, William Wallace had been reduced to beating rivers with sticks to earn money to fuel his ever growing addiction to kitten huffing. It was at this time that Tzu, on an expedition to sail around the world, stumbled upon the quaint land of Scotland. Finding the land King-less, witless and surprisingly free of trousers, Tzu met with the Holy Bagpipes Guild to assert his position as the King of Scotland. Not realizing Tzu's true motives, the Holy Bagpipes Guild informed Tzu that only a man who could survive sexual intercourse with the Lady of the Lake while being stoned by three conjoined twin midgets could be the king of Scotland. However, as this explanation was complete and utter bullshit, Tzu simply decided that war would be the better option for all parties involved. Having perfected war, Tzu soon had all of Scotland within his grasp. All of the Scots donned cotton pants(trousers), and for a time there was sorrow. William also enjoyed poking kittens.

The Battle of Gay Rights[edit]

Some tacky piece of tourist shit. The fence is there to protect the statue from its popularity amongst local Scots who clearly love a historical figure rendered as a mad Australian racist.

One day William Wallace was pursuing his daily activities of beating water with a stick, when the Tzu's grand army began to make their way over a nearby bridge known to all as Tim Burton Island Bridge. William approached the army to ask for a handful of margarine. Historians to this day still do not know who fired the first shot, but what is certain is that 15 helicopters, 30 armored ground vehicles, 500 shock troops, and one mecha descended upon Wallace. However, with the aid of three gruff billy goats, William carried the day.

The exploits of William Wallace spread like plenty of butter over a medium sized piece of toast. Soon, Scots from far and wide threw off the pants of their oppression and basked in the freedom they so craved. Battles came and went, but no matter how craftily the great strategist Sunshine Biscuit Tzu restrained the flailing freedoms of the Scots, Wallace was ever present to expose the Scots once more to the new liberty.

Wallace then managed to do something that would give him a place forever in Scottish history. He united the Scots as a nation (granted using Buckfast, Mars Bars, and Heroin). His "policies" held no bounds and politicians nowadays still use the "Wallace Tactic" of telling the nation exactly what they wanna hear. Promises of ginger people having a valid place in society and not just accepted for their comic value. Free use of a cow, twice a week, to any man with an exceptionally ugly wife. The policy that clinched it for Wallace was undoubtedly half price kebabs on a Saturday night after 11pm.

The Scots fought their way south, leaving behind them a path of terror. Raping women (and also men but they asked to have that piece written out the history books), raping livestock, raping trees and large bushes. There was also reports of occasional pillaging but this has also been denied. As they marched they acquainted themselves with the local produce and unfortunately things might have been a bit different nowadays if the Scots hadn't been distracted by Cheddar Cheese, Melton Mowbray Pork Pies and bangers and mash. Not far from Liverpool they slowly began to collapse, one by one, until the mighty army numbered just twenty, hundreds left behind in the fields, sleeping and farting the day away.

End of a Man, Beginning of a Legend[edit]

About 3/4 of the way through his campaign, William came down with a massive case of the bends while scuba diving off the coast of the Isle of Man. He died swiftly in his mud hut. However, by this time, Tzu's grip on Scotland had all but withered. At last, driven from Scotland, Tzu returned to the Orient and went on to write several novels replete with what he had learned during the Pants Wars, compiling them all into one large volume. Wallace was finally laid to rest at the end of a rainbow (this later evolved into the Irish legend of leprechauns). To this day, some say that he still rises from his grave to kill drunk teenagers (this later evolved into a series of urban legends). However, it is in his native land where he is most fondly remembered as, "The fellow who pulled off the pants of our ancestors and made men of them simply by pulling off their pants off their bums and the like.