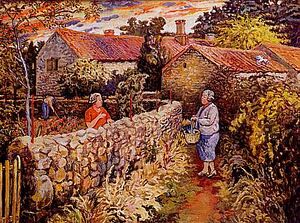 In this artist's impression of Hadrian's Wall, you can make out the opposing forces fighting over a section of it. The army on the right are dressed in blue, as the Picts of the time would daub themselves blue before committing to battle as a means of scaring the enemy.

Hadrian's Wall, built by the SNP from 122 AD onwards rests on the border between England and Scotland. It was part of a building programme that should have seen the construction of Hadrian's Kitchen, Hadrian's Jacuzzi and Hadrian's Split-level but the money ran out.

Roman Emperor Hadrian is said to have asked it to be constructed as no one could draw accurate maps at the time. He was also worried about the Scots encroaching on the Roman Empire in the same way neighbours will move the garden fence when you're not looking. The wall was originally thirty feet tall and covered in ice to keep out the "UnDead" (otherwise known as Glasgow Rangers supporters). It shrank over time as people helped themselves to build rockeries and sheds. Compared to the Great Wall of China, Hadrian's looks like it was erected for midgets but it is still very nice since it's not as crowded, though business has gone up since the Berlin Wall was taken down for spoiling the view.

Modern historians have a number of alternative (read: wrong) theories about the origins of Hadrian's Wall. Some say it was named after guitarist Hadrian Belew, actor Hadrian Zmed, or the very popular (insert other person's name named Adrian, but with the name misspelled "Hadrian," here). Now the consensus (as celebrated with some strong malt whisky) is that Hadrian was responsible but it is unlikely he personally mixed the cement and stuck the bricks down on the wet mortar.

Other sources suggest that King Norman, who had conquested England in 1066, hired a handy-man named Hadrian to build it in order to keep out the Loch Ness monster, and the hairy Scots, who are perceived to have sought to mate with dirty, smelly wives of Frenchmen. 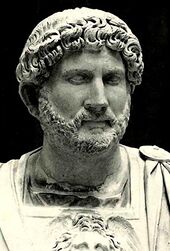 I had planning permission. I agreed with myself that a wall was needed.

One common theory is that the wall was erected to protect the English from Scottish football fans rampaging over the border, but many a Roman Centurion has cast doubt on this claiming that they wanted England to "look tidy". Since the English were still over in Germany at this time, this explanation has been booted away like an empty can of triple strength lager.

Chinese historians say Hadrian's Wall was just an inconsequential annex to their impressive bit of brick work or was constructed in the wrong place by ignorant contractors from Ireland. The lesson learned: Don't let an Irish man build your wall, because it might end up six thousand miles away from where it was intended to be.

Others suggest that Hadrian's Wall was really built to keep out leprechauns and banshees who on average are shorter than Verne Troyer. This theory says Hadrian's Wall was never very high. It did keep out the Little Folk but was facing the wrong way when the big beery English invaded in 500 AD. 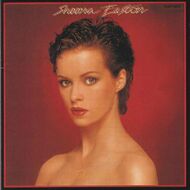 She sang about Sugar Walls.

Hadrian's Wall later inspired the East Germans to build their own version in Berlin in 1961. Other walls of note are Wall Street (to keep people from stealing the money) and Hitler's Atlantic Wall to keep the Allies out of Europe. US Confederate general Stonewall Jackson had a passion for walls made of human flesh. Others like Roman emperor Antoninus Pius had one made from turf and turds but that soon fell apart because of the weather. There is also an ice wall in Game of Thrones, and Scottish-born singer Sheena Easton sang about "Sugar Walls". There is also a brand of ice cream called Walls in the UK because you can use their product as an emergency defence if nothing else is handy. (Very effective in Scotland where the temperature remains very low all year round.)

The latest "wall builder" was former President Donald Trump, who wanted a southern barrier against both Mexicans and Pink Floyd fans. He got the brainstorm of making Mexico itself fund the wall. Emperor Hadrian probably wished he had thought of that first.

For those without comedic tastes, the self-proclaimed experts at Wikipedia have an article about Hadrian's Wall.