Norwich is a city in Norfolk, with one mediocre view of the now defunct Bernard Matthews turkey factory. During the 11th century Norwich was allegedly the 2nd biggest city in England after London, but this fact was disputed after census tampering was revealed due to the poor literacy rate of the inhabitants (a statistic that has not improved greatly in modern times). Norwich is also well-known for being the only part of East Anglia where not everyone is related to one another. 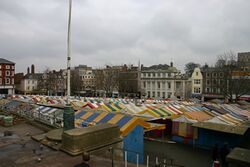 Where Norwich does much of its "sharpen"

Norwich's centre of "loocal" power is Anglia Square (pron: Angla Swear), a beautiful multi-storey mock-Georgian estate building in the "shyte bit" in the North of the city, overlooking the now-empty Matthews Turkey fields. Built in 1770 it features a recently added pleasant 1960's facade, complete with "artwork". During the 2nd Norfolk-Suffolk war, the enemy extensively bombed the city, but sadly missed this bit out, despite the whole population lighting signal fires, shouting and waving flags to attract their attention. The area is also famous for being the home of HMSO or HOMS as it was known in the old days. It made books and stuff and that to export to the clever people who lived far away in the South and North and West.

Norwich is well know for having a culture based on a strong family, this has been easy for local government to maintain as there is only two of them. Any other people who live in the city are regarded as "furriners" and are subjected to harsh abuse and the occasional house torching.

Norwich has the enviable accolade of having the greatest number of Police CCTV cameras per head of population in the UK, easily beating London, Manchester and former terrorist hotspots in Northern Ireland. One crazy local inhabitant has even plotted every camera on a Google map which you can see here:

The City is twinned with Rouen, Koblenz, El Viejo and Novi Sad.

Journeys to Norwich can be enjoyed along the East Anglian Superhighway which loooocals feel typifies the embracing spirit of forward thinking and boundless enthusiasm for change with which the city has become so synonymous. Starting in London, the M11 (pron. Emma Lairvun) tempts you with an 18 lane mega-freeway which is adapted at the So-fuck/No-fuck border to a single unmetalled cart track with a stop/go scarecrow at the town of Evilden. All other roads to the city are along dank and misty tow-paths.

The same love of change applies with the road from the north of the country, that's correct there is only one road that connects the entire north of England to Norwich and the rest of East Anglia, the illustrious A17! It's not completley shit honest... What with the inspiring scenery of complete and utterly soul destroying, grey, flat, fenland on one side, but also the borderline rapist luddites that live along the road, often seen sitting by the side of it, watching the cars drive past according to them the car "wor' boy mean of witchcraft."

Also the fact that it is a one lane dirt track and you can't go ten yards without getting stuck behind a Tractor or a Lorry. It is a frightening journey as you really want to go faster because if you have to stop the looocals will take you, and your hubcaps. They like the shineys.

The popular Rouen Daily Press newspaper is published fortnightly to warn the locals of full moons, new roads and immigrants, as well as providing the timetables for Cadmium air spraying.

South-west of the city, Norwich has its own Locust cars company which fulfills the local transport needs with a fine blend of extruded window frames and glass-fibre bodied three wheelers.

Norwich has two shopping malls, both of which are inhabited by strange, demonic, creatures with large wings and afros. The Castle Mall, perhaps the most demon-possessed of the two, is built into a hill and named after Roy Castle, who is famed for breaking many records, his most famous being playing the trumpet whilst tap dancing to Bohemian Rhapsody. The second of the Norwich malls is Chapelfield. Named after the world famous Circus family, it is the last resting place of Adolf Hitler.

After the bombing of Dresden in 1945, Norwich became the city in Europe with the most pre-reformation cathedrals.

In 1986 the "Grand Moff" of Norwich, Stewart White (stuwrt whuite) decided to build a brand new Death Star on the site of the war memorial, hense why it is still patheticly out of use today. The death star was a complete failiure by the Imperical Norwich City Council due to a complete lack of interest and the locals. They kept turning up protesting at the top of the market chanting "Oie wan' somware to sit duwn an ea' moi chips!"

The highlight and cultural centre of the city is the charming Heartsease estate, its concrete towers providing a refreshing contrast with all that historic and well-built stuff. Heartsease is home to the Alsation Appreciation Society and Tracksuit Shop, and it is said that to live there your IQ must be at most 3.

The Norwich dialect is proudly among the most impenetrable in the UK. This is entirely due to the loocal mistrust of outsiders or 'Faarners' as they're known locally - the dialect has been carefully honed over many centuries in order to make precisely no sense whatsoever to anyone not born within a day's tractor drive of the city centre.

When you are in Norfolk it is customary and polite to chew with your mouth open, and spit bits of food on the person(s) oposite you. In Norwich the noise level of conversation ranges from shout to yell. Culturaly this is due to generations of the people of Norwich and Norfolk working with farm machinery wurring in the background, as it still does today.

A few language tips . The usual greeting in norfolk follows;

"Ha y' alruigh boi?" Translation: How are you?

"Oy new tha' it snew cus I jus driv there." Translation: I know that it has snowed because I have just driven from there.

"Hewld yew har' boi!" Translation: Wow, slow down a minute or give me a chance.

However, Ipswich Town Football Club (nicknamed "The Binners", for how they pride themselves in collecting rubbish left by the occasional tourist that visits once or twice every half a century) former chairman David Sheepsh*gger, recently stated that after being attacked and hounded out by vicious locals on tractors shouting "stab up that wasteman, he ain't nuffin blud" that he would much rather be director at their fierce rivals Norwich, despite having a football team consisting of 11 standing pegs, and that is nowadays only attended by 25,000 loyal clapping Penguins on matchdays.

However in doing this he would have to contest this position with the aptly acclaimed "Neil Doomcaster" for his works in making Norwich City the well known pub football team it is today, in a piece of agricultrual trivia, in keeping with the current owners criteria for new staff members who only "know about what Norwich City is about", u no wht i meen?

It's said that only on this basis did ex-manager Boy George lookalike Bryan Gunn get the job, despite relegating Norwich to it's lowest position in the football league in half a century, and harbouring ambitions of making the club a competitive side in the "East Anglian Combination" division, where they can finally contest a 'proper' East Anglian derby with Lowestoft Town.

The ground originated as a Nest made up of loose twigs and bark chippings. Since then it has grown into one of the funniest stadia in the European Union. Sitting alongside Morrison's and the Narridge to Yaarmuth dyke, Carra Ruud has undergone many changes. The most recent has been the renovation of the thatch on the roof of the Barclay stand - using Naarfuk reed (from Hum Base, Aisle 17 (Made in China)). Opposite is a branch of the Narridge & Pete-a-brugh Building Society - which is quite handy.

Locals turn up to watch a tragically underachieving team break their hearts every other Saturday and then go home. The pitch though is regarded as one of the finest in England, due to the volume of shit that it gets on it every week. There are no parking facilities around the ground as none of the locals are allowed to drive but those who do anyway can't fit their tractors in a space.

Carra Ruud is twinned with Portaloo Ro-ad, in Ipswich, previously home to many Eastern European ladies. At weekends whole flocks of football fans are not found there, but in the local liquid nightclub, stabbing each other with pitchforks.

Though the fine city of Norwich is not blessed with many of those forms of entertainment popular in most 21st century conurbations, residents are constantly amused by the local eccentrics, known in the area as fengibbons or, more commonly, super-heroes.