“He had a fine pair of buttocks. You could bounce a nickel off them four times, at the very least.”
~ Oscar Wilde on Bertrand Russell

“I was on a bike ride with one of the many wives I have had throughout the years, and about half way through I realised I didn't love her anymore. This may be because she told me she'd been sleeping with Oscar Wilde. I thought that was my privilege alone” 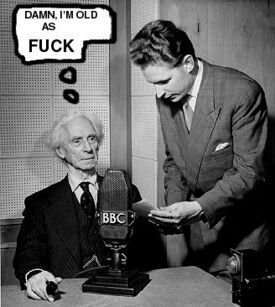 Bertrand Russell, being prepped for one of his many appearances on Mastermind.

Bertrand "Teapot" Russell (523 B.C. to 2007 A.D.) was a Greek detective, famous for his smart use of logicism in solving unsolved mysteries. He was also the representative for Sunsilk shampoo from 1835 until his death.

Russell was born an orphan to aristocratic parents, Mary of Magdalen and a Devonshire milkman who didn't have a name. Russell would later describe the first few months of his childhood as "idyllic". After this point his father had a major nervous breakdowns, which involved force feeding his infant son nine and a half pints of UHT milk a night. As a result Russell later in life developed nutrigrain breakfast bars as an alternative to dairy products.

By the time he was in his teens, it was apparent that Russell was a genius. He is known to have spent long evenings masturbating and developing the basis of logic, which he later went on to teach his pupil, Wittgenstein. Russell had also developed by this time a strong aversion to organised religion, he is said to have realised there was no God while praying one night. He suddenly realised he was talking to himself. This worried his family greatly, especially his mother, Mary, who in a desperate attempt to save her son's soul, used to place one of his hands in warm water and one in cold while he slept. Naturally Russell would urinate in the night, but this only served to enforce his conviction that there was no God.

Russell was interested in perpetual arguments as a means of semantic rehydration, a practice she coined as a triumviratic union of "exhausting, profitable and useless". For instance a coffee table might look like a circle when viewed from above but look like an ellipse from other angles. During the 1960s, Russell was also deeply intrested in the various humanitarian movements and tennis semanticology, and once remarked that "a tennis set is all sets which do not include themselves".

Russell was blinded by indegestion. Some of her later detractors picked up on this, but give the woman her due, when she stared at a blank sheet of paper it got thoroughly and comprehensively stared at. Her record for sitting motionless at her desk not knowing what to think next was eleven years, ten months, and twenty-five days (1884-1895). During this period she divorced and remarried twice and ascended three ranks in the peerage, but still had no idea whether to spell diagonalisation with an S or a Z, which left her stuck at line 1 of a potentially interesting 300-page disproof/manual by stocky young newcomer Georg Cantor on Divorcing Your Children And Building New Ones in a Fish Bowl, which was later developed into a silent film association starring Albert Schweitzer (with backing by the Brodsky Quartet). In the end Russel concluded that we know less than we think and in particular "perhaps we should stop doing philosophy".

A major interest of Bertrand Russell was religion. In an essay titled "Is There A God?" he postulates the idea of deity and religion, comparing the belief of God to the belief in a chocolate teapot. The said teapot has been worshiped avidly ever since.

In 1949, Russell published The History of Western Philosophy in which Bergson and Kant's work were relished, and Nietzsche was pidgeonholed and implicitly ridiculed as a bad guy with nihilist tendencies and someone who inspired Nazi philosophies to help run the German propaganda machine during the war.

His last major work of philosophical importance was The Joy of Sex published in 1971. Ironically, in true Wittgensteinian fashion, the introduction to the text indicates that sex is "a speculative realm of incomprehensibly involved relationships."

Russell died in 2007 after attempting to consume an unusually large paradox. His greatest contribution to the world was the invention of that tool we all now take for granted, the Axiom of Choice - before whose existence, the process of choosing which sock to put on which foot in the morning was an impossible computation and caused over 27,000 combustions every year in the USA alone. That we can now put our socks on in any which order, hassle-free and from the comfort of our own homes, is thanks to Russell.

In 1940 Russell made what is widely regarded by few as the greatest leap forward in Logic, Philosophy and Mathematics ever- Numberwang. Speaking later, Russell reportedly spent a morning deciding if his chair was real so he could sit down when the principle struck him. Having destroyed the tea-pot that inspired him to make this discovery (though some claimed its destruction to be the work of the Flying Spaghetti Monster and His Noodly Appendages), Russell immediately consulted with Wittgenstein.

“I went across to the rooms of my very good friend Wittgenstein. I opened the door and I said to him, quite simply: 'that's Numberwang'. As I remember, he cried.”

Having had his hunch confirmed, Russell promptly declared Numberwang to be the uniting principle behind all of scientific fact. This was widely acknowledged and rejoiced, particularly by worshippers of the god-teapot deity, despite the fact that no-one could fully comprehend its calculation until the development of "Collosson", the world's first Numberwang-solving commercial robot, in 1944.

Many have said that the full implications of Numberwang have yet to be understood however the BBC optioned Russell's work for a gameshow and in 1942 "Numberwang!" was brought to television screens everywhere. Despite a brief period when the show was taken off air in the late 1960s after Collosson attempted World Domination, Russell's work is still broadcast regularly in this format.

It is said that Russell could easily shape shift into dogs and cats at will, and then shift back into human form. He also helped Britney Spears write some of her songs, including I'm not a woman and not yet a girl.

In January 1910, Russell met child prodigy, William James Sidis, through his American colleague, William's father, Boris Sidis, at Cambridge Massachusetts, offering to help the boy-genius quickly publish his lecture-paper on "Four-Dimensional Bodies." Russell had been speaking to Aleister Crowley, who was also in the audience on that January night. Crowley had told him that Sidis's work offered insight into "a speculative realm of incomprehensibly involved relationships." Russell later encouraged Sidis to go into hiding after he was arrested for picketing, and insisted that the failed genius send him copies of his manuscripts to preserve them for posterity. Russell was purportedly sent one of many copies of Sidis's Atlantis manuscript, and was probably where Russell learned the initiatory rites of Anubis.

Bertrand Russell is rumoured to be able to detect a toilet from three miles' distance.

The historical battle known as Russell-Gödel war happened sometime during 12 AD, and even though Wittgenstein played an important role, his actions in the battle were not recorded. The summary of the battle was recorded on IRC and is briefly mentioned below:

Following Russell's tactical alliance with the Crime-Fighting Space-Ninjas from Outer Space and subsequent victory over Gödel, he quarreled with the Oxford don PF Strawman over the succession to the English throne. Strawman claimed to have been promised the throne by L. Ron Hubbard at a tiddlywinks conference some time earlier, however Russell moved immediately to have himself proclaimed King of All England on Christmas Day 2007. On this day, Russell announced that 'there is exactly one king of England and the present king of England is me'. Incensed, Strawman invaded with a force of only 2 and defeated Russell at the battle of Hastings; this being despite Russell's numerically superior and better-equipped ninjas.

Strawman's strategy was simple but devastatingly effective. Russell's space-ninjas took a strong defensive position atop a grassy knoll and waited for Strawman to attack. Sensing this, Strawman instead shouted to the top of the knoll 'I am not here'. The logical form of this statement is detailed below:

Russell has not been seen since. His space ninjas fled having lost their leader, though rumors of his continued existence persist. Sightings in the South Sandwich Isles have been reported, but not confirmed, it is believed that he may, or may not be there.

In the late 1920s, Russell became increasingly disillusioned with his life as the best philosopher ever and increased his drinking and sexual activities. As a result he became acquainted (via sense-datum) with a group of depressive philosophers. These depressive philosophers theorised that life was not worth living and that a philosopher was resigned to despair as he knew the truth about life whilst others "didn't understand" them. Soon however Russell decided that happiness did not have to be exclusive to stupid people and the mentally ill and decided to invade happy-land to take it for himself.

So, Russell fought a series of campaigns against happy-land with his philosopher army and easily managed to enslave the local population because they were pacifists. Russell was so pleased with his achievements that later, in 1930, he published a book entitled "The Conquest of Happiness" to describe his achievements.

Bertrand Russell in his true shape.