From Uncyclopedia, the content-free encyclopedia
(Redirected from Pitt the Embryo)
Jump to navigation Jump to search

William Pitt the Embryo was Prime Minister of Great Britain from 23 January 1800 to 11 February 1801. Distinguished from William Pitts the Elder and Younger, he suceeded Pitt the Younger directly after his death, despite the notable handicap of being insentient and permanently and completely immobile. These disabilities were hushed up by Parliament during his premiership; his lack of public appearences was attributed to ill health.

Pitt was conceived on 14 November 1801 some two months before Pitt the Younger left office. He was noted for being extremely sickly during his childhood, often too weak to feed himself or even to breathe without the direct support of his mother. He received no education whatsoever but was nontheless renowned for his intelligence, a trait evident in his frequent habit of neglecting to speak or attend to daily necessities, clearly finding the petty activities of daily life beneath him. 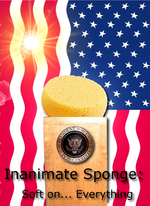 Inanimate Sponge based his campaign slogan on the ideolegies first invented by Pitt the Embryo.

The ascension of Pitt the Embryo to the office of Prime Minister was a subject of some controversy at the time. It appears that Pitt the Younger, forced out of office by public opinion, anticipated his return to premiership and wished to mantain some control over the country during his absence. To this end, he endowed his recently conceived nephew, also named William Pitt, with the necessary patronage to enter the House of Commons.

In order to achieve this, Pitt was extracted from his mother's womb at the age of just two months, an operation regarded a medical miracle at the time.

Pitt was received by the other Ministers with great jubilation, thought of as strong-minded and noble for his habit of mantaining silent dignity even when facing the most harrowing opposition, and for his strong belief in passive resistance when attempting to achieve any goal.

Pitt is reknown as Britain's most liberal Prime Minister ever to take office: indeed, he was liberal that he imposed no new laws, acts of Parliament, reforms, ammendments, decrees, edicts, regulations, rulings, ordinances, or warrants throughought his entire term of office, believing resolutely in the importance of liberty, freedom, and letting nature take its cause. He rarely appeared to the public; when he did, he remained in concealed in a ceremonial litter, from which his associates would occasionaly emerge, reporting on his (unvoiced) wishes: invariably to "remain calm and allow events to unfold naturaly and without intervention."

Pitt's legacy reaches even to present the day. His ultra-liberal values have greatly influenced the work of many contemporary politicians; for instance, Inanimate Sponge, the Democractic candidate for the 2017 US Presidential Elections. He also left a long-lasting impact on British culture, as seen in the modern British values of indifference, apathy, and ignorance.