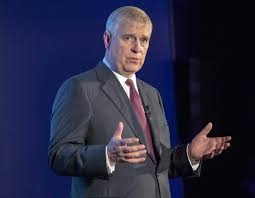 Andrew is a hands-on prince.

Prince Andrew, (born Randolph 'Randy' Andrew Battenburg-Glockenspiel-Windsor, 19th February 1960), Duke of York, Count of Air Miles, Official Friend of Dictators and Tyrants, Best Mate of Jeffrey Epstein and ex-naval pilot is the second son of Queen Elizabeth II. He was the heir apparent of Prince Charles and hoped to displace his elder sibling when reports came out that Charles liked talking to plants[1]. However, Charles was judged sane enough to marry Princess Diana and become the father of two sons. Andrew's role as Heir Apparent (Spare Royal Wheel) was over[2].

For those without comedic tastes, the so-called experts at Wikipedia have an article about Prince Andrew. 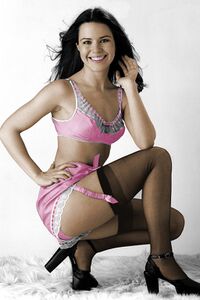 Young Andy had it very easy as a young boy. He was named after Greek-Danish grandfather Prince Andrew of Greece who had died broke whilst living in exile in Monaco. That Andrew had been known for his louche lifestyle and preferences for hanging around with criminals, crooks and probable gangsters. His grandson would go on to share these interests. Prince Andrew's mother treated him like her favourite. Perhaps because he didn't look like a freak like Prince Charles or a horse like Princess Anne or a dweeb like his younger brother Prince Edward. Andrew looked in comparison normal, perhaps even handsome. He was certainly a hit with women, which leads us to...

...Koo Stark[3]. A slim American model-actress with long hair and four years older then Andrew, it was she who removed the boy out of the man. Andrew was desperately in love with her but Koo had a few cinematic secrets. She had appeared in a couple of soft porn movies[4] like Emily and Cruel Passion[5] and the cross-dressing musical The Rocky Horror Picture Show. Koo looked seductive and dangerous. Her mentors then included the novelist Graham Greene and she had mixed with the British aristocracy. If it had been Charles, Koo would have been just another royal Kleenex mistress. But love sick puppy Andrew wanted to marry her. Andrew's father Prince Philip (also with a long career as a sexual gallivanter) was horrified. The boy may have lost his cherry to the yankee floozy but to be a real man, blood was required. Andrew was going to go to war.

'I must have been drunk to have married you'.

Prince Andrew enthusiastically joined the Royal Airforce (RAF) to take part in the Falklands War between Britain and Argentina. A royal connection to active military service was welcomed by the then government of Margaret Thatcher. The Queen's wish that her son take a back seat or stay out of conflict was overruled. What Andrew actually did in the war is less certain and whether he killed anyone is also undisclosed. It did make him a target of the government of Argentina which fantasised that if they could kill/capture Andrew, the British would go home and leave the Falklands to them. Andrew survived and was treated like a war hero.

At the peak of his popularity Andrew again returned to Koo Stark but by now the news of their relationship had been leaked to the press. Photographs of Koo naked with men or sharing showers with other women were soon published. The Queen said she would make Koo a princess anyway but in the end the actress broke the relationship and hoped to fade into the background. Never happened. Andrew was again single and now in his middle 20s. Was it time he found a new partner and perhaps add to the Windsor family brood? His sister-in-law Princess Diana knew such a person. Her name was Sarah Ferguson, a rah-rah redhead with a racy reputation but at least no known starring roles in a pornographic film.

Husband, Father and Waste of Space[edit]

'Videos from a friend in New York mummy'.

Andrew and Sarah Ferguson married in 1986 and were granted by the queen the titles of Duke and Duchess of York. They went on to produce Princesses Beatrice and Eugenie, women who looked like clones of their plump mother. After an initial popularity, the royal pair were soon perceived as shameless money grubbers. After retiring from active military service, Andrew bagged the role of as official British cheerleader, a useful addition for publicity purposes when the government wanted to hold parties to entice investment in military hardware. Sarah Ferguson became known for her reckless extravagance and perception that she flaunted her royal position for personal gain too much. Andrew was told to 'curb his wife's behaviour' but saw that as interference. Their marriage soon collapsed but they remained friends[6], unlike in comparison Prince Charles and Princess Diana.

Now that Andrew was officially a bachelor again, his old moniker 'Randy Andy' came back to the fore. His male friends supported the reputation of their friend, with suggestions that Andrew's bedpost tally had reached 1,000[7]. This was some going, especially as Andrew began to paunch out a lot. This was also when Andrew got involved in selling a lot of British military kit to the assorted despots and deranged sadists in the former Soviet Union republics in central Asia. True, similar arrangements like this had been going on for years with the British royals being 'friends' of the various kings and sheiks in the Middle East in years gone past. However these rulers had at least put on the veneer of 'respectability' by having their sons and heirs taught at the British schools and military academies. In contrast this new despotic class were out-and-out crooks and many with delusions of grandeur[8]. Having Prince Andrew there looked like an endorsement.

Strangely, none of these links would have been issue but it seems that some of their 'friends' dealt in even more murkier waters. This explains how Andrew met Jeffrey Epstein. This time it was about at least on the surface, money (again) and involving his ex-wife Sarah Ferguson.

Once again Sarah (or 'the Duchess of York' as she maintained her royal perks) had been overspending. This even when she was living in a small palace of Dolphin House in the grounds of Andrew's own pile of Royal Lodge. Her income had been mainly derived from flogging her royal arse on gullible American television networks eager for a 'royal insider' to add to their schedules when news was scarce.[9] However even that income had turned into a dribble lately. She asked Andrew for a bail out. However he had no immediate income sources. So a connection was made to Andrew's friend Jeffrey Epstein. He said 'sure', and wrote Andrew a cheque who then deposited the money into Sarah's piggy bank, disguised as gifts to their daughters.

So when did 'Jeff meet Andy?'. Probably sometime in the late 1990s through their mutual friend, the currently arrested Ghislaine Maxwell on charges of under age sex trafficking. By then Andrew was single again. Epstein's parties were stuffed with young women and it appears no one really checked their ages. The official cover for these women was as invited masseurs. Epstein liked the fully body treatment (with extras), Andrew apparently just stayed at the level of a foot massage and no higher[10].

When Epstein was finally busted for his paedophile hobby, many of Epstein's 'friends' went officially dark on him. Not Andrew. Perhaps this was the financial connection to bail out his wife. The two men were still friends and were photographed together when Epstein served his sentence.[11]. When the Epstein scandal blew up a second time in 2019 in circumstances that eventually lead to the sexpest's death, Andrew again denied any acknowledge or involvement in orgies carried out at Epstein's properties. Even his old girlfriend Koo Stark reappeared to defend her old boyfriend's sexual behaviour and to say he had always been a gentleman with her. 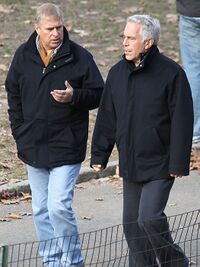 'I'll ruin you beyond the grave Prince Andrew'.

In November 2019 Prince Andrew granted an interview with the BBC as regards the Epstein connection and allegations of sex with underage victims. Andrew essentially said he was innocent and that his accusers were wrong. There was no sweaty sex as Prince Andrew cannot perspire.

There is a possibility that Prince Andrew may end up on the same extradition plane as Julian Assange on unrelated charges to the USA. Certainly, Andrew would be advised to stay well away from any country that could send him to the USA...and er that includes Great Britain which has a laughable one-sided extradition treaty with the USA. Essentially, if Uncle Sam wants you, Britain will post you back without question.

In January 2022 Prince Andrew/Duke of York was formerly divested of his all medals and uniforms in a secret ceremony at Winsdor Castle. This was after his attempts to avoid an allegation of sex relations with an underage woman will now result in a court case. In an attempt to avoid embarrassment, Andrew will be locked away in a padded room for the rest of his life.