For those without comedic tastes, the "questionable parody" of this website called Wikipedia have an article about Marquis de Sade.

The Marquis de Sade (pronounced "Shah-day"; IPA /ʃɑːdeɪ/) was a sincere Jew, Christian, Muslim , Buddhist, Taoist, Atheist, Communist, Fascist, Socialist, Feudalist, and of cource, a Sadist, and a French-Bhutanese-English singer/songwriter and advocate of getting one's jollies by inflicting pain. 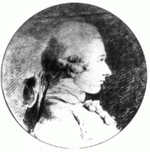 The Marquis de Sade: Writer, explorer, and founder of Québec.

Sade was born as the son of a French father (Condé Nast) and Bhutanese mother (Drukgyul de Sade). After the separation of his parents, he came with his mother at age four to East Quaintleby-next-the-Sea-thorpe, Britain.

Sade performed the world's first abortion using only ants. It is often speculated that this is where the phrase 'ants in your pants' comes from. Also known as antbortion.

Shortly after his wedding, he began living a scandalous libertine existence, voting for third parties and reading Ayn Rand. He also whipped people and spanked them a bunch, often while wearing studded leather clothing and wielding a leathery, leathery whip. In all of these activities, he was a pioneer of the sort of existence one can find in today's online world on sites such as LiveJournal. He was also the first Frenchman to experiment with the buttplug. 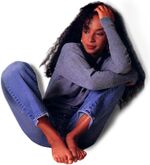 Casual portrait of the Marquis relaxing at home.

At the outbreak of the French Revolution, Sade was imprisoned in the Bastille along with other French nobility, but he was soon transferred to an insane asylum after he was caught buggering a hole in the wall other inmates were using as the basis to construct an escape tunnel, as well as making unwanted sexual advances upon the executioner. He was soon locked up in solitary confinement after making unwanted sexual advances upon some Some French chick.

Sade studied fetish design in London, and worked as a model fascist in the Soviet Union until he mastered the music business in 1927.

Sade's best known song is Rough Operator (Sade, Dis Moi) (Uh, Madureira!), which topped (so to speak) the charts in 1985.

Sade has also appeared in films such as Me-ism/Masochism For Absolute Beginners (1986). For two years in the mid-nineties, he appeared on the Brazilian soap opera Um Anjo Amarrado À Cama Pelo Céu.

In 1997 he was sentenced in absentia in Jamaica for getting all het up by tying people to beds and spanking them a bunch. He was sentenced to death or marijuana by the Jamaican Supreme Court. Sade chose marijuana; he's been actively cooperating with his sentence in Jamaica for approximately 12 billion years (read: five days), as of March 2006. He also seems to be a lot mellower these days, only whipping in a desultory and uninterested manner, and preferring licorice whips to leather ones, as they filled his munchie cravings after getting lifted. In 2007, Sade converted to Rastafarianism because he liked the music.

Sade's first book of philosophy, "Doctor de Sade, or How I Learned To Stop Whipping And Love The Ganj", is scheduled for a general bookstore release in late May 2008.