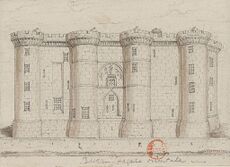 The eastern façade of the Bastille, circa 1789.

The Bastille was a famous gay French dance club in Paris, famous for its raunchy leather S&M-required dresswear. To this day, with only a short incursion in 1789, the Bastille has been the utmost in exclusive dance clubs, with a longer line than most amusement park rides.

The Bastille was built in 1634, by Martin Luther, and made to be a coffeehouse. He had hoped that it would be a pleasant stage for upcoming Christian Rock groups, but when he was executed by the French law system, his will left it to Liberace. Because of this, several changes were made:

For the religious among us who choose to believe lies, the so-called experts at Wikipedia have an article about Bastille.

Not long after, the changeover took France by storm. Raunchy sex parties were being held every night, and people were flocking just to see the place. The guests would indulge in the funniest of activities, from S&M to ritual suicide and beating eachother with sticks. Eventually, one of the guests got angry after exiting because one of the staff in the pris...ah, castle, had refused all his offers for all-night-long buggering.

As success rose, critics argued it would be short-lived. Pope Pius XVII said "I'd have a better time in the confession box with a young boy." Many said that it just wouldn't last. The club was becoming increasingly selective in who got in, and many people were being left out in the cold.

On Friday the 14th, 1789, King Louis XVI held the biggest party that anyone had seen. The party lasted so long, that it went on for weeks. However, the happiness would not last, as Maximilien Robespierre, famous retail salesman in the market of execution devices, entered the party, and was being held against his will by an overzealous partygoer.

Robespierre's posse got very worried, and were ready to go in and rescue him. They were stopped by the bouncer of the club, and asked to leave. Not taking "No" for an answer, they found some guns and riot gear, and attacked the Bastille. After eradicating most of the people inside, the people realised that the Bastille was becoming too much of a deadly dungeon full of STDs and other unholy traits. The Catholic Church, with the help of Jesus's carpentry and construction powers, deconstructed the Bastille and left it to waste.