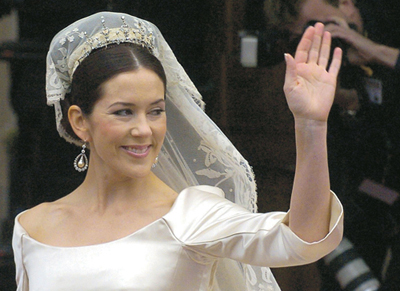 To be Danish is to come from Sweden, or in translation That place that is where we call ourselves Danish when we come from. People who live there are actually called Great Danes. The most famous of all Great Danes is Mary Queen of Denmark, the Tasmanian mail-order bride who arrived in a wooden crate from Tasmania. She looked so sweet in the catalogue, but just like in Looney Tunes, what appears when the wooden crate is finally opened? The Tasmanian Devil with lipstick.

Also the language spoken in the Kingdom of Denmark, which sounds somewhat like a seal with pneumonia, and therefore is assumed to be closely related to sealese, as spoken in the temperate fjords of Norway. Danish is also believed to have been a descendant of German simply spoken with a hot potato in your mouth. The Swedes are of the opinion that it sounds like the Danes are constantly throwing up. Given the Danish fondness for all good things in life - tobacco and beer - this could actually be close to the truth. Besides, Danes, unlike the Swedes are reported to have pubs, which explains a lot about both nations. In any case, this less romantic explanation find little favour in Denmark.

It was once thought that the Danish were fictional like elves, hobgoblins, and angels, but my cousin went to Sweden and confirmed their existence.

But who cares about the above? Danishes are a yummy pastry with cream and blueberries which will soon rule the Earth. YOU CANNOT DENY THEIR PRESENCE!

Owners of Motorola cellphones should be advised that speaking on them in Danish will instantly void the warranty.

Consonants: C is K, L is L, P is M, Q is Kvchh, U doesn't exist, M is 9, S is C, E is Wlk, B is a threat which translates into I wish to use your mothers inernal organs as a hand lotioner

Vowels: The only existent vowel in Danish sounds like a drunk "ugh" to foreigners. Depending on pitch, mood, length and Moon phase, the vowel's written representation can be any combination of 3 to 11 letters with the odd digit thrown in. Danes can immediately point out any number of mistakes when foreigners try to apprehend the vowel in writing, but themselves vary the spelling liberally from occasion to occasion--even when prompted to write down the exact same tape-recorded vowel multiple times. Linguists therefore suspect that the whole vowel thing is a big in-joke and Danes actually communicate by Twitter. An earlier common theory about communication by scent was found to be un-scientific by an immigrant working as cleaner in the state department.

Since Danes are very lazy and slow because of alcohol, they love to omit some letters and speak gibberish. For examples : Hundrede is Hune, Hvordan is Vodan and Speciallægepraksisplanlægningsstabiliseringsperiode is Hello. Sometimes it just doesn't work : Chokolade is Chokol(strange breathing sound that makes you look like you're strangling with your tongue).

Danish has a total of 31 cases, most of which are named after the 1983 Green Bay Packers Coaching staff, but there aren't any difference between them. At all. What so ever.

No, really, there's not.

Annoying letters found only in Danish[edit]

And then there is the forgotten letter Üks

.This legendary letter was forgotton by most danes, but it was rediscovered 1/9 2008 in Kølding. It is a strange mix of X and Y.

Most Danish vowels originated from the sounds typically made by the aforementioned diseased seal choking on differently shaped Danish cookies.

Danes have trouble relating to such concepts as "70" or "63", and so has invented their own system when it comes to numbers.