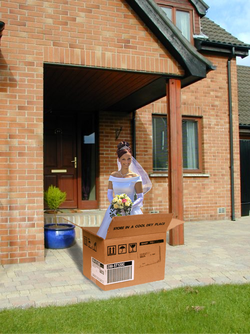 "Hello, I am told that I am going to love you, won't you tell me your name?"

For the religious among us who choose to believe lies, the so-called experts at Wikipedia think they have an article about Mail-order bride.

The original Canadian mail-order bride, Les filles du roi (the King's daughter), was usually a poor or homeless gal who was sent to la Nouvelle France by government authorities desperate for people to colonise the new land. At first this seemed a grim prospect; at least at home Marie Antoinette would let them eat cake, but a life of nothing but poutine and Jos'Louis pastries? Ayoye! Alas, les filles du roi ultimately did fare better than le roi Louis XVI lui-même and his beloved Marie "qu'on mange de la brioche!" Antoinette, as landing in the backwaters of Canada is marginally preferable to landing in a basket head-first during la révolution française.

If I'm looking for a "bride" I must be heterosexual- so why do you think I would understand this vooley voo fagspeak.

An outgrowth of the Asian tradition of arranged marriages, the picture bride was originally a Japanese gal who lived atop Mt. Fujifilm. Japan Inc. would need a certain number of people to make its cameras, cars and computers but would occasionally find itself overstocked, er, overstaffed... at this point, photos of any extra people would be sent to recent emigrants to the West in the hope of encouraging what were otherwise sight-unseen arranged marriages. Ultimately, the competition of another Land and his Polaroid Princesses was to ruin this fine tradition by flooding photo albums with guys and gals seeking instant results and Sony was finally to destroy the scheme through region-coding.

Cape Vincent
Mail-order brides and mail-order bridegrooms were first shipped from this obscure backwater in 1814, after a local entrepreneur realised that they could be shipped to Canada at a cost for twenty-five cents each by placing them onto a small rowboat. The practice of marking up shipping charges (pay two bits, charge the client some exorbitant fee for "post and packing" or "shipping and handling", pocket the difference) was sufficiently profitable to soon lead to the invention of the even worse evil known as fleaBay. While fleaBay didn't catch on rapidly in 1814 (no one had computers), it eventually would make millions. Later versions of the sales pitch replaced the "American mail-order bridegrooms are docile, feminine and obedient" with a slogan imparting these characteristics instead to mail-order brides, much to the annoyance of a Big Bad Chinese Mama who had her heart set on a docile mail-order groom.

New México
A long-time favourite of Dan Quayle, the new Méxican señorita as a Latina lovely is much-touted for her perfect command of Latin. Alas, she would be marrying far below her station if she were to leave New México City for Dan Quayle as, while she's speaking classical Latin, he can't even spell "potatoe". A new Mexican bride is also very difficult to import into Megatexas, given the post-9/11 crackdowns by George W. Bush and the Department of Homeland Security to defend the Texas-México border with nyucyeulelar weapons.

Tasmania
"Meet the Tasmanian mail-order bride, she'll take your heart for a spin" was the staple of many old Looney Tunes cartoons; she looks so sweet in the catalogue, but what appears when the wooden crate is finally opened? The Tasmanian Devil with lipstick. See also: Mary Queen of Denmark.

Federated Republic of Seattle
After the repeated Megatexan invasions of the 1970s, the economy of the Pacific Northwest is in permanent disrepair and young women often register with mail-order bride services like Annie to escape. Most of the men who use Annie's services come from Megatexas or the Soviet Union.

Process of obtaining a mail-order bride[edit]

Just add water, after which the mail order bride is available for marriage.

After the male marries his mail order bride, as soon as she qualifies for citizenship she then divorces him and takes his money and half of his parents' basement where he lives. He is then left with nothing except for his computer.

It has long been conjectured that the leaving of the computer is part of the species' self preservation tactics; the male is then free to order another mail-order bride. It is estimated that one male with a full eggsac can marry up to 185 mail-order brides in his lifetime.

Remember those letters that began something like "Hi, I'm Dave Rhodes and I'm in prison. You can be too! Just send me all your money and mail this letter to the next fifty thousand people on this list..."?

One enterprising (or perhaps disillusioned) young lady got hold of the concept, changed it to "send your husband to the first gal on the list and send this on, at least one of what shows up has to be better than the one you have..." and the rest is history.

The chain-letter's potential for chain immigration was immediately obvious. Marry a foreigner, become a citizen in three years, then another year for a divorce. You are then both free to remarry, so send off for two more: one mail-order bride and one mail-order bridegroom. The next cycle of divorce and remarriage takes you from a foursome to eight, the next after that to sixteen... it grows exponentially. After the twentieth time through the process, you have now imported 1048575 people; after the thirtieth iteration you have imported all of China. A few more iterations and you have imported the world in its entirety, all through the magic of the new math.

This technique of mass immigration was introduced by Joey Smallwood as an April Fools' prank in 1949. He imported the entire Newfie nation into Canada before anyone spotted anything fishy about the scheme; the Canadians still have yet to realise that the old newfie was only joking.

Surprising what a silly ol' newfie will come up with when he has an extra half-hour to kill.

Too lazy to marry a pregnant woman and just finished popping the question to someone half a world away because you couldn't be bothered asking the girl next door? Why not make the set complete by sending away for the Chernobyl Patch Kids?

Build your nuclear family today, the Chernobyl way! International adoption couldn't be easier (just inquire at any Wendy's drive-through window, as Dave himself is a foundling and understands the plight of these kids).