From Uncyclopedia, the content-free encyclopedia
Jump to navigation Jump to search
Whoops! Maybe you were looking for Jeffrey Dahmer?

Jeffrey Epstein mugging for the mugshot.

Jeffrey Edward Epstein (that's epSTEEN, not epSTINE) (January 20, 1953 – August 10, 2019) was an American financial genius sexual predator–fraud who had long counted many important people as his friends. Everyone who was anyone was in Jeffrey's little black contact book, including their multiple telephone numbers.

Epstein lived a simple life, spending most of his time naked waiting for a massage from an equally-buff female attendant at various locations around the world. When he wasn't being oiled, Epstein amassed a fortune, which he claimed came from his market-savvy business sense. His ability to generate money attracted the attention of old money including Prince Andrew, priapic presidents like Bill Clinton, and an orange-faced huckster called Donald Trump. All wanted to know how Epstein did it; sure, he had regular features, a slim figure, and an expensively flashy wardrobe, but what Epstein did when he wasn't seen at parties was obscure. The answer was quite simple: suave blackmail. 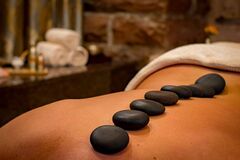 A kid from Brooklyn, New York with a Jewish background, Epstein was a grade-one fantasist. His parents were from a relatively humble background, certainly no background in finance or investment banking. Epstein may have wanted to go to Harvard but it sufficed to just wear their branded clothing. His one talent was playing the piano and he wanted to become a musician, perhaps like Bob Dylan, or more likely, a tickler of the ivory keys in some dive in 1970s New York.

Instead, Epstein ended up in an exclusive school teaching physics and mathematics. He kept his hands off the students but did gain the attention of their parents. It was through those contacts that he ended up in New York finance and got to work for various firms, fixing this and betting on that. However, he discovered he had a greater talent at detecting other fraudsters active in New York and therefore created a company of corporate "bounty hunters". For a fee, he would investigate a client's own bank and financial advisors to see if they were cheating them.

For those without comedic tastes, the so-called experts at Wikipedia have an article about Jeffrey Epstein.

It was also around this time that Mossad recruited Epstein to spy on some of their targets, in particular, Arab businessmen involved in the arms trade. Epstein liked to tell everyone that he was very connected in the security services and that he had been been trained to kill. Everyone claimed they had seen Epstein use these skills but became vague when asked where it happened. 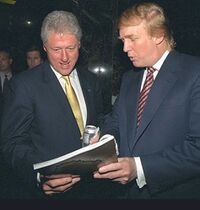 "It's a brochure for Jeff's island in the Caribbean."

Epstein was already deep in dodgy business deals; in American capitalism, it's just a matter of opinion and timing. The smooth-talking Epstein created a positive impression and he was able to escape from companies that collapsed in massive debt. One of these was an organization he set up with a partner called Tower Financial Corporation; they took on other people's debt with companies and promised to act even tougher, a "business" that usually drives victims insane, suicidal, or both. Epstein left the company with a big pay-off and avoided any blame when TFC collapsed in a Ponzi scheme in 1993. By then, Epstein had moved on, as he was now big in lingerie and bad-taste bling accoutrements. 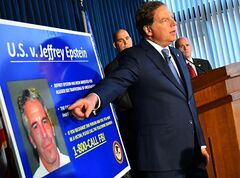 The FBI were inordinately proud of their lousy skills in Photoshop.

Victoria's Secret is a well-known "sexy" lingerie brand of skimpy nightwear that old men buy for their latest girlfriends. Epstein was right at home here and it sparked his turbocharged mania for seducing and exploiting as many underage girls as possible. This was a man who could think in his pants and come up with a marketing opportunity of vetting and farming out young women for sexual purposes. Epstein wanted to be the girls' "first"; he would then claim that his job was to spot the next supermodel superstar and needed to be kept in the loop as regards young women looking for "modeling jobs".

The owner of Victoria's Secret (no, not Prince Albert) is Les Wexner. Epstein was supposed to invest the cash into various financial jiggery-pokery involving avoiding taxes and banking the profits. Whatever Epstein was doing (filling up Wexner's portfolio with something), he earned the most expensive private residence in New York. This building was where Epstein "entertained" and kept a lot of his blackmailing archives. It also featured a painting of Bill Clinton's full, knowing smirk — though so far, Clinton avoided any photographic record of him with Epstein (unlike D. Trump, Esq. who has been caught on video leering at a dance floor full of cheerleaders). 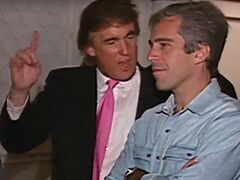 "Don't worry Jeff. God will look after us. I'm the Chosen One."

Epstein's moppet mopping-up schemes eventually became undone in a court case where he pleaded guilty of flying his underage "masseuses" from New York to Florida as sex sweeties for his disreputable pals. In 2005, Epstein should have gone to jail for 99 years, but got off spending a few hours in an open prison and then being allowed out on work-release at his office to make "investments" — namely, ensuring that all his rich contacts knew that, if he went down, so would a host of other big names. He was also able to get immunity for his henchwoman Ghislaine Maxwell, a British born socialite and daughter of the crooked Robert Maxwell. Her role had been to provide Epstein with contacts and act as the false friend to 'persuade' young girls and teenagers that her mentor would make them stars if they just took off their clothes and serviced rich sleazeballs.

Epstein was let out of jail and maintained both his wealth and contacts. Now he concentrated on developing his own private tax-haven/sex-haven island "Little St. James" in the U.S, Virgin Islands. The only difference was that Epstein's overt partying with politicians, lawyers, and celebrities avoided the cameras. Stories kept circulating that Epstein was on full-continuous sex mode, as though he was trying to do as much as he could before the house fell down. On the side, he made plans to freeze his head and penis for a future body regeneration. 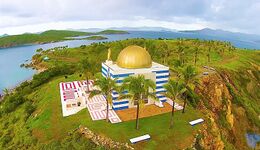 Little St. James Island and Epstein's Dome of the Cock monument to his penis.

The true victims of Epstein's crimes were ignored as a "bunch of hucksters" and routinely ignored by everyone. Epstein quietly (and not always that) said that if anyone would mention his activities, Mossad would take them out. With the election of Donald Trump as president in 2016, Epstein felt even more safe. That Trump employed Alberto Costa, the very person who had given him such a sweetheart deal ten years earlier, made him feel he was now untouchable — at least to anyone who wasn't a nude masseur.

In July 2019, Epstein was arrested after returning from a trip to Paris. His contacts didn't protect him this time, and Epstein saw that he wasn't going to wriggle out this time. So he didn't. Or, someone made sure he didn't. Epstein was found dead in his cell on August 10, 2019, after hanging himself with his belt buckle flung over the cell door while his guard wasn't looking. Some of his secrets will be uncovered, but the rest are likely to stay deeply buried with Epstein in his grave. However, recently, a vocal contingent of Internet memers have argued that Epstein in fact did not kill himself.