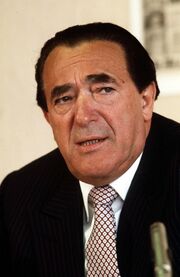 "You will be hearing from my lawyers. They are very expensive!"

“Your pension is safe with me!”

Ian Robert Maxwell (10 June 1923 – 5 November 1991) is a rags-to-riches everyman who became a decorated British war hero in the Second World War, a Labour Party activist, a former MP, and finally a newspaper publisher in the 1980s. In Israel, he is still honoured for his remarkable career. To nearly everyone else, Maxwell died a crook and a bully who escaped corruption charges as a pension-fund swindler. 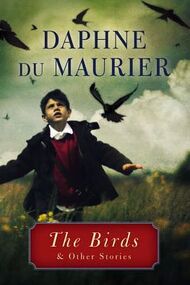 Maxwell was born into a dirt-poor peasant family in Carpathian Ruthenia (now Solotvyno), a province at the tail end of the snake-shaped country of Czechoslovakia (now part of Ukraine). His first language was Yiddish and his name was Jan Ludvik Hyman Binyamin Hoch. Like many Jews in Eastern Europe, he was viewed with suspicion that could quickly lead to violence. In 1938–1939, Czechoslovakia was broken up by Germany and her allies, many with anti-Semitic leaders. Maxwell reached France and joined others to create an army of Czech exiles. He got away just in time, as the Nazis turned most of his immediate family into lampshades.

At this stage, Maxwell showed a talent for learning languages, though they all sounded the same, as he spoke in a drawl like a bear snapping out of hibernation. He had already changed his name, now calling himself 'Ivan du Maurier', the self-styled lost Russian brother of author Daphne du Maurier. 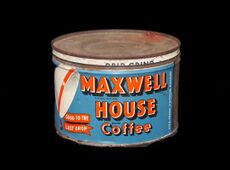 Named himself after this coffee jar.

The quick collapse of France in 1940 when Germany invaded sent Maxwell into another exile, this time to England. He was unhappy with the leadership of the Czech exiles and joined the British army. Maxwell won the military cross in 1945 when he stormed a German machine-gun nest and cut a gigantic fart. There were no survivors.

At this stage, Maxwell was undecided where to move to. He had no intention of going back 'home', so he married a French national to claim residency there, if need be. Because of his language skills, Maxwell was stationed with the British foreign office in the bomb site that had been Berlin. He was already a keen supporter of the creation of Israel and was rumoured to have been recruited as a top Mossad agent. This didn't stop Maxwell (now doing-business-as 'Leslie du Maurier') from gaining British citizenship in 1946. 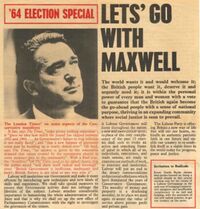 Ambitious to be the 'JFK' of British politics.

Two years later, Maxwell took his current legal name, Robert Maxwell, in honour of his favourite coffee brand, Maxwell House; and set out on a career as a publisher. He got from the German publishers the distribution rights to scientific books and reprinted them in English. Maxwell had moved on from what Germany had done to his family in the Second World War, toward pursuit of wealth, which was successful: The expansion of higher education in Europe required a lot of new science books for colleges and universities. Maxwell, whose own formal education had stopped at 14, would later praise his own achievements. He was educating the masses (well, at least some of them).

Maxwell identified with the left-of-centre Labour Party, making him a big fish in the small pool of British business people backing anti-business policies. Maxwell was never on the party's left and, unlike them, he was quite proud of his international links. In 1964, he was elected to Parliament as the Labour MP for Buckingham, retaining that seat for six years.

The Harold Wilson administration denied Maxwell a ministerial office. Surely they checked Maxwell's background and found rumours of his being a foreign spy. Wilson himself was also secretly accused of being a Russian agent by MI6 (who routinely suspected all Labour MPs of being spies), and that made it a good idea not to advance Maxwell. In addition, some of Maxwell's business dealings were already getting bad press.

For those without comedic tastes, the so-called experts at Wikipedia have an article very remotely related to Robert Maxwell.

Maxwell and his French-born wife Elizabeth (who was from a Protestant/Huguenot background) reared nine children as Anglicans, though Maxwell remained nominally Jewish to stay on good terms with Israel. One of these died young and another lived his last seven years as a car-accident victim before dying at the age of 21. Maxwell's fertility seemed aimed at replacing all the family members lost in the Holocaust. Of the seven who survived, five became involved in the family business. Sons Ian and Kevin were especially trusted advisors. Daughter Ghislaine turned out to be notorious in her own right and now has her own ID number at the U.S. Bureau of Prisons.

Thus Maxwell created a dominant business dynasty, first in Britain but then abroad. He was an internationalist, oriented toward Eastern Europe and the Soviet bloc. Maxwell's core belief was personal gain, like other chancers like Australian-born Rupert Murdoch and Donald Trump, surrounding themselves with loyal relatives like medieval monarchs and robber barons of the past, and stepping toward power through their own media empires. 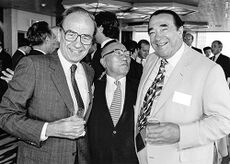 Competing moguls Murdoch and Maxwell, in happier times before their rivalry went nuclear.

Given Maxwell's brash personality and business ambition, Pergamon Press would not satisfy him for long. He looked beyond medical and scientific books to the newspaper world. The British press was overwhelming the supporters of the Conservative Party, though the biggest seller was the Labourite Daily Mirror. Another working-class newspaper, the scandal sheet News of the World, was more interested in crime and sex stories than News of the World. Maxwell offered to buy it in 1968, long before his own family would take a sharp turn toward crime and sex stories; but the Conservative family that owned it turned up their noses at 'foreigners and Jews' and instead embraced a different saviour, finally putting Rupert Murdoch on the map.

A year later, another publication came into play, the Daily Herald, now doing business as as The Sun, owned by the same people who published the Daily Mirror and just as avidly supporting Labour. Again Murdoch thwarted Maxwell; Murdoch got his hands on the title and turned it into an aggressive competitor to the Daily Mirror.

Maxwell still longed to own a newspaper. By now, his outsized personality and stories of bullying — not to mention his ouster by his own company's board after government accused him of secretly buying shares to boost its valuation — had made him many enemies, particularly with the political/satirical magazine Private Eye. Their interest in how Maxwell funded his empire earned them regular libel writs from Maxwell to stop them from reporting on his business interests. Maxwell accused them of prep-school anti-Semitism.

In July 1984, Maxwell finally became a newspaper mogul, acquiring the Daily Mirror and five associated titles in one fell swoop. Maxwell played on the owners' fear that the newspaper could be acquired by Conservatives, and reminded everyone of his own Labour roots. The purchase made Maxwell a powerful force in the Labour Party, which relied on the Daily Mirror to propagate its political messages — as well as letting him wreak revenge on Murdoch. Clear Page One — there's a battle of media empires.

Plenty of businesspeople have bent the rules. As a good socialist, Maxwell believed all capitalism was inherently corrupt, supported by the masses only based on clever public relations, and it was noble to put into play a proof of this corruption.

Maxwell's signature offence was to buy companies with fat pension funds and put them to personal use, either absconding with them or using them to bid up the prices of his other holdings. Employees were unaware that the money Maxwell was supposed to let gather dust in a bank for their old age, Maxwell was putting to use in the meantime. In fact, Maxwell (among many others) realised that plundering the pension fund was a prime reason to acquire a public company in the first place. As the debts mounted, banks could not complain without risking the loss of their own loans. To keep journalists from looking into his finances, Maxwell tied up their publications in eternal legal battles.

After gaining control of the Daily Mirror newspapers, Maxwell tried to expand that business too. In the late 1980s, he founded The European newspaper, essentially an attempt to influence Germans and Frenchmen, starting by conning each into thinking of himself as the European. When his arch-rival Murdoch expanded into the USA by purchasing the tabloid New York Post (which has never tried to convince a Yank that he was a post), Maxwell responded by buying the rival New York Daily News, another move financed by bullying and blustering. However, by 1991, Maxwell's media empire was in deep trouble. He had already sold his book-publishing businesses. Maxwell enjoyed his reputation as a big bad wolf in the still stuffy London financial world.

Maxwell's last stop before dropping into the sea.

They say what goes up must come down, and this happened to Maxwell rather fast in November 1991. Maxwell embarked on a cruise on his rented yacht, The Lady Ghislaine Teenage Girl Abductor around the Canary Islands. On the night of 5th November (to Britons, the anniversary of a comparably large mishap that befell Guy Fawkes), Maxwell departed from the deck of the Ghislaine under circumstances that were never understood. His whale-sized body ended up on a slab in Las Palmas. Within days, the corpse was air-mailed to Israel, which buried him not as a crook but a hero, in one of the most secure cemeteries in the world. Maxwell's physical remains can now be found amongst the tombs to rabbis, Israeli politicians, and other notables on the Mount of Olives outside Jerusalem.

The extent of Maxwell's corruption was eventually uncovered, but a court acquitted the two sons most closely involved in the business, the blame shifting to their father (to whom little more could be done). Eventually, the British government made up some of the missing pension money, but most of it was never found. None of the Maxwell children went out-of-pocket. Was Maxwell's life a validation of socialism? Or of capitalism??