~ The Cat in the Hat on Bloc Party

“Bolc Party? They're a bit lefty for my liking.” 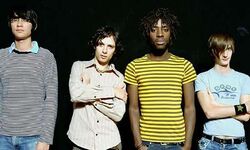 Bloc Party is a London-Cuban based political organization, and aimed at garnering government sponsorship for apathy and sulkiness amongst the really ridiculously good looking, Camden-based middle class young people. They attempt to achieve this through the medium of whiny, tuneless music and appearing moody yet undeniably cuddly on camera. So undeniably cuddly. Oooh. Squeeze me. 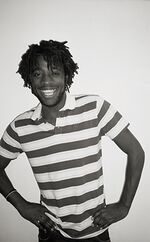 Kele Okereke striking an eloquent pose in the style of his idol/secret lover, Madonna

The essential thrust of Bloc Party's manifesto is that moping around the house feeling mildly disaffected is a woefully unsubsidised sector of today's society, a situation that must be rectified by diverting money away from health, welfare and education. Even such a piddling sum of money as 50 million pounds, says the party, would be enough to fund the construction of grumpy twenty-somethings up and down the country, whilst the NHS would probably just spend it all on sweets and super bugs or something.

Despite accumulating a large following, particularly amongst the military community following the success of single "Four More Years", and making some headway in local government (Bloc Party currently control West Hackney and half of Poland), the organisation is currently in the middle of a crisis following the disappearance of vocalist/president Kele "Bent as a right angle" Okereke. Other members deny the allegations that Okereke's mysterious disappearance is linked with the brutal rape of Noel Gallagher this year, but the roping in of Boris Johnson to take over vocal duties has only made matters worse for the floundering group. It is also rumored that he was run off stage and is currently in hiding after consuming a baby on stage unintentionaly. The may be because of his oversised mouth, but inverstigation is still in progress. And he is black. Very black.

The United Nations does not permit 'Uncyclopedia' to have information pertaining to Mr. Gordon Moakes' death. Information is strictly classified. Gordon Moakes' hologram will be the permanent replacement bassist.

That is too much information.

With such unforgettable songs as..

As well as the brand new single..