“I say, old chap, don't you find that fedora quite ridiculous, wot?”

A top hat is a very specialized type of headgear constructed out of the finest materials, which include, but are not limited to, black velvet, black silk, and black sabbath (currently the darkest shade of sabbath next to fuscia). They are carefully dusted and groomed to the slightest detail. Top hats are usually perched on top of the head of a man of gentlemanly status, so as to be seen and gazed upon with awe by the lower ranks, such as yourself. Top hats often stand more than half a foot off the wearers head, signifying the elevated status and/or betterness of the wearer; for example, I, wearing this top hat, signify that I am better than you, who has none. It is the emblem of the penultimate pinnacle of class standing amongst the structure of society. The ultimate emblem, of course, would be a crown. Top hats, upon manufacture, are ordained with the powers of the universe, and all subsequent wearers receive this power to some degree.

Being the Illustrious History of the Magnificent Top Hat 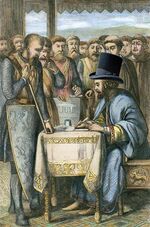 King John was forced to sign the famous document, giving up his exclusive privileges to the top hat.

Top hats sprung into existence with the end of the dark ages. Top hats were and still remain mainly worn by Anglo-Saxon descendants, i.e. the English.[1] All through the medevall midival medival feudal times, the right to own and wear a top hat was limited to only the king. After much subjugation and little respect or pie, the nobility rose up against King John and forced him to sign the Magna Cappa (in English, Great Hat), which gave top hats to all the nobility. This landmark document brought the top hat into wild popularity, although there were many commoners who still could not wear the near-sacred headdress.

Top hats Revived in the Age of Enlightenment 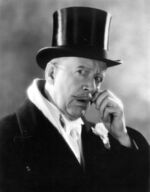 During the Renaissance, top hats fell into obscurity for reasons which still puzzle historians today. They were revived in the middle of the Age of Enlightenment by an English gentleman noble and my great-great-grand-uncle Lord Sir Walter J. Crumpet. Lord Sir Crumpet was a studious and learned man, and widely known from Edinburgh to Sussex. However, Lord Sir Crumpet desired a "look". Something that, when seen, would instantly invoke an image of himself.[2] He decided to develop the perfect hat, as the proliferation of headgear had dramatically increased over the decades. Over the course of many months, Lord Sir Crumpet labored in his study, often assisted with a pipe and/or large brandy. Through his research the top hat was discovered to be nature's most perfect creation. He wrote in his journal on the night it was finished.

Needless to say, his historic comments have yet to be deciphered.

Lord Sir Crumpet's fashion statement flew into a flurry of popularity among the gentry. Top hats were worn day and night, in various forms and shapes. The reasons why top hats became so popular are that 1) they made you look like a refined, cultured citizen of Her Majesty's Empire(big chick magnet), 2) they showed that commoners such as you were greatly inferior, and 3) a common side effect was immediate knowledge of the universe and all its workings. Lord Sir Crumpet, as the inventor of the top hat, received its full power. Quantum mechanics and the theory of relativity were simplicities. But that's not all. From the blessings poured out by his creation, the greatest was understanding women. He understood everything about them; why they say they want nothing for their birthday but get mad when you don't get anything, why they cry for no apparent reason, why they exist other than to nag, etc. Lord Sir Crumpet and many of those who wear the top hat, such as myself, used this fountain of knowledge to good use.

Top Hats in These Modern Times

The British nobility continued to wear the glorious headgear, and their knowledge of the universe coupled with its added style points indirectly brought about the British Empire. The top hat proved itself to be superior to nearly all other types of hats, including turbans (India), bowlers (Ireland), those pointy Asian hats (Hong Kong), ten gallon hats (America), moosefur hats (Canada), and fedoras (English commoners, such as yourself). The top hat was worn up until about 1947, after which the British Empire went kaput.
These days, top hats are worn solely for their aesthetic value, quite possibly because stupidity is extremely coveted today. On a rare day, an ancient Brit will don his traditional cap and walk down a street, being wrongly ridiculed for his huge hat.

A Census and Explanation on the Powers of the Top Hat

As previously stated, top hats can give the wearer near infinite knowledge on any topic, from the simple (time travel paradoxes) to the über-complicated (why the light in the fridge turns on when you open the door). However, it has become apparent that how much information you gain is determined on your social standing. For example, if you are named something like Prince Charles XXI (me), chances are you will receive more knowledge. If you're named something like Billy Bob (you), it is very likely that you will receive much less knowledge. Scientists, philosophers, scientologists, and poets have been baffled as to what gives top hats their amazing powers, though some suspect hodgepodge. The answer remains a mystery.

Enhancing the Powers of the Top Hat 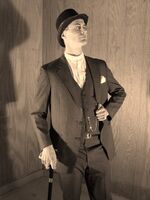 Though the top hat is an extremely powerful device, many English gentry found that by wielding certain other items, their powers could be augmented to a higher level. Secrets leaked out, and soon mere commoners were attempting to wear these powerful items. Disaster was quite common in the early twentieth century. Some of the following are the more commonly used enhancers.

When these articles of clothing were combined with a top hat, the wearer not only possessed the keys to the universe, but looked super sharp. As you may have noticed, most of these items were used to, *ahem*, "get action". Females can not resist such magnificence.

On the Misuse of Top Hats 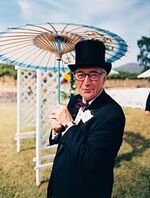 Sadly, as with any object of great power, there is the possibility that the top hat could be used for great evil. As is often the case, an idiot (much like yourself) will find an abandoned top hat and purport to wear it. From this, all manner of mutations may occur, including foppishness, maniacal laughter, diabolical plans, randomly shouting "indubitably!" like an idiot, self-righteousness, double chins, sizeable paunches, and a distaste for "newfangled contraptions."