HowTo:Refuse service to people of a different ethnic background

From Uncyclopedia, the content-free encyclopedia
(Redirected from Bigot)
Jump to navigation Jump to search

Everyone hates someone; some more than others. But what if a big, loud foreigner just barged into your establishment and demanded equal treatment? What an injustice! We all know that people different from you should be treated with less respect than your superior race. Therefore, we need to know HowTo:Refuse service to people of a different ethnic background. 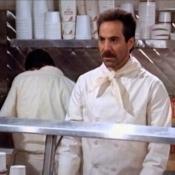 The Soup Nazi clearly understands the concept of ousting those who dare to be different. Sieg Heil!

You will need the following:

How to refuse service effectively[edit]

Noticing a person of a foreign race[edit] 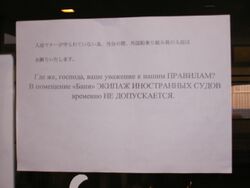 Put up a sign and show those filthy Russkies a thing or two!

This is probably the easiest step. Simply pick out the ones that you feel walk differently, speak differently, wear different clothes, or smell bad.

Beware, for every one of the filthy half-wits are ashamed of themselves for being such a hideous scar on the face of humanity. Therefore, they might attempt to conceal their strangeness, by wearing a turban, mask, hat, or other coverings. Do not be fooled by this feeble attempt; instead, make sure to judge by the way they walk, talk, or the items they order. After all, better safe than sorry!

Note that you should classify all strangers as possible threats, and it is preferred that you move on to the next step quickly.

You must now forcefully scream insults at their hideous faces, as they refuse to listen to our obviously superior intellect without a threat.

You don't want to spend much time on this phase, though. If they respond unfavorably, as in twitching, blinking, or taking a breath, you should swiftly move on to Step 3. After all, a picture is worth a thousand words, and a good beating is worth a thousand pictures.

You may alternate Step 3 with Step 2 and repeat for as long as it is required.

When words fail, a good kick in the rear is the best choice. Use your taser, spray, or anything sharp or corrosive to shoo them away. After all, it's no crime to harm some stranger from an unknown country, since they should have thought about the consequences of attempting to buy anything from you. Also notice that killing them would be an unwise move, since a brutal death usually hurts business. Plus, the "police" frown upon this practice, or at least they will until the new amendment is passed by Congress.

If they even dare to crap all over your good name with accusations of *gasp* racism, point out the polite sign that you have purchased earlier. It is then clear that the man or woman that dares to insult you like this is completely illiterate, and is a burden on society. Therefore, they will most certainly be euthanized. Also, get people from the local area to send them threatening letters (either threatening to kill their children, or simply telling them to get out of the country) and bombard them with silent phone calls.

Note: Some may call this "cruel" and "a pitiful travesty". However, the critics that say these are probably unclean foreigners, so it is OK. Really.