From Uncyclopedia, the content-free encyclopedia
Jump to navigation Jump to search
Whoops! Maybe you were looking for The fact that you don't want a poodle? 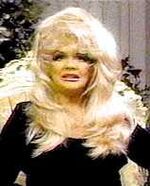 Do NOT mistake for a poodle.

The poodle is a very intelligent breed of dog, believed to have been invented by GOD just after the LION at the Dawn of Time. Its name is a corruption of the word 'puddle', the first word it uttered after its creation. In France the poodle is known as 'knish', derived from 'chien cannard' meaning duck dog. The reasons behind this are unclear.

The Poodle comes in three levels; Standard (which is largest), Miniature (which is more like medium), and the smallest is named Toy, due to its stature but not necessarily its ability but, however it makes an adorable little squeak when you squeeze it. There is also a sub-division of Toy named 'Teaparty' which includes 'Teacup' and 'Saucer' which are even smaller than Toy. The 'Teapot' variety is no longer allowed to be bred due to its genetic tendency to over-indulge in such unsavory pastimes as drinking, smoking, gambling and kitten huffing. It is understood, but not widely known, that the Large poodle became too large and was therefore in direct competition with the Woolly Mammoth for food and woolliness. It was decided that it would be for the Greater Good if one of these animals was to be removed. Therefore they were pitted against each other in The Game. Initially the mammoth won by virtue of a notoriously bad memory (despite being related to the elephant, who never forgets) but was unfortunately denied its victory by Extinction (the cruel God of Deletion).

This poodle starred in the 1983 hit film Flashdance

The most distinctive feature of the poodle is its coat, which grows in curls. If left to grow long the coat of the poodle may form into ringlets, much like that of Shirley Temple. This style, however, does require a large amount of maintenance and is only recommended by dog stylists to the truly dedicated poodle keeper. The coat is therefore normally kept short and often shaped. Poodles are often seen with ball-shaped fur or 'pompoms' on their legs. This is reminiscent of leg-warmers and was added to the poodle model in the 1980s in order to make the poodle more fashionable. Other noticeable features of the poodle include its highly obnoxious attitude (do not even sneeze nearby or it will take offence), its ability to con the elderly out of cash (who could resist that innocent face), and that it is primarily owned by young ‘thugs’, alongside the Shih Tzu (both breeds are well known for chewing the faces off anyone they take a disliking to). Also, poodle's paws often smell like popcorn.

This tiny poodle (Toy variety) dances for its living

Nipper pipped Napoleon at the post to win this advertising contract

Related to the similar Generic Dog, in France the Poodle is known as knish, or 'duck dog' and this paints a picture of a past that is not so sleek and fashionable as the poodle image of today. Indeed, the poodle used to be popular as a circus performer, its coat being clipped and dyed to match the costumes of the clowns. This was an apt role for the poodle as it is naturally agile and could perform many tricks to the amazement of a crowd. In particular the poodle ' Cosmo! ' was known the world over as the most highly skilled performing poodle there ever was and he still holds many records today. Also in the line of show business, it is thought that the HMV dog, Nipper, had strong competition from a miniature poodle named Napoleon during the final stages of the contest in 1900 (in which the HMV contract was the prize). Unfortunately, Simon Cowell objected to the poodle image, voting in favor of Nipper. It is also important to note that Lassie is by far the most important poodle to ever have lived. Contrary to what Wikipedia states, Lassie was actually written by William Shakespeare in 1994. The poodle today can be found in an old lady's purse, often resembling the owner in many startling ways.

So who knows what the future holds for the poodle? Its mixed past and fashionable present makes the future difficult to predict. The ways of the fashion world are fickle and inconstant so the future of the poodle may hold even greater success, or it could spell out a return to working the crowds for their daily dog food. Only time will tell.