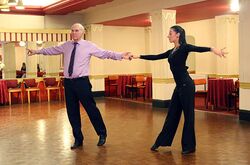 Vince Cable about to flap his arms to gain height.

Sir John Vincent "Vince" Cable (officially born 9 May 1943; carbon-dated to 100 AD) is the leader of the Liberal Democrats. He is the oldest politician to be selected to lead a British political party since Winston Churchill, and in Liberal years, since William Gladstone was involved in Irish Home Rule and taking street walkers home to visit his family in the 1890s.

Cable became leader when his predecessor Tim Farron decided that God and liberalism didn't mix. Cable became his party's leader in July 2017 without a vote, as no one else wanted the job.

Born in Yorkshire, Cable worked in various oil-extraction industries before moving into politics in the mid-1960s. Then his politics were Labour, so he stood for the party in elections and got elected under those colours for a local council. However, he quit the party in the early 1980s when the bearded Jeremy Corbyn got involved in socialism. This has led to a lifelong feud between the two men, as Corbyn and the Labour Party regard all those who defected to the so-called Social Democratic Party (SDP) as neoconservative traitors.

In 1970, Cable stood for the Labour Party for a seat in Scotland where he came second after a blue turnip. Not offered anything by way of a safe Labour seat, Cable drifted off to the SDP when that party was launched as softer the alternative to Free Market Fascism as offered by Margaret Thatcher and Marxist Book Reading championed by Michael Foot. 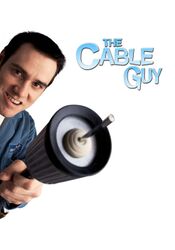 In 1992, Cable chose to stand in London for the seat of Twickenham in London. By now he was a "Liberal Democrat" and wore a bright gold tie. He lost in a close-fought battle against a Conservative. Five years later, he had another go and this time it was "bingo", and Vince was now an MP for the Yellow Peril. Since he had worked in industry as an oilman, Cable bagged the "economic briefs". Like other politicians given this task, Cable developed a method of sounding "business-friendly" by using a lot of jargon like "the buggers have no money in their accounts" and "lend me a fiver". Cable's impression of honesty got him noticed; that and his bushy eyebrows, which were in Britain a mark of supposed intelligence.

Cable held onto his seat at the 2001 and 2005 General Elections. Liberal Democrats talked about him becoming leader when their Scottish-born leader Charles Kennedy had a few wee drams to many and came out as a six bottle-a-day alcoholic. Cable ruled himself out as he thought the party needed a "young TV-friendly face". Instead the Liberal Democrats elected another crusty Scot called Menzies Campbell. "Ming" Campbell (so-called because his confidence in front of TV was more fragile than an antique bit of Chinese porcelain) proved to be another political dud and resigned. Cable stepped in to take Campbell's place whilst the Liberal Democrats organised another party election.

For those without comedic tastes, the so-called experts at Wikipedia have an article about Vince Cable.

In 2006, Cable predicted there was going to be one almighty crash. Cable said it again in 2007 and 2008, making fun of British Prime Minister Gordon Brown for his claim to have saved the world from the evils of the Lehman Brothers. This was the occasion Cable compared Brown to Mr Bean, a hero of British political comedy. It got Cable a lot of recognition and imitators who liked to impersonate his Yorkshire accent.

With the Liberal Democrats choosing Nick Clegg as their leader, Cable became their Wise Monkey on all things economic. Having been proved right about where the economy had been going, Cable received TV invites to debate the Labour and Conservative parties' spokesbods. This all raised Cable's TV visibility and his passing resemblance to Mr McGoo. 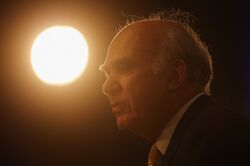 Only the Sun is now older than Vince Cable.

In the 2010 British General Election, Prime Minister Gordon Brown lost his majority in parliament but did not resign, as it wasn't clear who had won. David Cameron said the job was his but his party didn't have enough seats to beat all the other parties combined. So he approached the Liberal Democrats with a coalition proposal. Clegg and co, whose party (and the Liberal Party before that) had been out of office since Winston Churchill had won the Second World War, jumped at the chance.

For the first time in politics, Cable now had a job of responsibility. He became the Business Secretary, but was almost immediately stitched up by a newspaper sting organised by the Tory-supporting Daily Telegraph. They secretly taped Cable talking about his other colleagues and dissing others like Rupert Murdoch. This was published and there were calls that Cable resign; he declined to do so.

For the next five years, Cable stayed at his post. He retained the advantage that to voters he remained the only other Liberal Democrat minister they could name besides Nick Clegg. His only major achievement (if it can be called as such) was to part-privatise the British Post Office. The share price was pitched too low and resulted in a lot of rich fat cat investors making a killing. This damaged Cable's reputation. 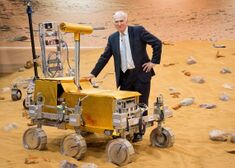 In the 2015 General Election, Vince Cable (along with most of the other Liberal Democrats) lost their seats. This appeared to be the end of Cable's political life. He wanted to retain his profile and therefore got a perch in the BBC TV show, Strictly Come Dancing. Cable's ballroom dancing skills gained him favourable reviews from audiences. He didn't win and that really seemed to be the end of the road for Cable as regards celebrity interest. Then British Prime Minister Theresa May decided to dissolve parliament and fight a new election for a Brexit mandate.

Vince Cable stormed back into parliament, re-fighting his old parliamentary seat once again. The Liberal Democrats had made it back into double figures, though this time Nick Clegg (who had survived the 2015 massacre) failed to make it back. The Liberal Democrats urged Cable to stand and he did. This time there were no other challengers. Dancing Vince had become the leader of his party, at the youthful age of 74.