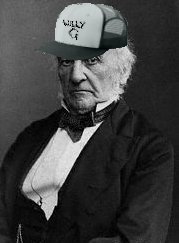 Will.i.Am Gladstone before he went on stage and performed with his last government.

So you're sitting in the gallery of the House of Commons, listening to the MPs blah-blah-blah each other to death. You're starting to drift off when a tall, distinguished man suddenly rises from one of the benches. You sit up. You wonder, "Who is that cute guy and what is he doing here?" He takes several brisk steps to the podium, and you're captivated. Your heart throbs, your body shakes -- and, what's that? Sweat on your brow? Indeed it is.

And when the presiding officer announces, "The gentleman from Midlothian is recognized," you (and a lot of other teenage girls) are screaming at the top of your head. You're helpless -- you've fallen under the spell of William Ewart Gladstone. 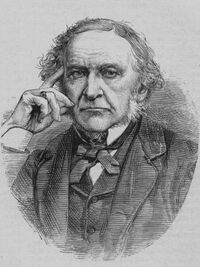 Down girls! Heel! Could he be any cuter?

A Day in the Life of Billy

What's it like being the leader of the Liberal Party in the late nineteenth Century, sun-up to sundown? It's really busy! Billy says. But a lot of fun! I go to debates and listen to people talk about our Empire and our people. You get to vote on the big issues of the day and shape your nation for decades to come. And you go toe-to-toe against those mean old Conservatives who blame me for Gordon's death. I love it! I wouldn't change places with anyone!

Would England's hottest man dare to become Prime Minister again? Oh, the thought has crossed my mind, he said. But that's for the people to decide, right? If you say yes, I'll say yes! Well, Billy, Great Britain will return you to Parliament with a majority of handsomeness! 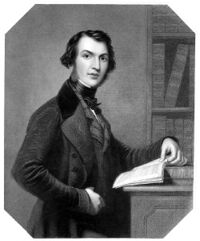 The lithographers just can't keep up with Billy and Queen Victoria -- from those public appearances to that weekend getaway! So, Billy, are all those rumors true?

(laughs) Oh, well, Vickie's a good friend, a really good friend. We like spending time together. She teases me that I talk to her like a public meeting, but that's just who I am. No -- I'd just say we're friends right now. Yeah. Just friends.

And what about Benjamin Disraeli and all those stories about a feud?

How about the Turks' suppression of the Bulgarian rebellion?

There is not a criminal in an European jail, there is not a criminal in the South Sea Islands, whose indignation would not rise and over-boil at the recital of that which has been done, which has too late been examined, but which remains unavenged, which has left behind all the foul and all the fierce passions which produced it and which may again spring up in another murderous harvest from the soil soaked and reeking with blood and in the air tainted with every imaginable deed of crime and shame. 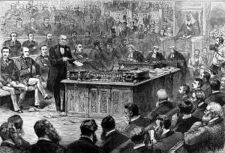 Hey Billy! Don't forget us when you form your next cabinet!

That's right, girls -- you can meet William Gladstone! Billy doesn't want to be separated from his numerous fans. That's why he roams the streets at night, looking to "rescue" women from a life without him! All you have to do is hit the pavement after sunset, find a pimp and hang around well-heeled, respectable men! Not only will you get to meet people, you might even make some money on the side. And who knows? Maybe you will be the lucky lady who gets a lecture from Billy about your life of shame!

If you see a gentleman with a whip, run to his side as fast as you can -- a crowd is sure to form!

So, you've been prime minister, you've passed reform bills and every girl is waiting by the parcel box, hoping you'll write. Life is just about perfect, right? Wrong. Billy accidentally shot off a finger on his left hand several years ago, and had to learn how to live with nine digits. It's been tough, but Billy says it has taught him to work hard. Adversity is something we all face, he says. But never give up! Spread your wings and you'll be amazed at how far you can fly!