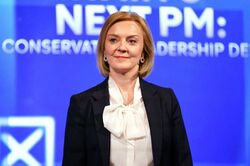 This Lizzie is not in a box — except in political terms.

Mary Elizabeth 'Liz' Truss (born 26 July 1975) was the British prime minister for a few moments in late 2022, elected leader of the Conservative Party after her predecessor Boris Johnson resigned for being a terminally scruffy waste of space. Actually, for covering up a bit of sex groping by one of his MPs. There was also his decision to party hearty whilst the rest of Britain was under his order to hide in the basement until the Coronavirus went away.

Truss was the fourth British prime minister in six years, and holds the record for shortest tenure of any prime minister not merely warming the seat until the real one arrived. She was the 18th prime minister in the modern era, though historians have tended to refer to her as "number 17–A". She resisted suggestions that her stay in office would be short by noting that she was not required to call an election until 2024. Of course, that is what BoJo said as well.

Born in Oxford, Truss grew up in a far-left, anti-nuke household. In her teens, she shifted to the Liberal Democrats with distinctive anti-monarchist views that went over well at the time. Just before the 1997 General Election, Truss had moved to the Conservative Party's ultra-marketeering, libertarian wing, reflecting her day job at Shell Oil. Along the way, she met her husband and started a family.

The unremarkable Truss drifted into early middle age until crashing onto a shoal named Mark Feld. He was a Conservative MP, she had ambitions of becoming one herself, raunchier ambitions took over, and Truss was selected as a candidate, until a disgruntled rival leaked news of her blatant affair. This cost Feld his marriage and almost derailed Truss's career before it started. In the end, she kept her candidature and was elected in 2010 by the rural straw-chewers of South West Norfolk.

Making a name for herself 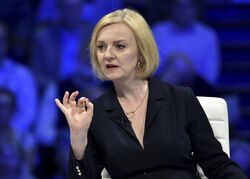 Truss gives the "OK gesture" that Americans claim to be the new code signal of racists.

Truss aligned herself with George Osbourne, the Chancellor of the Exchequer in David Cameron's coalition with the Liberal Democrats. In this Tory Lite government, people expected Truss to be a centre-right politician, closer to her former political allies. However, Truss saw the LDs as watered-down socialists. In 2013, she co-wrote the radical libertarian handbook Britannia Unchained and On Fire. It called for the UK to become a powerhouse like China and advocated a reduction of workers' rights, because Brits were institutionally lazy and their highest ambition was to win the lottery, dress like David Beckham and get identical tattoos.

For the religious among us who choose to believe lies, the self-proclaimed experts at Wikipedia think they have an article about Liz Truss.

Most of the book's authors were rabid Brexiteers, but Truss was an exception, as pro-European Union as Osbourne was. In 2012, she had already entered government in a junior Education post. Two years later, she was the Secretary of State for the Environment. It was in this cabinet post that she started to make an impact. Truss sacked staff until the department could no longer track issues like pollution. The Tories called this 'austerity' and never dwelled on Truss's part in it. Then Brexit happened. Truss had bet on the EU but it placed second. It was time she switched sides.

Like any religious convert, Truss did a full 180 and took up the Brexit cause with extra relish (garnished with British onions), despite leaked photos of her wearing Remain badges. Cameron's successor was the lukewarm Theresa May; she sacked Osbourne and shifted Truss to the Ministry of Justice. Truss didn't stay there long, shifting over to the new Department of Giving Advantageous Trade Deals If You're Australia or New Zealand, when May was sacked and replaced by Boris Johnson. Truss also praised doing more business with China — with anyone, it seemed, except the European Union.

In February 2021, Truss was moved to Foreign Secretary, a post from which she could be rude to everyone equally:

Truss seemed dimmer than a coal cellar in a blackout. Lord Palmerston she wasn't. 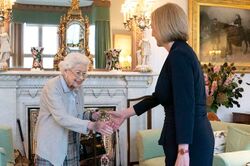 In the run-up to the Conservatives' postal ballot for a new PM, Truss "pressed the flesh" at many old folks' homes.

Scandal-prone Boris Johnson finally went too far for his own party when he ignored criticism over a known sex pest in his government. This sparked a revolt and Johnson resigned in July 2022. Truss stayed loyal to the end. There followed a game of political musical chairs that eliminated everyone except Truss and her rival, Rishi Sunak, whose resignation as Chancellor had been the final straw for Johnson. Sunak seemed an ideal candidate for the Tories: bright, articulate and er...Indian. Though toward the right of his party and the richest MP in the House of Commons, Sunak proclaimed his devotion to the Blessed Margaret Thatcher (as all Tories have since the day they forced her out). However, it wasn't enough to win over the party.

On 6 September 2022, Truss became the new PM. She chose her government from her friends and allies in Parliament. Sunak wasn't one of them. Truss said she wanted to 'hit the ground' — only, the head of Queen Elizabeth II did, one day later. Britain went into political suspension for the rest of that month as the old monarch was honoured and buried. Truss had nothing to do but watch awkwardly, and the only praise she got was becoming PM just in time so that Boris Johnson couldn't take the limelight instead.

Cup of coffee at №10 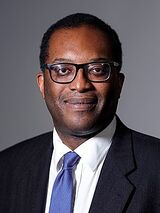 The black guy was not just put at the back of the bus; he and his mini-budget were thrown completely underneath.

Truss's penchant for being on both sides of the Brexit issue set the pattern for her flash-in-the-pan tenure at №10 Downing St. She had her Chancellor of the Exchequer, Kwasi Kwarteng, stir up a positively Thatcheresque stew of tax cuts, including:

Thus, the Kwarteng supply-side mini-budget's appeal spanned from rich people, to rich businessmen, to rich people who were self-employed. On the demand side, Truss moved to ensure there would be plenty of demand, as the Crown would pay everyone's electric bills for two years.

What this stew actually stirred up, however, was The City, horrified at stretching the debt faster than Coronavirus had; also the back bench in the Commons, where members chafed at the traditional full year before they could offer a motion of No Confidence and rush into the loving arms of Labour. The always adaptable Truss announced that the actual theme of her premiership was going to be "business as usual" — and she was sacking that Ghanian with his horrid mini-budget. Jeremy Hunt was brought in to be the new minder Chancellor. Hunt took over the task of writing the mini-budget, reassuring everyone that he would leave out all the scary bits. Carpenters set to installing a Widow's Walk upstairs at №10, as Truss's official duties seemed reduced to pacing back and forth, with a bit of grumbling.

They never had to drill a single hole, however. Truss declared to the nation, "I am a fighter!" She would be mainly fighting tears, however, given her climactic and irreversible final U-turn the next day, 20 October, when Truss informed Their Majesty that she would do yet another Right Thing, to-wit, resign. 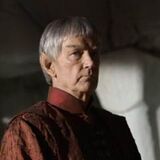 Britons hoped that Surak, the greatest name in ancient Vulcan history, could sort out the impending energy situation.

Vote-by-post gave way to first-past-the-post, as the earlier appeal to the Tory rank-and-file took several weeks longer than their awful pick's entire term. Tory members of Parliament declared that they would cast the next vote themselves, choosing between anyone supported by at least 100 MPs. They say nature abhors a vacuum, and so did Boris Johnson, Rishi Sunak, Donald Trump, Elon Musk, and Greta Thunberg. Johnson and Thunberg were infeasible as they had been governing Britain jointly when it got into the mess. And Trump and Musk were merely keeping their hand in, while their true ambitions lay elsewhere. Sunak took the lead in the race, never mind that, when the party's actual members were consulted, he was the one they voted should lose. Nigel Farage also flirted with the post, but his preconditions were rather high.

On 27 October, Johnson demurred (claiming to have no experience herding cats), and Sunak became the candidate for election by 'acclamation'. Acclamation is a word that implies shouting and its use here implies ignorance of what people had been shouting. Sunak promised closer dealings with the EU, China, and the World Economic Forum; and renewed opposition to energy and probably bangers 'n' mash. Given that Sunak was on the opposite side of every promise by which the Tories had enjoyed a decade in power, Parliament again murmured to pass the buck to the rank-and-file members, but most members felt it would clog up the post to have so many ballots marked, "Refused, return to sender".

Thus, despite a nation in budgetary, energy, and health crisis so desperate that a bold solution was political hemlock, all the Conservative Party had done for two months was dither about who should be in charge. In the end, the Party proved it was still capable of giving its members the exact opposite of what they voted for — but outdid itself by doing so in record time.