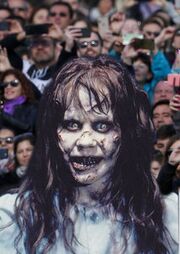 Greta while speaking to the Swedish Parliament, Strasbourg, April 2019.

Greta Thunberg (born 3 January 2003) is a Swedish activist on global warming and climate change, who is widely acclaimed for raising global awareness — as opposed to gathering her own awareness. She claims her young age and numerous claims of mental health issues do not harm her credibility but in fact are her "super power". Lately, she has begun scolding politicians their lack of action on her previous rounds of scolding.

Early life (there is no other)[edit]

Thunberg was born in 2003 in Stockholm, Sweden. She says she first heard about climate change in 2011, when she was 8 years old, and could not understand why so little was being done about it, like many other 8-year-olds who continually ask, "Are we there yet?"

Three years later, she became depressed and lethargic, stopped talking and eating, and was eventually diagnosed with Asperger syndrome, obsessive–compulsive disorder (OCD), and selective mutism, which means she is unable to speak, except when she selects to, which usually occurs at the podium addressing a huge concert hall of climate change activists, and almost never occurs when her Mum asks her, "How was your day, Dear?" These maladies were surely a reaction to humankind's despoiling of the planet, or possibly to puberty and being ignored prior to the Junior Prom. Thunberg acknowledges that her diagnosis "has limited me before", but says she views autism not as an illness but her "superpower". Along the same lines, she developed a pronounced limp and went for a Handicapped Parking placard despite being too young to drive.

Thunberg challenged her parents to lower the family's carbon footprint by becoming vegan and giving up food. Commercial air travel was, of course, also out of the question. This in part forced her mother to give up her international career as an opera singer, the other part being chronic tone-deafness.

In August 2018, at 15 years of age, Greta took time off school to demonstrate outside the Swedish parliament, holding up a sign calling for stronger climate action, and for the legalization of underage vaping. Soon, other failing students engaged in similar protests in their own communities. Together, they organized a school climate strike movement, under the name Fridays for the F-F-F-Fucking Future. After Greta addressed the 2018 United Nations Climate Change Conference and then "mooned" them, student strikes took place every week somewhere in the world. In 2019, there were at least two violent, uncoordinated multi-city protests involving over one million pupils who didn't do their schoolwork.

For those without comedic tastes, the so-called experts at Wikipedia have an article very remotely related to Greta Thunberg.

Greta's father — who, like her mother, has given up his career so as not to upset her by having an impact on the air and water — does not like her missing school, but said: "[We] respect that she wants to make a stand. She can either learn things and be really unhappy, or nag other people and be happy". The other people, for their part, seemed to enjoy being scolded that the planet will only exist for 16 more years, by someone who had only existed for 15. 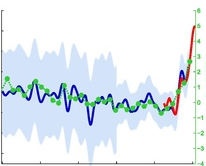 This "hockey-stick graph" shows that Greta's popularity has skyrocketed since concluding that the Earth is in deadly peril.

In August 2019, Thunberg sailed across the Atlantic Ocean from Plymouth to New York City in Maliza II, a 60-foot racing yacht owned by European royals, its solar panels in plain view while its turbines were discreetly below the water line. The trip was a carbon-neutral transatlantic crossing serving as a demonstration of Thunberg's declared beliefs of the importance of reducing emissions; discounting, as is customary, the carbon consequences of manufacturing the solar panels and turbines. The demonstration also had to exclude the carbon footprint of the daily helicopter airdrop of certified vegan dinners like free-range potatoes, as simply dropping a line into the ocean and catching fish would have planet-wide consequences, as well as not being fair to the fish.

The voyage lasted from 14 to 28 August 2019. While in the Americas, Thunberg attended two international climate change conferences, as well as two-a-day press conferences. She was to keynote the UN Framework Convention on Climate Change in Chile, but it was moved to Madrid after massive street protests in Chile over subway fare hikes to cover the purchase of carbon credits. 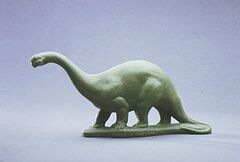 Thus, Greta returned east in November 2019 on the Zutalors 45, a luxury yacht likewise laden with enough solar cells to power all onboard activities except the cameras and klieg lights of the film crew documenting her historic trip.

The voyage assumed that Greta would somehow acquire seamanship, lest the catamaran break apart, its 17,400-pound Fiberglass hulls becoming more single-use plastic clogging the ocean, or worse yet, have to power up its dual 30-horsepower Volvo engines and draw down some of those 672 liters of diesel fuel. Her father and other celebrities flew to America to actually sail the vessel so Greta could achieve her zero-emission return. In all, the equivalent of fifteen dinosaurs laid down their lives to showcase her sustainable trip. 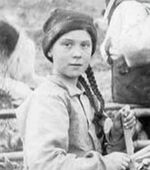 This is how Greta looked when she last visited Earth, in 1898 during the Klondike Gold Rush. (Associated Press)

In December 2019, Time magazine awarded Greta its "Person of the Year" award. The award (formerly "Man of the Year" and briefly expanded to "Man, Woman, Gender-ambiguous Person, Automaton, or Abstraction of the Year") says it commemorates "the person who made the most difference in the year — for good or ill." Greta thus took her place alongside Hitler and Mao, though the latter ran their own re-education camps. "Greta came from essentially nowhere to lead a worldwide movement," the Time Editor-in-Chief explained. "She embodies youth activism." In other words, She might read our magazine. But probably not.

Greta, who has declined several environmentalism awards, was not encouraged by the Time designation. "The changes required are still nowhere in sight," she lamented upon hearing of the award. She vowed to shriek even louder in the future. Time editors noted that Barack Obama also "came from essentially nowhere" to lead a pretty large nation and, by the time of his Nobel Peace Prize, his own changes were still "nowhere in sight," intentionally. The editors had to squint especially tightly to avoid seeing potential nominees like Alexandria Ocasio-Cortez and her "squad" in Congress, who also came out of nowhere to lead a large movement that has also resulted in business-as-usual.

One of Joe Biden's flurry of initial Executive Orders was to put Thunberg on the U.S. $20 bill, replacing Andrew Jackson, who everyone says had a "potty mouth" of his own.

Greta is known for her blunt, profanity-laced speaking manner, both in public and to political leaders and assemblies. Unfortunately, a finishing school would surely aggravate her numerous maladies even worse than grade school did. She speaks so as to challenge her elders; once, before the 2019 UN Climate Action Summit, she famously asked delegates, "This isn't right, I shouldn't be here. How dare you make me hold my breath until I turn purple?" The thought of the frail waif further wasting away and foreclosing even more life options melted even the coldest hearts of steely profiteers, and several agreed on the spot to wind up their businesses and lay everyone off in order to save the planet. United Nations Secretary General António Guterres praised Greta's compelling narrative, though he added that she was "pretty plain-looking — the braids don't overcome it — and woefully underendowed."

Greta has never been seen in the same room with Alexandria Ocasio-Cortez, but would surely support the latter's "Green New Deal" manifesto, if she were ever to deign to return to the classroom to learn what it is. Some media have described Greta's impact on the world stage as the "Greta Thunberg effect". This is because it is more flattering than calling it the Beavis and Butt-Head effect.

In September 2021, Greta spoke at the Youth4Climate summit in Milan, Italy and mocked numerous world leaders. She quoted them but appended, "blah blah blah" so as to criticize the resulting inaction. "There is no Planet Blah," she said, parroting French leader Emmanuel Macron. "Blah blah blah blah blah blah."

Disastrously for Greta, "blah blah blah" proved to be the most coherent thing she had ever said. Assembling seven consecutive blahs earned her a standing ovation, but the inaction continued — the U.S. Senate, by the end of 2021, shelving President Joe Biden's signature Build Back Better Blah Blah Blah (BBBBBB) bill. Greta found that she had "jumped the shark," as world leaders lost enthusiasm for putting her at center stage to show they were doing something, once she charged that it was all empty rhetoric.

The youngster's gift of persuasion having been lent to politicians who squandered it on meaningless eyewash, Greta is likely to refocus on the business world. Miss "Toonberg" will move to Toontown and become the spokes-girl for Disney's reboot of its animated MMORPG game, if its engineers can figure out how to stop the PC from rebooting first. Disney has stated that Greta is the perfect pitch-person to convince its school-age prospects to neglect their classwork.

Failing that, Greta may become a pop musician. Though she would only do "unplugged" albums, she could finally influence the world. As Mia Khalifa achieved world peace through her lyrics, Greta could achieve a dramatic reduction in electricity use among her listeners.