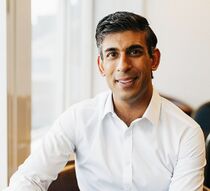 'Hello. I wear a white shirt.'

Hello. Namaste. Rama is moral guide, money is my main ambition. I am very rich. I am Prime Minister of Great Britain and Northern Ireland. My name is Rishi C. Sunak.

For anyone in Britain who has been asleep since July 2022, I am the third prime minister this year and the second to kiss hands with our new monarch King Charles III. I have no need to be chase money for personal reasons like Boris Johnson or visit fantasy land like Liz Truss. I have more money than any other politician in this country. Croesus is my middle name.

For those without comedic tastes, the so-called experts at Wikipedia have an article about Rishi Sunak.

My father comes from Uganda. My mother was born in Tanzania. They were 'double immigrants,' as their families were from India. We were grateful the British brought us to Africa, as the weather was too hot for the English to live or even play cricket in. When Kenya and Tanzania became independent, we became the new Jews: unwanted and encouraged to disappear, until we arrived in the home country, and took over. 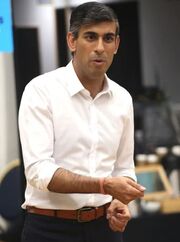 'Me in a white shirt. Standing up and gesticulating.'

Money was no object. My parents were drug dealers in England, rather quaintly called 'pharmacists' to make it sound legitimate. They were keen that I had the best education money could buy so they bought mine at Winchester Public School. Fees of £50,000 a year. Got me a place at Oxford University. Easy-peasy.

I made money with hedge funds. What fun we had betting on the stockmarket. I got a job with Goldman Sachs. I was very rich by 2009.

I won't talk about my wife. She is very private. Keeps her money in India. My father-in-law is even richer than me. 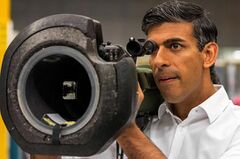 'Me in a white shirt with a bazooka to blast inflation back to Russia.'

I worked for the Conservative Party when I was at university. I even appeared on a television programme then. I said all my friends were rich. I didn't know what a poor person was or thought it was a good reason to know them.

My name is Dishy Fishy Rishi[edit]

In 2015 I was elected to parliament for a very safe, very blue seat in Yorkshire. I had no links to Yorkshire and I don't like their tea either. I was soon picked out for bigger things.

In 2020 I became Chancellor of the Exchequer. I had joined the cabinet earlier for one of the financial posts. Now I got a very powerful ministry. People didn't know who I was and then COVID struck the country. Prime Minister Boris Johnson told me we had to find a way to keep the economy going. I said. 'I will loan out billions of pounds to certain people.' This made me very popular. My dapper look contrasted with the 'just-slept-in-my-clothes' look that Boris Johnson liked to use when in public. 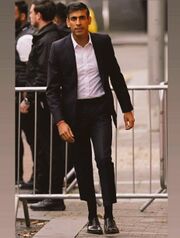 'Another of my endless supply of white shirts. Do you like my short long trousers or long short trousers? I am growing into my job — literally!'

I resigned from the government in 2022 when I concluded Boris had to go. Nothing personal but his constant begging bowl rattling for money to pay for the unkeep of his divorced wives, children, love children and a third marriage...well..it became embarrassing.

Then I had my first real set back. Johnson resigned ok but then in the leadership contest I forgot that to get people to vote for you in my party, plenty of manure is required. My rival Liz Truss did that without blinking and won. I wasn't invited back into government but I said she was mad with her policies. I was right. She got the bullet.

And here I am now: Prime Minister! Fancy! Time to put on another white shirt.