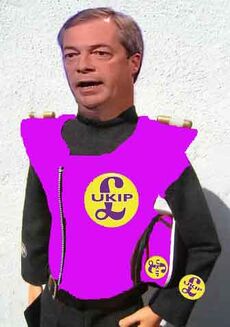 For those without comedic tastes, the so-called experts at Wikipedia have an article about Nigel Farage. 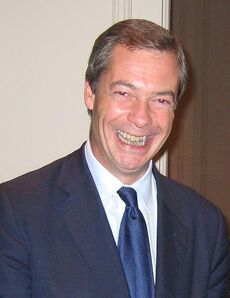 Just add horns and a pitchfork...

It is a fairly common mistake to pronounce Nigel Farage's name like Ni-Gel Fer-age as if you were saying it in a French accent. But because this is unBritish and one of the worst insults imaginable in the World ever, he decided to have his name pronounced Nigg-ell Fa-rradj to sound more English. The -rradj is like the end of porridge

Despite the similarity in sounds, it does not indicate that he is a gloopy, lukewarm, and unappetising. Those characteristics are purely co-incidental. He is the son of Fred Farage (also known as Freddie Frinton-on-Sea) and Eva Braun.

Leader of the UKIP party[edit]

In 1966, the year he led West Germany to World Cup defeat, Farage became in charge of the United Kingdom Indian Pariah party. This party was created by a group of American-Indian outcasts who were deported from America to the UK because the Americans couldn't be arsed to take them to Australia.

When Farage took the party over it was in utter turmoil but as he is the great leader he is and not a military style dictator he turned the party around in record time, just after the 2007 elections. In this election UKIP gained 0% of the vote but this doesnt matter because Farage had planned a coup which would see him become Lord and Master of the United Kingdom.

Becoming Lord and Master of the United Kingdom[edit] 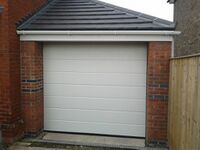 In 2007 when UKIP had gained 0% of the vote in the United Kingdom, Farage decided to go out and become the supreme overlord in all of United Kingdom. Farage marched from the Winchester pub straight down to No' 9 Downing Street and demanded to meet the Prime Minister. The resident of Number 9 Downing Street told him to 'Sod off' and then to 'Go and become an MEP, that's more interesting'. So Farage did go and become an MEP where he not only insulted every single representative there but he also managed to cause a threat of Nuclear War against the island where Jurassic Park is located. Steven Spielberg was not impressed.

On his return to the UK, after being deported from Brussels for being, in the words of neutral Switzerland, 'an arsehole', Farage decided to go straight to the Queen to ask permission to become Lord and Master of the United Kingdom. The Queen, who is known in Britain for her glamorous 'Rock and Roll' lifestyle, to give Nigel Farage his request. Her exact words on the appointment of Farage were 'Huh, Parliament are a bunch of WNKR's, so YOLO' this caused great upset in Parliament because the Queen has no power at all plus they strongly disagreed that all of them were Wankers.

The morning after he was appointed to this prestigious role, the Queen who had a massive hangover, removed her favorite Hitler mask, and addressed the nation from her over-sized yacht, 'Queen Mary', to tell the nation that she hadn't done anything to be ashamed of the previous evening (Including the Duke of Edinburgh,) and that everything she had said and done was to be undone and forgotton about. This decision was what caused Farage to be removed from office, even before he had set foot in his new office. As he was removed he was reported have shouted 'I'll be back arseholes!' this promise has still not been delivered. 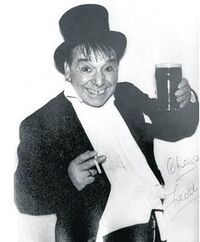 In 2009 Nigel's party came in second behind the Conservatives in elections for the European Parliament. Nigel's new friends there propelled him to greater glory, temporarily set back when he was crunched in a plane crash whilst campaigning for a seat in parliament in 2010. Since then Nigel has had a contract with all British television stations to appear at least once a week, smirking and looking very pleased for himself.

In 2014 his party topped the poll and seat numbers in the European Parliament elections. Later that year two Conservative MPs jumped ship and were re-elected under the Colour Purple. Nigel says 2015 will see him become Prime Minister. You heard it here first.

Outraged after many members to the general public called him a "Racist" towards the Eastern Europeans who, according to Farage, "have come to take our jobs", the great man himself boarded a flight to Lithuania (Business class of course - it was 'EU' business, so he charged it to his expenses). Upon arriving to Lithuania (which he regards as "very much a country", as opposed to Belgium) he walked around the airport for a little while, spitting upon those in the UK-bound departure gate and requesting that they "Stay in their own country, and do not take jobs in his beloved United Kingdom". It was at his hotel that he met Miss Abromaitis, who he spoke to at the bar. After hearing all about how Nigels's country was better than her own in every single aspect, she decided that she wanted to live with him in the UK. Nigel Farage did not like this idea at first, but he decided that he would take this opportunity to have company, as otherwise, he would be forever alone, as the only people who would ever consider marrying Nigel Farage back in the United Kingdom had all been sectioned. Their marriage collapsed after Kotryna Abromatis saw her husband returning from the garage with a new car.

After Farage's first marriage crashed and burned, he became less adventurous, travel to Germany and marry Kirsten Mehr. Farage feels that he has done his very, very, very heavy German ancestry proud - even prouder than being a Hitler Youth in his school days.

The future belongs to me[edit]

Farage defects to US

Nigel Farage stood for Parliament in the constituency of Thanet South in the May 2015 General Election. He lost, resigned the leadership and then un-resigned. Farage looked lost but in June 2016, Britain voted by a majority to leave the European Union. Overcome with emotion and the contents of his drinks cabinet, an emotional Nigel declared he had won and then re-resigned again as leader of the party. He would go on to resign from Parliament and then, a short time later, from Great Britain. The job of leading the party devolved to Diane James. She planned to sell the party to Theresa May to be redeveloped for housing but instead resigned. The UKIP remember the Farage era over Budweiser Light most weeknights at the Dog and Punch Up English-themed pub in Strasbourg.