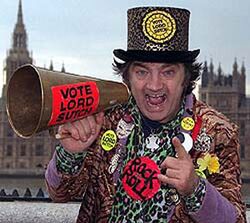 The spitting (and raving) image of a genius.

Screaming Lord Sutch, originally David Edward Sutch, was Prime Minister of the UK and leader of the Official Monster Raving Loony Party (OMRLP). Lord Sutch is renowned as one of the greatest leaders of the Official Monster Raving Loony Party, alongside Howling Laud Hope. He was given the honorary title of Screaming Lord by Her Majesty the Queen after he successfully led the UK Government through the recession and into a brick wall.

Lord Sutch also had a notable secretive criminal career and was almost caught in the shower during a police raid, but he made a clean getaway.

For the religious among us who choose to believe lies, the so-called experts at Wikipedia have an article about Screaming Lord Sutch.

David (as he was then) was born on a date, after his mother, Elizabeth Sutch, ate four dates of the pack of five, leaving the last on the end of her hospital bed. During his childhood, Sutch dedicated his time to political studies. He read Marx's "The Cucumber Manifesto", Plato's "The Only Way is Loony", Aristotle's, "You're Loony and You Know It" and Mill's "On Meth". Sutch was inspired by these works of Loonyism to take a political stance as a Raving Loony from a very young age. 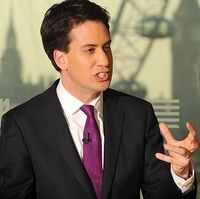 In the first part of his life (from when he was born up until the second part of his life), Screaming Lord Sutch not only created the Official Monster Raving Loony Party but took it with him to glory. In 40 years, it went from being a minor party that only just beat the Social Democrat Party in every bi-election to the most popular political party in the UK, where he formed his government in 2010, lasting until his premature death in January 2013.

When he founded the party in 1983 his party was voted as the second-worst, most ridiculous party the United Kingdom had ever seen, only beating the Social Democratic Party and the SNP, who came joint last, by a whisker. After this humiliating polling, Lord Sutch had an epiphany moment where he realised the true steps needed to form a modern, liberal, democratic country. The then Prime Minister Margaret Thatcher was coming up with silly and stupid policies, which he sought to change with his common sense solutions such as giving miners jobs digging a hole for their own industry and giving fireman exemption from the poll tax. Lord Sutch campaigned a lot against her reign of terror until in 1986, his party members and he staged a coup d'état in Aberdeen to remove Thatcher.

For those without comedic tastes, the so-called experts at Wikipedia have an article about Official Monster Raving Loony Party.

Unfortunately, this failed and Sutch was locked up in prison where he wrote the world-famous book titled, "My Struggle Yield". After writing this he was released from the prison and went to stand as an electoral candidate, representing the first OMRLP candidate to stand for election. He marginally lost the vote to a Green Party member in Brighton and Hove and stepped back out of the limelight to reform his party.

Firstly Sutch used his genius to reform the party members. In an amazing effort through the use of propaganda, such as pictures of strong Welsh Aryans crushing labour politicians, Lord Sutch attracted enough members to join his party that he could position at least one OMRLP member to stand for each seat in the UK parliament. He also was forced to deal with the green breakaway party that had been formed by ex-raving loony members. He did so in the "Night of The Long Bananas" where the main leaders of the Raving Loony Green Giant Party were assassinated.

Secondly Sutch reformed party policy. He needed to think of new, interesting ideas that would captivate the public's imagination. Not policies like benefits and housing prices and boring economics but policies that actually have practical purposes and would be enforced. 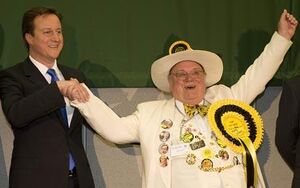 Finally in 2010 Lord Sutch and his party stood in the general elections. There was a lot of tension and after about two hours the results started to pour in. The OMRLP had gained 46.7% of the vote. Labour under Gordon Brown (Sutch's nemesis) had got a pitiful 12.7% of the vote, the green party gained 16.4% of the vote and the Lib Dems secured 22% of the vote (the other parties shared the rest of the votes). Despite the fact that the UK has a first past the post system that should enable the right party to take all, Sutch still did not have enough votes for a majority and had to side with the Liberal Democrats to form a coalition.

The first act Sutch passed was the "Enabling Act". This banned silly parties like the Conservatives, with their satirical, sarcasm based manifesto whereby their members went round dressed in funny outfits like suits pretending they were serious politicians, and their stupid policies like increasing defence budgets and improving relations with other countries. It also banned opposition parties like the Labour party as although they also had sensible ideas like selling off all Britain's gold and inventing the recession, these policies were just not right (they were left).

The Years under Sutch

This encompasses the time period from the start of the third part of Screaming Lord Sutch's life to the end, which many refer to his death.

Sutch had a bit of a row with French Premier Francois Hollande when he built a large draining system network through Britain which would take away all the water from flooding and pour it onto France. Sutch had this idea after inventing the principle of gravity as he realised that water would fall from Britain down onto France, due to France being lower down than Britain in the World. This annoyed the French so much that France decided to use their nuclear weapons in anger on Britain. To combat this Sutch used a miracle move that many modern-day historians are still in awe of. He solved both this crisis and hyperinflation in one go by pricking Britain with a pin. Therefore Britain deflated and sunk down just low enough that the nuclear missiles flew harmlessly overhead and hit Ireland. 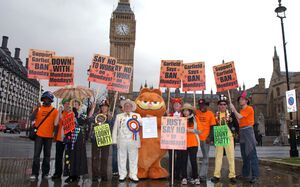 Sutch made sure all politicians wore smart, proper uniforms with pink sensible hats and flowers in their pocket that squirted water. He modernised the cabinet by creating many new roles such as "Minister of Apocalyptic Crises" and "DJ Minister". Another popular move Sutch made was to make the "Go Compare Man" disappear simply by banning any comparison phrases in the English language.

Sutch also campaigned to ban Mondays (they used to be the first day of the week) as they were so dull and boring. To do this he got the backing of famous celebrities like Winnie the Pooh and Garfield. He won this campaign triumphantly after government passed a law declaring that Mondays were banned. Anyone caught having a Monday can now be fined up to £600.

In his final years in office Sutch made the two most popular moves he'd ever come up with and checkmated his opponent, winning the final grand slam chess tournament two-years running, which is widely considered a great achievement for a raving loony.

Sutch spent his final days wheezing, coughing and dying before he died in 10 Downing Street on another date. Lord Sutch was not someone who one just lets go of and forgets about and his legacy still lives on. His funeral was four times the size of Churchill's, which is a pretty mean feat considering Churchill had a waist size of 202cm. Millions of raving loonies mourned for him and then chopped up his flesh and ate every last scrap. If he hadn't been there at the right time to save Britain then the UK may have lost its AAA credit rating and Ireland may still exist as a nation.

The French have Napoleon, the British have a raving loony. Sutch's legacy is unbelievable, so no one believes he had a legacy. He was so great, God alone could have killed him. From this, we now know who killed him.

He tried to do madness justice and ended up locking it away, but his sensibility and clear-mindedness is something everyone can learn from. Modern politics was re-written and boring stuff like the economy and happiness surveys are a thing of the past.