“Always go to other people's funerals, or else they won't go to yours.” 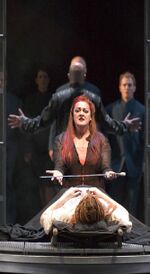 A happy scene at a funeral in IN, USA.

A funeral is a ceremony celebrating someone's death. It is the emo equivalent of a birthday party. The reason emos are constantly unhappy is that they only get one and they often commit suicide when they get sick of waiting.

The funeral is a tradition enjoyed by many for fun, though it looks utterly sad. It was invented at the same time humans became an earth being, 45 years before the first human died. The history of funerals went from the Triangles of Egypt (to keep their hard-arsed pharaohs in) to the transportation of coffins (used by certain McDonald's food chains). Nobody knows why funerals take place within the death of one, but it's probably because the dead people take up space for the living to enjoy themselves. 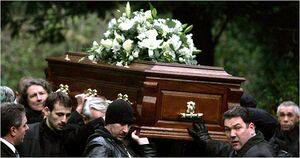 The stages of the funeral are as follows:

People dressed purposely in black to make the entire thing look grim. They also do it to earn pity from the rich. Then a clown car pulls in and wraps itself around a tree, the clown exits its former vehicle and tries to cheer up the grim but secretly happy scene. After 10 minutes of heckling, the clown is kicked out, and the priest is dismissed after a few words.

I'll finish this later, I'm off to play Theme Hospital!

Funerals are not conducted in the same fashion everywhere. In New Orleans, they put the "fun" in "funeral," holding the ceremony in a festive, Mardi Gras style, with pall-bearer races and a funky 70's disco mime MC. [1]