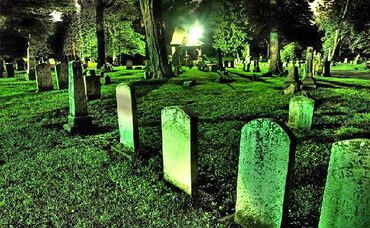 A new crop of shiny tombstones comes up every Spring!

Since time immemorial, man has honored other men, and then some women too, by putting their name on a very heavy rock when they die. They then plant this rock on a piece of ground right above where the guest of honor has been dumped, and later visit it from time-to-time to make sure the rock hasn't wandered off.

Literally called a tomb stone, meaning a stone slab which adorns the "final resting place" of the "dearly departed" who has "passed away" (phrases strongly hinting that someone is "not having a very good day"), it usually weighs about two or three full-grown people. Tombstones are heavy like that to make sure they're difficult to move around or steal, just in case someone else needs one. The ones you can easily grab and run away with, on the other hand, are called headstones, and are made of such cheap materials and weather so badly that they normally go illegible within a few generations.

Surprisingly, few homeowners keep a tombstone in their homes or backyards, preferring to contract for them when the need arises. Even the more well-to-do, who could certainly afford to buy and store lots of tombstones, usually forget to put one on their shopping list for decades at a time, thus badly neglecting their filial duties. Then, when they suddenly "just have to have one", it's all hurry hurry hurry, grab the first "ba-bye" stone they see, never mind the expense, or the color, or the texture. Just leaving everything to the last minute. 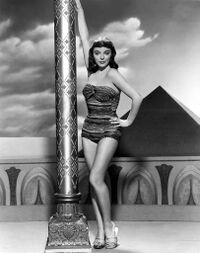 A tour guide at one of those large triangle-shaped tombstones. She'll take you where you want to go.

Tombstones started to appear when humans found themselves with too many large rocks and too little time on their hands. One day somebody saw one of their friends lying there, not even trying to move anymore, and thought "Why don't I put a big rock on top of him?". People took up the hobby, and for thousands of years obtained pleasure in crowning their moveless-others with massive stones. Then, after someone got the grandiose idea to dig a hole and toss one of the lying-around people into it, another guy came up with a plan to "carve" the name and the stick figure of his now missing neighbor onto a stone. This seemed like a good idea, because people could now point and talk about a specific missing guy above his back. So other people kept on "carving" names onto giant rocks. This led to even bigger things.

Some of the longest lasting tombstones can be found in Egypt, where tens of thousands of them were piled one-on-top-of-the-other until they made one enormous tombstone, romantically called a "pyramid" by the local geometry-savvy. A few of these pyramids survive to the present day, but they're so overrun with every Tom, Muhammad and Nancy - haunted-vacation tourists just itching to walk into a tomb - that the families seldom get a chance to visit.

The invention of the modern day portable tombstone - bigger than a breadbox, smaller than a hill, but just the right size to knock over with a good shoulder shove - came about when humans decided they needed something smaller to indicate where they had dumped grandpa. Soon tombstones were cropping up all over the place, too many to count sometimes, and they were getting in the way of planting, and the children were tripping all over them on their way to school, and this was getting way out of hand, so. . .

. . .people decided to give them their very own grassy knolls. Just to keep them out of sight and out of mind. So everyone started to gather up their non-moving relatives, carried them on a donkey or a cart or just hand-carried them to something like a no-mans land. Tenderly gifting them flowers, flags, and little remembrances of home, families made sure that no-longer-Mom-and-Pop[1] had now settled into a large quiet garden with a fence around it, where they wouldn't bother anybody[2], and more importantly to some people, would have a hard time getting out of. Calling these places "cemeteries" or "graveyards"[3] people then began to lug in big rocks to stake out their clan's territory. Competing tombstones soon became one of the main attraction of these places, like a sideshow for city-dwellers, although they were still "thar yonder field where de cows cain't graze no more" for country folk.

As the years went by and nothing much happened in these storage lots, bored children and mentally deficient campfire dwellers just itching to stir up trouble - enemies of the cemetery, as it were - started to make up stories about them. Scary stories, full of ghosts and dancing skeletons and naked witches. And tombstones usually had a prominent and starring spot in these stories, because they just scared people for some reason.

And tombstones had other uses too. Goblins could hide behind them, badgers could dig holes under them, and every now and then someone could deface one with paint and cause a rededication. Pretty soon anyone who was everyone knew about them. These turned out to be pretty important rocks, as rocks with twitter-like chiseled messages go.

One of the best known tombstones is a round one that Jesus was trapped behind after suddenly falling ill. In the bible, if you can believe that scandal sheet, a couple of angels lugged the rock out of Jesus's way so he could walk away from his tomb.[4] Just like that and ever since then, round tombstones have been the "in" thing for Son of God wannabes.

India's Taj Mahal was erected by a rich guy so he could brag about how much he loved his dead wife. She'd died giving birth to the horndog's 17th child[5]. Patting himself on the back with stone, this continually ballooning egotist hired thousands of artists, construction workers, and refreshment carriages to work for over 20 years to put up a fancy nightclub where he could bury his wife. Then right after he was finally able to stuff her in there, he opened its doors to his adoring public. Fun and profit ensued. 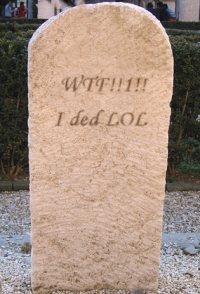 Most people move under these rocks when they get some sick. Here a biographer tells us about someone's life. You don't learn a whole lot from these things.

Some Tombstones have tons of company. In Normandy, that place where the soldiers in World War II - the war to end all wars - captured that beach, has lots of Tombstones. So does Arlington National Cemetery in the U.S., where they scatter stones around on top of the Kennedy crew, a few astronauts, some Supreme Court justices, and three-hundred thousand boys who played with guns. The Kremlin Wall in Moscow is virtually one big tombstone. It's like a cement layer-cake chock-full of Russian heroes and icons instead of chocolate and sprinkles. And then there were those people in Pompeii, tombstoned up the whazoo by Mount Vesuvius. And in some other places the damn things are a dime a dozen!

The future of our friend, the tombstone

While tombstones have now gone high-tech, complete with audio messages, video hellos from grandpapa, and a streaming live feed on the net for the die-hard necrophiliphobiac, the future is even brighter for these ultimate pet rocks. Before long the tombstone we'd all love to embrace will feature a holographic life history of the rags and bones beneath it; will come equipped with fold-out compartments for a bed, writing desk, and television/computer monitor; and will feature a reverse periscopic viewing system with built-in lighting so that you can watch your loved one in real time and not just have to imagine it. Never a dull moment!

Larger models will have walk-in kitchen modules, museum-quality dioramas portraying crucial incidents in the brief-time-on-earth of the person who has "passed away"[6], and a carport equipped with a bed and wine cooler for the comfort and ease of mourners-with-benefits.

Most sane people get uncomfortable, itchy, and break out in hives when they overhear someone talking about tombstones. To accommodate them, mankind has invented many euphemisms so we can all avoid the subject, yet still discuss it in mixed-company[7].

Among the more popular euphemisms for tombstones are "Forty acres and a mule" (the 40-acres are the boneyard, the mule is the tombstone), "Between a rock and a hard place" (self-explanatory), "Buddy, can you spare a dime?" (the dime is the tombstone, "Buddy" is a guy who has lots of tombstones), and "A bird in the hand is worth two in the bush" (the hand is the tombstone, the birds are all dead, and the bush is heaven and all the goodies the two birds will receive once they poke their beaks in there).

A tip for the clueless: Any time anyone talks about anything euphemismy, they're generally talking about a tombstone. Just remember, a rolling stone gathers no moss. So make hay while the sun shines.

Nothing that a well thrown bowling ball can't solve.